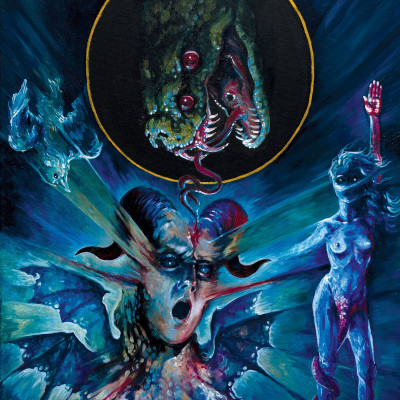 Just look at that cover! Its vibrant green, purple and blue hues pull you into the vortex of Midian-dimension creatures and strange occult abominations. Esoctrilihum, France’s one-man storyteller of monstrous manifestations and mystical worlds of horror, returns with another dense and expansive slab of esoteric black metal magick. Sole member and prolific madman, Asthâghul, has an incredible ability to turnover an immense amount of material in a short time, with new release Dy’th Requiem For The Serpent Telepath being his 6th full-length in less than five years!

Asthâghul is quite the busy man and one of extravagant imagination and knowledge. His albums tell wild and nightmarish tales from the depths of his mind, one that is clearly filled with a Tolkien-esque breadth of vision and a whole universe of pandemonic entities and occult fantasies still awaiting a musical breath of life. The cover art is always intriguing and reflective of its abyssal themes and broad, nuanced music and the song titles are usually equally as inventive and certainly unconventional, with a lot of track names having no real-world meaning, but simply an aspect of the many hellscapes that lurk inside his mind. In this case ‘Dy’th’ translates to ‘Death’.

The immediate blastbeating chaos of ‘Tyurh’ is our first step into the harsher black metal of Esoctrilihum after an intro of two more restrained and doom-paced tracks. Drums tear through deep tremolos and a chorus of organ-like keys and trumpet calls until they disappear into a melodious solo and catchy, raspy riffs. The second half ends more ethereally with female choirs breaking through the dissonance and is one of the many touches that makes this album so grand.

Shades of My Dying Bride and their forlorn doom dirges colour the slow and often beautiful ‘Agakuh’. Drums crawl through pensive and painful guitars into a stunning mid-section of lamenting, cathartic violins and sombre riffs. Give praise to Asthâghul for this unexpected piece of tear-jerking art. The hammer-blow style and old-school death metal assault of possible title track ‘Dy’th’ stamps its mark on the mid-point, which takes a 180 and ends majestically with gorgeous fret work and Asthâghul working in some emotive riff beauty.
‘Xuiotg’ may be the albums most scathing and visceral tracks, with violent blastbeats and abrasive string work that launch into full-on fits of rage backed by haunting choirs and immersive atmospherics. The dizzying riffage and spasmodic pummelling onslaught makes your ears tremble and teeth grind and its volatile nature is reminiscent of early Nathrakh. Instrumental ‘Hjh’at’ closes the album heavy-heartedly with an expressive outro of wretched purging with a miserable cacophony of wind and string instruments that wouldn’t be out of place on a Burden Limbs record.

There’s a lot happening here. It’s deep… abyss-deep, filled with guttural guitar punches and serpentine riffs, ghastly gollum-esque vocals and cavernous ambience all packed into a suffocating and claustrophobic package. It’s by far an easy listen, partly because of the rawness of the production and partly due to its length being over 70 minutes, but is overall a mesmeric listen in the way it coerces you into its void and tempts you with its scope and imagination. Album of the year gets thrown about a lot and in Esoctrilihum’s case it’s too early to say, but what is certain is that Dy’th Requiem For The Serpent Telepath has enough layers of creative magnitude, sheer stunning brutality and intricate detail screaming out from its vast, chasmic noise that it is definitely an early contender. Brilliant.