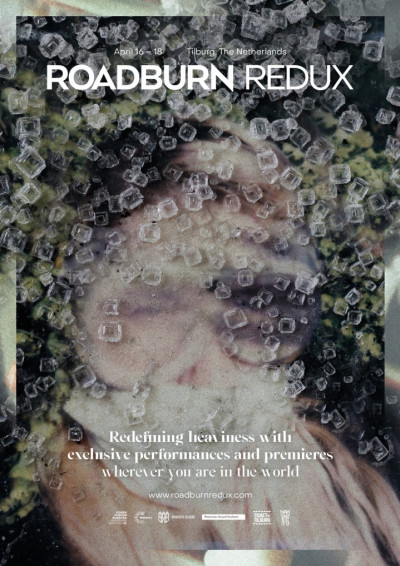 It’s going to be assumed that if you’re reading this, the pleasantries can be skipped. Yes, these are rough times, art is important, we all miss live music and human contact – that much is a given. But beyond that, Roadburn is a massive part of the calendar within so many diverse scenes. It is a valuable platform for labels, it has supported the Dutch heavy scene for decades, it offers events that will never be seen anywhere else, and it provides a surrogate family for outsiders that always welcomes, never judges. Even if you’ve never been, you will still know its significance so having another year without it running is painful on multiple levels. Still, necessity breeds invention and now we have Roadburn Redux, a 3-and-a-bit day long online cavalcade of familiar faces, exclusive sets, new favourites and weirdo jams, just like the good old days.

The schedule ended up being so packed that an extra day was added, with Thursday night seeing two of the most intriguing sets from the festival squeezed into the midweek slot. Kairon; IRSE! was the first of many showcase sets from Svart Records and it was an auspicious start, a subtle but slick jam that paired hazy, sun-dappled vibes with leafy set-dressing and delivered a set that was a feast for the eyes, the ears and the soul. Later, psych stalwarts Tau provided the first commissioned piece of the weekend, the sprawling Dream Awake. It was a gorgeous performance that firmly bridges eastern psych and Irish folk, sometimes earthy and more often than not spiralling out into the ether, and with the addition of Clannad’s Pól Brennan to the line-up, it achieved a level of special reverence that made it the first of many must-catch performances of the weekend. Between this, video premieres from An Autumn For Crippled Children and Noctule, the latest venture for Svalbard’s Serena Cherry, and a few welcoming messages from organisers/figureheads/wizards Walter and Becky, Thursday was a strong indication that Redux was going to blow any preconceptions of what a digital festival can achieve out of the water.

Friday’s schedule was, in a word, intimidating. It was so crammed with premieres, showcases, exclusives, commissions and documentaries that it was dizzying to even contemplate where to begin. Follow the schedule, or curate your own? That’s the first of the upsides to this format, allowing the audience to revisit sets they missed (or simply want to relive) or to pick and choose depending on mood and schedule. Pelagic Records started off their own showcase of new signings, with enPHin, the latest incarnation of Roadburn regular Peter Haydn, and Shy, Low, an instrumental post-rock powerhouse of a trio being two of the most talked-about presences on the site’s ever-popular message board. Later in the evening, Pelagic provided a performance that relied not on unknowns, but on competency, skill and passion – The Ocean, running through latest full-length Phanerozoic II. Though they may have been trapped in a sweaty basement somewhere, it was still an electric run-through that sounded too good, too damn heavy, for words, and anyone who hadn’t already seen them live now has a taste of what lies in store when normal service resumes. 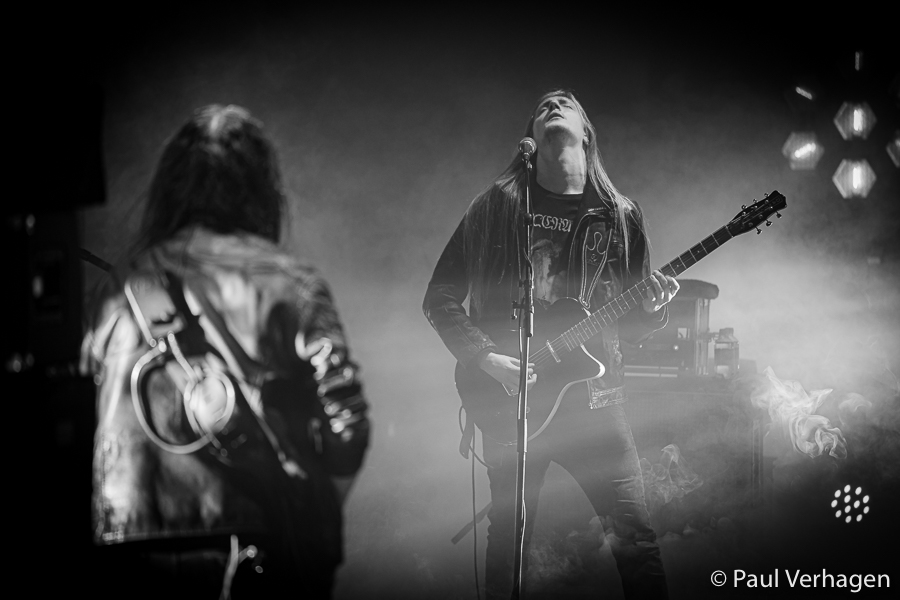 Svart’s Friday highlight came in the form of Dust Mountain, an assembly of Tampere stalwarts on their debut live outing, and it was like nothing that could have been expected. A series of ethereal psychedelic folk jams that drip with darkness, all held in place by Henna Hietamaki’s otherworldly voice – what’s not to love? You want more exclusives? There’s the mighty Nadja, whose sprawling Seemansgarn fused their meticulous sonic minimalism with a grimy visual aesthetic to stretch 40 minutes of droning ambient bliss into an eternity of tonal resonance; there were local heavyweights Autarkh, showcasing their debut full-length Form In Motion in all its twisting, malformed and often unsettling glory live from Tilburg’s 013 venue; and then there was Regarde Les Hommes Tomber, whose Ascension performance flirted dangerously close to black metal cliches but was executed with such fire and intensity that it was hard to fault their devotion to the darkness.

The true highlight of the day, though, came with GOLD and their commissioned piece This Shame Should Not Be Mine. Some statements from the band in advance put the set in context so it was clear that this would be an emotional performance from the outset but this was truly gut-wrenching. Punctuated with stark stabs of violent synths and solemn, languorous melodies, it felt like a typical GOLD set distilled to its core essence, Milena Eva’s voice bold and commanding as her accusatory exclamations of “You lured me in” cut to the quick. There’s a sense of discomfort in listening to GOLD normally, a voyeurism paired with complicity that probes the listener as much as it does the artist, and in this case the unease left us breathless.

As if to prove a point, Saturday was a day that simply did not mess around in terms of content, seeking to satisfy every possible need the discerning music-lover could ever need. You want some dreamy, infectious synth-pop? There’s a live-stream of Spill Gold running through their ecstatic, woozy and dangerously absorbing Highway Hypnosis. Maybe you prefer your synths with a darker flourish? In that case, the newly-formed Haunted Plasma scratch that itch, mixing up motorik kraut jams with freeform psych weirdness, and the addition of Hexvessel’s Mat McNerney on vocals added the spectre of the gothic to proceedings.

Elsewhere, there were a couple of Roadburn regulars who delivered unique, haunting and almost transcendental performances. The first was Anna Von Hausswolff who returned with an assembly of like-minded for a specially-commissioned performance as BADA, merging the physical, the spiritual and the sonic worlds in a subtly disquieting release of emotion. Too weighty to be classed as a jam, too fluid to feel like any composed work you’ve ever heard, it’s a moving spectacle to watch and hear. Then there’s a man who needs no introduction, the inimitable Steve Von Till who likewise assembled friends and visionaries in a gorgeous locale for a set that focused largely on last year’s No Wilderness Deep Enough but still managed to squeeze in a couple of classics. He’s a born troubadour and the intimacy of the setting emphasised both the richness of his voice and the gentle beauty of his compositions; combined with fine camerawork and some exquisite performances from the likes of cellist Lori Goldston (Earth, Nirvana) it’s another one that will be discussed at length for days to come. 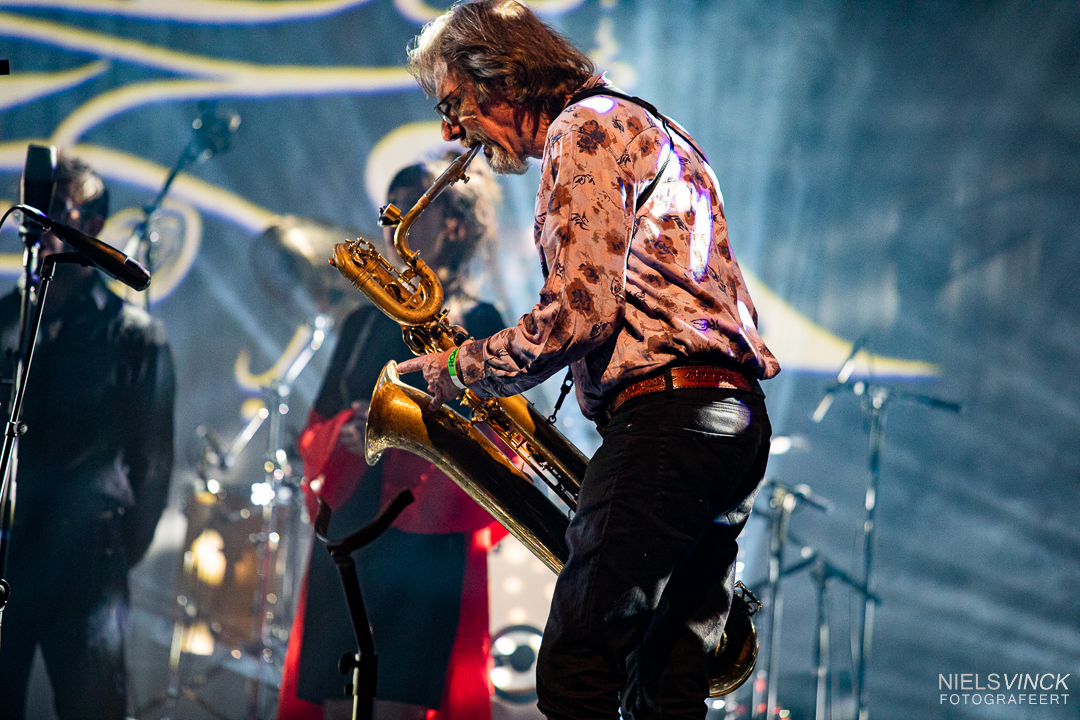 Two of the peak Saturday offerings came from, naturally, the 013 venue itself. Wolvennest reconfiguration The Nest was perhaps the most hyped performance of the festival, given that they had been slowly teasing out the details of the line-up over the previous few days, with names like A.A. Nemtheanga (Primordial) and Ryanne Van Doorts (DOOL) being dropped, and when it finally hit it was colossal. It’s an urgent, powerful performance, bordering on black and folk metal in the loosest of senses but striving for something deeper with each strident, primal riff. The other standout was Neptunian Maximalism’s Set Chaos To The Heart Of The Moon, yet another piece that defied any kind of categorisation. From its sombre circle-chant warmup to the later explosions of percussion and undulating kraut mesmerism, It was occasionally baffling but you couldn’t pull yourself away from the sheer cosmic scale of their sound, so there’s little wonder that come Sunday morning, it was still all anyone was talking about.

What with parting being sweet sorrow and all that jazz, it was heartening to see so many of the weekend’s players throw out a finale worthy of the occasion. For Svart Records, it was Hexvessel celebrating 10 years of Dawnbearer with a full run-through for what might be the first time ever. Unsurprisingly, they opted for a rustic setting to carry out the ritual, faithfully rekindling the arcane mystery of those songs and breathing new life into songs you’d probably forgotten were favourites. Oh, and bringing in Czral for ‘The Tunnel At The End Of The Light’? Now that’s a touch of class. As for Pelagic, they delivered three spectacular sets. Belgian progressive squad Psychonaut and Norway’s Sâver celebrated their upcoming split by giving a glimpse into both sides, and though Psychonaut’s studio supercut highlighted the depth and complexity of their offering, it was primarily the power and grit of Sâver’s skewed sludge that stood out. And then there was CROWN. Though only four songs long, their set was a searing demonstration of industrial might, showing that even though they may have pulled back from the fury of earlier releases, the cold fire that burns on The End Of All Things can still reduce listeners to ash.

One of the day’s surprise highlights came courtesy of US/Australian ensemble Death Bells. Though the jangly post-punk might have seemed outré in comparison to the doom and interstellar wayfaring going on elsewhere in the festival, their sunny beachside locale and its contrast with Will Canning’s world-weary voice made for an uplifting change of pace. And speaking of contrasts, Wayfarer’s set was an exercise in how to do weird, well. Mixing Americana and black metal could have been disastrous but they took the darkest aspects of both and found a gloomy middle ground, slinking between folksy melody and grizzled barrages of tremolo with ease. But of course there was so much more, like Aaron Turner’s setting out on a muted, ambient journey before inexplicably giving up half-way, cranking up the volume and proceeding to absolutely devastate his guitar and any preconceptions of what a bedroom show could entail; or the mighty Might performing Might (yeah, that happened) and, in the grand tradition of all two-piece bands, sounding massive, evil and just plain wrong in all the right ways. 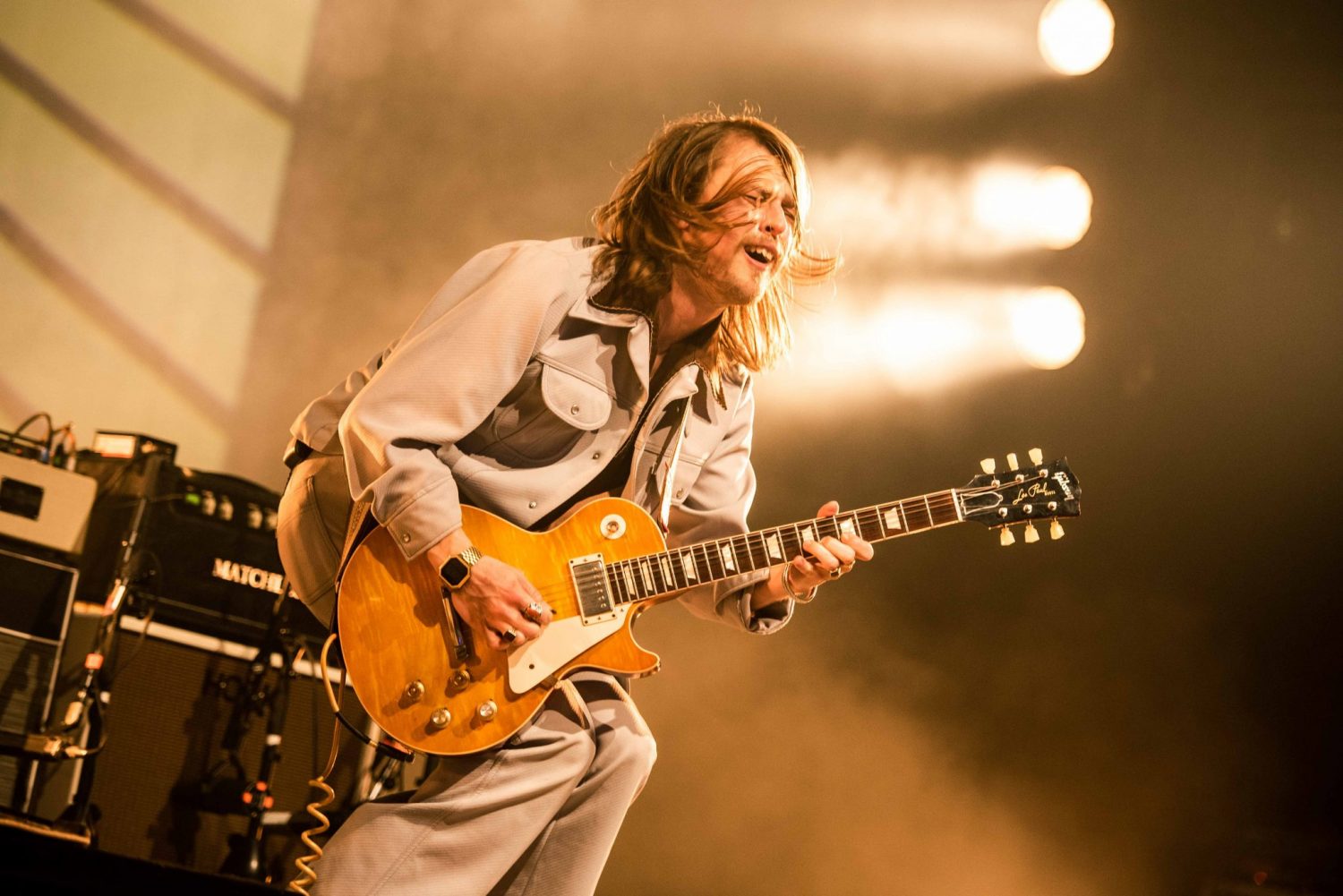 Looking back, what is remarkable is that this all covered only one aspect of Roadburn Redux, namely the live performances, the most traditionally ‘festival’ of elements, but that in no way encompassed everything it had to offer. The documentaries were varied enough to cover full scenes and what-could-have-beens; the Q&A sessions were brilliantly executed, with Marika Zorzi’s interview with Big|Brave being one of the most natural, honest and empathetic looks at music’s power for social change in recent times; the premieres were, without exception, stunning (and plenty are now online to check out, from Big|Brave’s stark ‘Of This Ilk’ to the duet that you never knew you needed nor feared, ‘Twin Flames’ from Lustmord & Karin Park). Calling Roadburn Redux a multifaceted event would be to sell it short, but even beyond the content there was one more point of significance.

For a few days, a festival was created. Online. No geographical borders, no physical limits, no barriers to participation, only a stable internet connection and a few days of alone time. It was maybe one of the most egalitarian musical ventures to have been attempted, not just during this lockdown but ever. People who might never get to experience festivals, be it for financial issues, family or work obligations, physical or mental barriers, or a host of other reasons got to be part of the Roadburn community with the rest of us, and it felt pretty damn great. Tens of thousands of people from scores of countries, all getting together to listen to good music with good friends and maybe have a beer or two? Yup, sounds just like Roadburn.