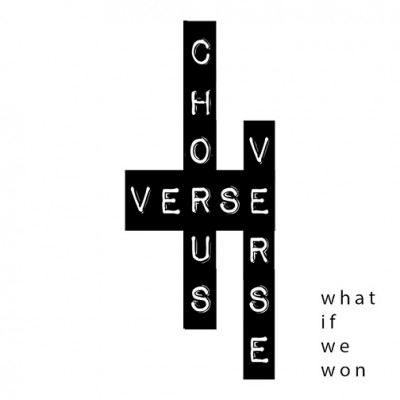 What If We Won by VerseChorusVerse

I have known Tony Wright, aka VerseChorusVerse for around 13 years. I say known, we’ve gigged together, recorded some tunes and kept in contact on and off via social media. But I’ve spent very little time actually speaking to him in person. Tony has spent a lot of his life in isolation or feeling like an outsider. Yet he always makes time for others and his new album what if we won, finds Tony lay out personal and emotional detail that is exceptionally brave. It’s also an incredibly brave album musically, as Tony takes on multiple new genres and sounds with consummate ease.

The past few years have brought considerable trauma to Tony’s door with the tragic loss of some very close and dear friends, a troubled past personally, the increasingly hate filled world and oh yes, that pandemic. He took himself off to Italy for some reflection before relocating to Glasgow, needing to get away from Belfast to reset himself and make some music again. In a dark place, Tony recognised the need to fight back and haul himself back to a level approaching good and so this record exists to document that process. Self-produced and recorded, even the minimalist artwork was created by Tony, it’s a record that he is immensely proud of, and with good reason.

Opening song ‘Algorithm&Blues’ rises up from the ether with a slippery groove of deep bass and a low key programmed beat that is barely there. Unexpectedly, guitars erupt like lava popping and a myriad of weird off kilter tones and noises weave through the mix warping the atmospherics. This is primarily nothing like any music Tony Wright has created before, yet those guitars do sound a little familiar as they zip and ping with punky energy. When I first heard the feisty diatribe ‘Free to Decree’, I wasn’t sure, it seemed scattershot and maybe a little too different from Tony’s previous outings as VerseChorusVerse. But listen closely in the context of this album and it’s actually quite a clever song musically, with the kind of crazed fusion of hefty choppy guitar and funky beats, I’m thinking Prince circa Black Album. There are deep layers of sounds at work and headphones is the only way to decipher them all. Ending with the words “this is what it looks like on the right side of history” the song is there as so positive in its message, preaching love, not hate.

Tony has a much-declared love of Joe Strummer and The Clash and the dubby bass and minimal beats that underpin ‘There Is A Silence’ is perhaps a nod to their forays into that genre. I always yearn for Tony to pick up the electric guitar as he is a very special exponent of this instrument, the delicate tones that shift and shimmer through the track are blissful. Listen to And So I Watch You From Afar and Gangs and you’ll hear just how much of an influence Tony was on those albums, his unique ability with melody and texture was such a key feature of what made those albums so good. Laying his mindset out with complete transparency, Tony honestly delivers “with the silence comes a mirror and with all mirrors come a reflection face to face with imperfection I must stare down my own self”. As this song winds on the guitars do all kinds of crazy stuff as Tony allows himself free reign to jam and build up layers of solos, it’s mesmerising.

Bobby D once sang, “it’s not dark yet, but it’s getting’ there”. Tony has always been upfront about internal demons, through previous songs, interviews and his wonderful book. But in ‘i live with a monster’, it is the most emotionally bare I have ever heard him. The lyrics just tell it like it is and to be so honest and raw takes some serious bravery. Over a sparse reverbed piano Tony is close to breaking as he sings “I live with a monster, it’s trying to kill me”. This is the calm before the storm.

‘rock &/or roll recovery’ rips out of the starting blocks kicking and spitting with a pumping beat and guitars that could cut steel. Tony is fucking raging and transforms into a hybrid of Johnny Rotten, Martin Corrigan (maverick fellow country man who has to be heard to understand the reference) and a foam mouthed manic street preacher. The opening lines “they say the gates of hades are open night and day, smooth is the descent and easy is the way” let you know where the vibe is headed. He must have ventured into a truly bleak place to get to this level of anxiety, yet underneath the angry delivery there is hope, “I still cry daily, but more and more with a smile, recovery takes time, all good things take a while”. I have never heard this gentle soul sound so close to the edge and it’s actually quite shocking, but it’s got to get out somehow, right?

After the fucked up fury of the previous song, the gorgeous guitars of ‘what if we won’ are like a like a warm embrace. The melody is beautiful and the message of positivity will bring a strength and comfort to anyone struggling with mental health. Tony has lost so many close friends who took their own lives and here he is, fighting back, he is a true beacon of positivity and inner strength, a beautiful soul and the world needs more people like him. He asks “what if things turned out alright this time, what if, what if we won…what if we survive our longest night and rise up like the sun, what if we make the darkness light”. The twinkling keyboards that sprinkle magic over the end of this track add another level of emotion to this stunning song.

Like ‘Free to Decree’ the slinky pop of ‘Be Proud’ left me wondering what Tony was playing at, when it was released, but again, in the context of the album it makes more sense. The influence from the legend that is Prince appears again as Tony ventures into a funky rap over a groove that is bursting with energy and little guitary hooks. There isn’t enough timpani drums in music these days either so extra points for that. ‘YouCanDoAnythingSoWhyNotTry (I Is For Instrumental)’ is here to remind you of Tony’s past, it happens to be an instrumental rock song, with a title that combines words into one word. Yep, he was that dude. It’s so good to hear Tony dip back into these waters and the track is bursting with lovely melodies and sounds.

Ending on a blissed out song that Jason Pierce would be proud of, ‘Peacetime;now’ builds up over a hazy backdrop of atmospherics and alien sounds like a message being beamed in from the mothership. Wait, is that a guitar being strummed I hear? And heavenly voices? It is. The song suddenly morphs into a stunning gospel number resplendent with layered voices singing “Lord won’t you give me some peace, I’m so tired, I feel like going home”. This is actual fucking genius. Jaw on floor. The twinkling keys return and I am utterly floored with the power and the glory of this music. Quite possibly one of the greatest pieces of music Tony Wright has ever created.

After one listen, I was truly taken aback at these nine songs. Tony Wright has reached deep into his musical knowledge and knowhow with instruments and created a record that is very special indeed. Lyrically he lays himself completely exposed and the at times the brutal honesty can be unsettling, but sometimes this is what it takes to get to the other side. As I said at the outset, it is an astonishingly brave record on so many fronts and his finest set of songs since leaving his previous band. I think it pertinent to end this review with this quote from Tony himself, “This album is for everyone who has ever felt silenced, it is for those of us that felt disconnected through no fault of their own; it is for the “losers” now, later to win. For the dreamers. For all of us.”