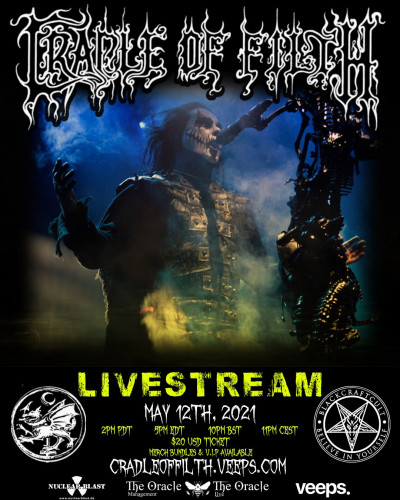 Cradle of Filth at Livestream

“Stay safe, but stay fucking fiiillthy…”. Cradle of Filth have always understood that The Gothic has always been a genre based on the principle of excess – excessive language, excessive violence, excessive sex, excessive monstrosity – and few have channeled it into extreme metal so well. Everything from their delightfully tasteless merch to Dani’s baroquely, pun-laden lyrical narratives to the band’s OTT stage shows has always been true to that principle. Apart from anything else, it’s what makes Cradle’s three DVDs releases so re-watchable – and, since the Peace Through Superior Firepower DVD came out way back in 2005, it’s about time there was an opportunity for more Filthy fun from the comfort of your own home. Except it’s obviously a livestream, because that’s how things roll in 2021.

This Dracula Spectacular, filmed in Colchester, was delayed from January – yes even streams get delayed in 2021 – promising improved production quality and a bigger stage. And after over thirty years of (presumably continual) Cradle of Filth live shows, the gap between tonight’s event and their last live show in 2019 must have felt like an age – or a holiday. But, whatever you may have to say about Dani Filth and co., you can’t call them lazy. Nuclear Blast release Existence Is Futile, Cradle’s thirteenth studio album, later in 2021, and that album number lucky 13 fell during the pandemic can have offered little solace.

‘Cthulhu Dawn’ makes for a suitably dramatic entrance song, and keeps the old-school fans happy. Cradle’s set-up is similar on-stage set-up to their glorious show at the London Palladium in 2019: with platforms at the stage front on which Dani and his guitarists can showboat their sonic pyrotechnics amidst a swathe of real pyros, bellowing flames all over the place. There’s a massive screen at the back, which is also cut into the main stream you’re watching, complete with all manner of B-movie occult imagery, masterfully cut to the music in a manner rivaling Electric Wizard.  There’s no craziness with stilts, caged dancers, dwarves, or monsters, as they’ve used at big shows in the past – and that’s frankly a relief. About five songs in and we get ‘The Principle of Evil Made Flesh’, sounding amazing with gritty bass chords during the breaks, and now the old school really is happy (although I don’t remember that tapping solo in the original!). Actually Cradle’s current line-up works to highlight the dual melodic guitar leads and solos that are such a prominent part of their sound these days. Richard and Marek are phenomenal players, capable of all sorts of tasteful technical wizardry, – and they’re really pushed to the front of the sound, leaving a spaces in mids to bring out the equally fine bass work underneath.

Tonight is all about keeping the band going during Plague Time, of course, but it’s certainly also all about Cradle’s new member: Annabelle Iratni, on keys and clean vocals, replacing Lindsey Schoolcraft, who left to kickstart her solo career in 2020 with debut album Martyr. Given that Annabelle already plays in Dani’s other band Devilment, this comes as little surprise – but, most importantly, she fits in perfectly, immediately. Officially, Annabelle is on backing vocals – and she is positioned in the standard keyboard spot at the back. But the nearly two-hour stream comprises tracks weighted towards Cradle tracks with female vocals more prominent in their mix and arrangement, such as ‘Nymphetamine Girl’, to the extent that she feels like the lead. Her voice sounds confident, sensual, and definitely evil – pronouncing all her T’s on ‘Lilith Immaculate’ in traditional English super-villain style. ‘Funeral in Carpathia’ is the highlight for me – about at baroque Gothic as it gets, and I rewatch the stream twice, mainly with this track in mind.

As one wag points out in the chat, it’s also a set-list geared towards those tracks with music videos; so we get old faithfuls like ‘Mannequin’, ‘Her Ghost in the Fog’ (with formation triple headbanging in the snow) and ‘Saffron’s Curse’.

Tonight it’s clear that Dani’s more exuberant moments onstage (like whipping a hearty “Cunt” call at the Palladium) are motivated by a live audience. I don’t know about you but I sometimes overlook the fact that the audience isn’t there in a live stream; and there is clearly a difference between watching pre-pandemic, aka actually live, on most YouTube gig clips prior to 2020. But maybe that’s the sign of a good livestream, no? That it doesn’t matter if the band’s onstage, or in a rehearsal room, or in someone’s living room, with no one else around – their passion for playing overrides all else. And, like the Palladium show, our erstwhile guitar heroes will happily slip into old routines of lifting the guitar to an (imaginary) audience, mid-tapping solo.

And Dani’s scream sounds better than ever. His style these days seems to involve inserting a brief scream in-between lower, growled passages, in a manner not always present on the albums. It’s a sign of his virtuosity and vocals control – another of the subtle changes in Cradle live performances that keeps their live shows different and relevant. doh dee dee doot, doh dee dee doot. Predictably Cradle finish on ‘From the Cradle to Enslaved’, still a banger after absolutely caning the VHS release throughout my teenage years. After two hours, I could happily watch another hour of this – even if they exhausted their stash of music-vid visuals – and would have liked a new track premiere, but I still feel well and truly satisfied by the time we get the ‘Standard Live Metal Track Ending’: dududu-duh, dududud-duh, duuuuuhhhrrh.

Roll on Existence is Futile!