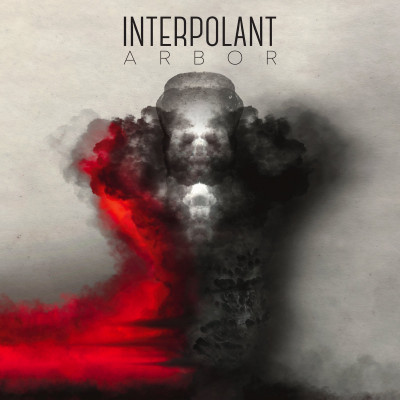 Every now and then you come across music that reshapes your viewpoint of sound and strikes a resonant chord within yourself. Stumbling across Dutch tech-death metal band Interpolant was my newest musical revelation, and one that took me by surprise as tech-death isn’t my usual cup of tea.

Interpolant is the pandemic-born solo project of Tobias Borra, vocalist of melodic thrash band Cypher and brutal death metallers I Chaos. Interpolant take technical death metal and aspects of djent into a dystopian twilight of glowing synthesiser-driven metal, with these elements especially coming to the forefront of sound. Debut album Arbor is a vibrant beast of speedy whiplash metal full of nostalgic keys and futuristic insight.

Lead track ‘Sycamore’ immediately hits you with sonic waves of cyber synthesisers and crushing, scrambling blastbeats, all fired through an unrelenting neon starburst of 80s nostalgia. Knockabout drum patterns and hard, guttural guitar stabs bleed into a finale of glimmering, pulsating synths. ‘Ascendant’ cracks your cranium with an industrialised shotgun blast of synthesisers and blastbeats that tear through chugging riffs and into a mid-section of djenty breakdowns.

The short and sweet Blade Runner inspired ‘Tannhäuser Gate’ gives a quick glimpse into the future with familiar beams of 80s synth notes opening the track into a bruisingly catchy instrumental with glittery sprinkles of starlight throughout. It’s the albums shortest track but has an abundance of possibilities for Borra to spin into a purely 80s inspired soundtrack side project.

Closing track ‘The Cartographer’s Song’ is perhaps the most interesting of the seven, being the longest and slowest at once with Borra’s echoed vocals only appearing once at the mid-point only to fade away, leaving the instruments as the star. The repetitive dj-dj-dj chug of the guitars and rhythmic drum beats and cymbal clashes act as the pulse, carrying the track through even more shining, grandiose synth work and to an emotive close.

Borra does similar to what Violet Cold did with synthesisers on Noir Kid, making it a shining star, only in this case cranked up to a epileptic frenzy. The synths shine, and let’s face it who doesn’t love a good synth and its distinctive evocativeness. Once again the glorious genre of extreme metal proves that you can pair it with an unorthodox element and it’ll work wonders. Borra has hit on something that feels utterly unique and special and could perhaps open up further possibilities of infusing the key aspect of Interpolant’s sound with other types of metal, which would make for an interesting listen.

The intentional pushing back of guitars and the simplicity of their riffs opens the main drive of the album to be the synth work, replacing strings as the flow of cybernetic blood through Arbor‘s mechanical veins, in effect becoming the lead guitar. The pure chaotic speed of the synths act like frenzied tremolos, adding an abrasive rhythm to the music. These synth elements are very present in each track but do not detract from the crushing impact of the music, which still pounds harshly behind every bright key note.

At around 21 minutes Arbor zips by in no time at all and is perhaps a precursor of more expansive things to come, but overall the short runtime of this genre works to its advantage, being short, sharp hits of brutality. Borra has created a sound and album that keeps your fingernails dug into your knees, bracing yourself for that next big blastbeat or euphoric synth attack. Bands like Interpolant and artists like Borra are exactly why this genre of music is so adaptive and long-lasting as they bend extreme metal tradition into another entity, and one that can go on to provide inspiration for bands of the future. Arbor is thoroughly well-conceived and executed and one of the surprise hits of this year.