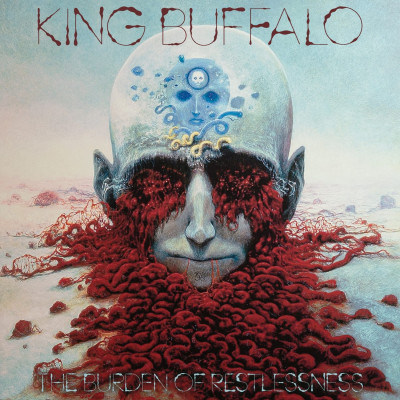 The Burden of Restlessness by King Buffalo

In the last few years King Buffalo have emerged as setting the bar high in quality atmospheric psychedelic rock with a pinch of stoner thrown in for good measure. And while some artists have been pondering whether to wait until touring begins or instead go straight ahead and release new albums right away, King Buffalo have been so prolific they’re planning on putting out three new long-players this year for our listening pleasure. The first of these is The Burden of Restlessness. The title alone smacks of pandemic induced self-isolation as fear, despair, anxiety, and death do indeed form the album’s lyrical themes.

This is sound-tracked quite brilliantly and expertly with an album’s worth of seven masterly constructed great songs, which exhibits invigorating coolness, superb precision, and one hell of a top production from guitarist/vocalist Sean McVay. A band who are already top notch at producing exquisite guitar textures have done it again, but this time around there is an added metallic crunch to proceedings. This is King Buffalo at their most-darkest and aggressive.

Though do not fear, there is still the spaciousness within their slow building deep grooves but this time around there is a significant compactness to the songs. No long double figured length tracks this time around – maybe that’s to resume on this year’s albums two and three. On The Burden of Restlessness, the opening metallic chugger ‘Burning’ reveals ‘another year lost in the wasteland’ as it cranks up the edginess. But this is still edginess which is just so gorgeous to listen to, yes, more crunch in the guitars but exquisite smooth basslines, and every track is so carefully arranged there isn’t a millimetre of fat anywhere across the album.

Every track is pure class and so coolly assembled that I will just simply focus on the some of the extra delicate touches that had me swooning with delight. The additional haunting synth in ‘Grifter’ as the song builds to King Buffalo going wonderfully metal. The smooth bass line in ‘Locusts’ as the intricate guitar melodies evokes Amplifier at their most cosmic. ‘The Knocks’ one note piercing soloing before unleashing a short but blistering frenzied guitar solo, which leads to a fantastic sheet of noise reminiscent of early Mogwai. And the exhilarating first high kick of metal riffage in ‘Loam’ all form some of the wonders in an album that never dips from exceedingly high quality.

King Buffalo have demonstrated how to put restlessness into great effect as the more I listen to The Burden of Restlessness the more I believe it’s a master piece. Not a term I often use or say lightly. If last year’s Elephant Tree’s Habits album reached new levels of excellence in the current underground rock scene, then The Burden of Restlessness is this year’s crème de le crème. I can’t praise this album high enough. It’s fantastic! I urge you to check it out.