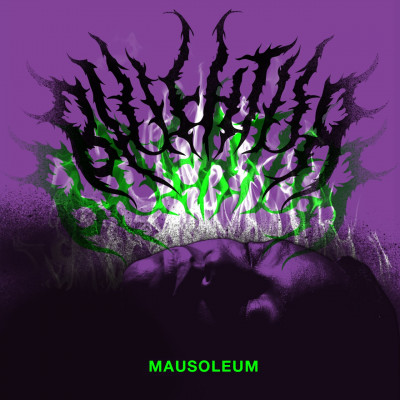 Blue Ruth has been in the house too long. Leaving the curtains closed, days losing shape. Dark thoughts and discordant electronics fill Mausoleum, the debut of a new solo project from Kaila Whyte of fiery punks Youth Man. Synth based, blown out and sickly it’s a shut-in’s death disco of disfigured beats and fried industrial tones. The title track’s thick bed of static fuzz is pierced by keening feedback and carries some fully goth lyrics “Late night, lonely, I go down to the mausoleum /Altered, chemically, I get down in the mausoleum”

Strictly speaking this isn’t a ‘lockdown project’ but the unusual circumstances of the pandemic have surely accelerated and shaped it. On a purely practical level, Youth Man were already on hold and Kaila found herself furloughed with time to work and work alone. Similarly, Supersonic Recordings might not have reanimated to release it if they’d been busy with all the usual business of running their magnificent festival. Tinkering with second hand hardware and a pile of guitar pedals Mausoleum is what you get when a bored and creative hardcore kid is stuck inside plugging things into each other and trying to surprise themselves.

It might be sombre in mood but it’s also playful and exploratory. There’s a looseness, a beginner’s lack of rules and habits that makes it feel wide open. The six tracks sketching out different shapes. Agitated bass bumps under slow smears of synth on ‘John Wick’, while the prettier tones of ‘Pure’ lull you before twisting into some of the EP’s darker lyrics. On ‘Freshhh’ the bass becomes a slurring, unstable tide, distorto vocals and a weird whistling mice loop bobbing on its surface. The closing ‘Wide Eyes’ briefly gets a unified techno thump going only to be taken by the fear.

The opening track ‘Almost Gone’ is the real standout. Stuttering into motion it cuts from gothic to domestic to bleak as if wandering from room to room half awake. Growing in noisy intensity like a malfunctioning machine it’s wonderfully erratic and atonal but still holds on to a diseased pop groove. Her vocal is great here too, switching up from low and conspiratorial to high and sweetly melodic on the chorus. And for those us blessed with ears to hear it there’s a particular joy to be found in the soft corners of her accent.

A mausoleum is a building for burial above ground. Not a huge stretch to read it as a metaphor right now but the image I can’t shake off is moths. As best as I’m aware there is no Blue Ruth moth and yet, nocturnal, fluttering and ugly-beautiful, they seem to fit. In folklore moths were thought to be messengers of the dead, so maybe they get down at the mausoleum too. This isn’t death music, it feels unfinished but alive with possibility, transforming, growing, mutating. Just emerging from its cocoon.