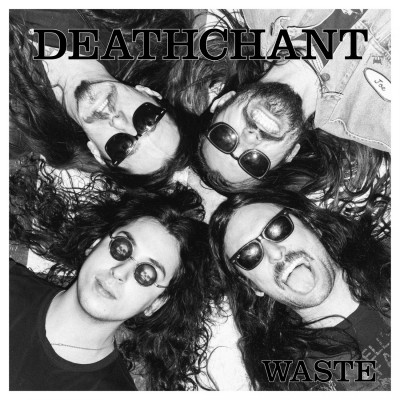 In troubling times it’s easy to fall back into the comforting familiarity of old sounds and favourite bands. And then there’s that fact that submitting yourself to extreme noise can be kind of cleansing. So when I read that Cali quartet, Deathchant, had been likened to a cross between Thin Lizzy and Melvins, I was definitely willing to commit. Like, what could go wrong?

Yeah, you read that right – Thin Lizzy and the Melvins. So how does that work? Well, imagine that Phil Lynott has fallen down a well, he’s probably had a couple of shandies, and then the Melvins, and Motorhead, who’ve popped by to drink the rest of Phil’s shandies, decide to do an adhoc recording session and so lower a microphone down the well. Clear?

It doesn’t all sound like that, to be honest, but most of the best bits do. Deathchant clearly think they’re onto something, as this is their second album of this stuff and Riding Easy Records obviously agree as they’ve signed them and have released Waste on June 25th (that doesn’t sound particularly nice, but you get my meaning).

If you want to get a very quick and accurate idea about where these dudes are at then catch recent video for ‘Holy Roller’. It’s typical Riding Easy fare – greasy, longhaired biker types, working on their hogs, dropping mushrooms, chugging beers and axing people to death. You know the drill. The song itself rides a nasty, vicious Tad-esque riff, full of evil intent, it’s in a hurry to get to a bad place. Having said that it’s still a surprise just how much of the classic British hard rock sound makes up the DNA of Deathchant. ‘Holy Roller’ contains a slower passage with a bridge that could easily have been penned by Scott Gorham. The band really isn’t taking from your typical stoner wellspring – along with Lizzy there’s a whole load of Wishbone Ash, Uriah Heap and early Maiden influences swirling around under the bong smoke and feedback.

The band record live and singer/guitarist J.T. Lemieux has said that “Improv is important to us and always has been” and a seat-of-your-pants vibe is certainly evident across the album, although usually not in a good way. Several of the songs here, especially the instrumental ‘Maker’ and the title track ‘Waste’ sound like a grab bag of overly used riffs played energetically in the hope that if they keep going they might coalesce into a song. Lemieux’s vocals are heavily buried in the mix on opener ‘Waste’ but on second track, ‘Plague’, the Lynott comparisons start to emerge. The whole track is brighter, cleaner, with duelling guitars and more melodic vocals. The song hangs together across its time changes and actually feels like the arrangement has been agreed in advance. There’s a decent chorus too that actually could have been driven home more frequently, but instead there’s a long instrumental passage that dilutes the power of the song. Close, but no Camberwell carrot.

The pinnacle of their “sludge Lizzy” schtick is ‘Black Dirt’, a swaggering, gritty, swashbuckler with fine twin guitar heroics and some decent classic metal-style soloing. Also good, but leaning heavier on that NWOBHM sound are ‘Rails’, which has a punk metal Killers-era Maiden attack, (although Lemieux still sounds like Lynott), and ‘Gallows’ which could almost be Wishbone Ash with Paul Di’Anno on vocals. The song does venture into filthier furrows though and the live recording does give everything more edge, but the rough and ready production still manages to allow the bands more classy predilections to emerge.

Fun but frequently frustrating, Waste might be a little too on the money as a title. Deathchant are certainly onto something, but at this point it seems too mercurial for them to take a firm hold off, constantly slipping through their oily mitts.