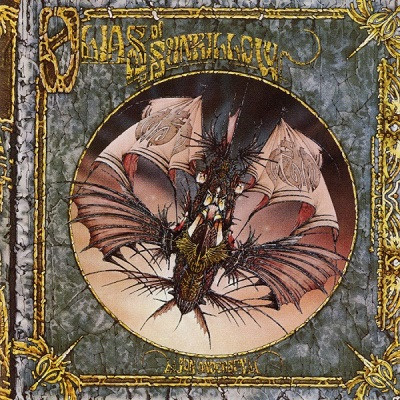 In 1976 Jon Anderson released his conceptual and ambitious debut as a solo artist entitled Olias of Sunhillow. Considered by Classic Rock Magazine’s top 20 Maddest Prog Albums from issue 97 in September 2006, and championed by Steven Wilson who put in his top 10 amazing guide of concept albums you never heard of, Olias of Sunhillow is the imaginative sci-fi animated movie that is brought to life from Jon’s view about an alien race and their journey into a whole new world.

Between 1975 and 1976 after the band had completed their tour promoting their seventh studio album, Relayer, the members of Yes went ahead and took a break by focusing on releasing their own solo albums. Steve Howe released Beginnings, Chris Squire’s mind-blowing Fish Out of Water, Alan White’s Ramshackled, Patrick Moraz’s out of this world debut for The Story of I, and Jon Anderson’s Olias of Sunhillow.

Originally released on the Atlantic label in the summer of 1976, and reissued by the good folks from the Esoteric label, Olias of Sunhillow is a movie inside our heads. Inspired by two books that Vera Stanley Adler wrote between 1938 and 1938, The Finding of the Third Eye and The Initiation of the World, Anderson wanted to take Adler’s stories about the four nature tribes who lived on Earth in a different landscape of musical boundaries, was something beyond that Yes were doing.

The story is about the four tribes on the planet Sunhillow. They are named Nagrunium, Asatranius, Oractaniom, and Nordranious. Four of them represent a different atmosphere of their musical conscious, but something terrible has happened when a volcano erupts and threatens to destroy their home planet. So the only way to escape is to head to a new planet. One of the helpers is a magician named Olias, who builds this ark called the Moorglade Mover.

Let’s get straight into the album. Jon who doesn’t just sing beautifully, but plays all of the instruments throughout the story. To paraphrase the late great comic book writer from the mind of Harvey Pekar’s introduction of the 2003 film American Splendor, “So if you’re the kind of person looking for romance or escapism or some fantasy figure to save day, guess what? You got the wrong movie.”

Don’t expect this to be a gigantic Marvel Cinematic movie, this is Jon’s vision of his epic movie brought to life. We start out with the burst of the beginnings of the Sunhillow planet of ‘Ocean Song’. Droning vocals, angelic instruments, and acoustic synths filling up the dawning of a new day for the alien creatures waking up to start a new day as it segues into ‘Meeting (Garden of Geda) / Sound Out the Galleon’. Jon chants in this new alien language as the sun bursts out of the sky for the lifting epic sound for the gardens to finally have this meeting with the magician building this ark to escape the lavas of hell as they sail towards their journey into finding a new life planet.

‘Dance of Ranyart / Olias (To Build the Moorglade)’ harp-like beauty sets up the construction of the ark while the synths sets the building for creating this massive ship to fly into the unknown. And then it goes haywire and then the ship is ready for the lifeforms to be aboard on their adventure that awaits them.

‘Qoquaq Ën Transic/ Naon / Transic Tö’ sees Jon travelling into the Faerie Symphonies and the masterminds of Pink Floyd’s Richard Wright during his synth introductions for ‘Shine On You Crazy Diamond’ from the Wish You Were Here sessions. It does have a lukewarm feeling to it. You can hear Jon singing melodic lines throughout the keyboards as he lends a helping hand to see what Olias has in store for his passengers aboard the ship. It then takes a dramatic turn for this middle-eastern tribe as the chaos occurs for this booming vibration for some chanting and intensive percussion work that gets the temperature levels boiling red hot for Tom Newman’s production work.

Then on ‘Flight of the Moorglade’ it becomes a brand new day after going the nightmarish storms and knowing that the love of singing about exploration to view various life forms, give us a chance to take a breather. Jon returns back into this epic form of a waltz as if Tangerine Dream have lend Anderson a helping hand to go into the Rubycon voyages for some ‘Solid Space’ while all hell has broken loose on ‘Moon Ra / Chords / Song of Search’. This is where they land into some trouble with panic attacks, confusion, and disorientation which makes it chaotic for its fellow travelers.

It starts to rise more and more with Jon’s vocals going upwards to the heavens as the volume increases even with a maximum punch before the clouds bursts to know that they are free for a bit with this mournful church organ-esque epic turned into a folk-like acoustic relief that finally the danger is over and landing at the right planet. ‘To the Runner’ closes the album. Making it as a celebration after embarking on this exhaustive, but mind-blowing journey to find a new home as it becomes a sing-along chant. But for the synths to make it warm and relaxed to finally arrive in Asugard, the main characters reach the mountain tops and finally become one.

Recorded in four months at Anderson’s country home in Seer Garden, Jon was very careful with the album, not knowing if the other members of Yes would like it or not. But one who wasn’t crazy about it was the late great Ahmet Ertegun who thought it was confusing and questioned about the alien language Jon had come up with. But when Vangelis listened to the entire thing, he loved it.

Listening to this album, is like an alternate score to the 2013 unsung computer animated classic, Epic featuring the voices of Beyonce Knowles, Josh Hutcherson, Amanda Seyfried, and Colin Farrel. But while Anderson is working on a sequel to Olias, this is an album that alongside Song of Seven, gets the recognition it deserves. The booklet contains liner notes done by Malcolm Dome who did an interview with Jon about the genesis of Olias of Sunhillow. It also includes, promos, posters, reviews, portraits of Jon and his family, music transcripts of ‘Ocean Song’ and ‘To The Runner’, and a master tape of the album.

Whether you get Jon’s story structure or you don’t, you have to give him a huge amount of credit for being very careful of bringing Olias of Sunhillow to life. For me, it took me a long time to accept this album after reading and listening about it in Classic Rock Magazine during the fall of 2006. Now it’s been 16 years later. And while it came out originally in 1976, it is Jon’s unsung masterpiece. And before you put on his solo debut, play the spiritual voyages of Tales from Topographic Oceans and then travel onto the Moorglade with Olias himself.