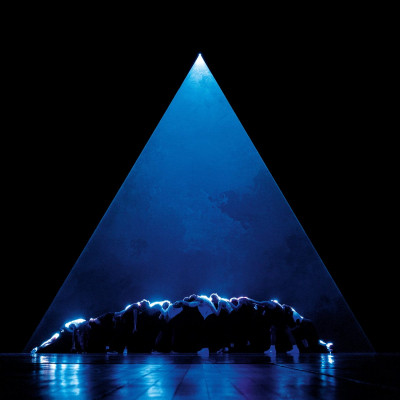 Frontera by Fly Pan Am

After a long time of our own, Gareth Watkin (a massive fan of the band’s label Constellation Records) insisting that I listen to Fly Pan Am, I finally gave them a go and found their music to be quite palatable to my interests. Not too long after this landed in our inbox. Unfortunately, I got snowed under by a broken laptop and was unable to get my review out nearer to the time of release. However, hopefully, some of you folks reading this will be discovering the band or the album for the first time, as that is the exact reason I write these reviews in the first place.

A satisfying crunch opens the album, followed by a patient silence. Listening through speakers, I initially wondered if something had fell outside but, as soon as another thud came in with the beat, I had decided that ‘Grid/Wall’ was a really cool way to start off an album. The light glow of the albums pads and electronic sedately tape hiss is as tranquillising as the beats are hypnotic. Frontera is quickly established as a pretty wonky album with ample delay and strong late night atmosphere. The bizarrely distorted guitars and programming drag the listener through the haze of a technicolored rave, bodies oscillating in rhythm, visuals distorting, trailing lights and disorientated directions. Magnetically pulling the listener further and further in with rhythm and trance like melody. Somewhere between dance and shoegaze. Somehow between HEALTH and Stars of The Lid. Ambient and blissed out, but also electronic and hyped up.

‘Parkour’ opens with enrapturing rhythm and pounding bass. Simply put, it’s just fucking great. I love it! I was totally sold on the whole album in under ten minutes. The synths are fucking great as well. Everything sounds like it’s been played really well, then ran through a computer that’s been set on fire. My favourite part is when the vocals burst in like the ghost in the machine, distorted screaming amidst the swirling electronics and pulsating rhythms. Really cool track.

I feel like ‘Scanner’ is where the album takes more of a different direction, it’s a kind of ominous ambient-noise track, that kind of reminds me of GNOD’s ambient passages, that tend to get quite hectic and abrasive with electronic elements or jazz instrumentation. It almost sounds like a Tesla coil zapping and pulsating away. ‘Scaling’ only takes the ominous noise-aspect further and basically goes full Horror soundtrack, cave-diving, deep, dark ambient. Whatever drug-induced high you wanna compare the first couple of dance tracks to, this is definitely its comedown.

‘Parkour 2’ completely flips things on their head again though, bringing the album back into the sway of its former tracks. I imagine these tracks would be a lot of fun at a gig. The end-section with the choir keys/synths is so mesmerising, I had to listen to it about four times in a row the first time I heard it because I enjoyed it that much. Excellent stuff. ‘Body Pressure’ acts as a nice bridge between ‘Parkour 2’ and ‘Fences’ and once again really highlights the production of the album and how good everything individually sounds. ‘Fences’ highlights this album as a kind of narcotic passage through unfamiliar territory with it’s pitch-shifting, arpeggios and gentle dissonance.

‘Frontier’ closes the album and just as the album’s opener, it begins with thudding rhythms. I like the greater focus on bass in this track, overall, it feels a little less dissonant and unsettling, which adds a nice sense of balance to the album as a whole. The track escalates slowly, adding more drumming, awesome swirling guitars (or synths) that sound like a thousand swirling daggers and just when it seems like it’s gonna build into something really huge, it pivots into sounding a lot more like a huge fucking jet engine; not too surprising for a band called Fly Pan Am.

Frontera is an album that I can see myself working to in the daytime or spinning at 3am whilst totally off my fucking face and to me, that particular versatility is the sign of a great album.