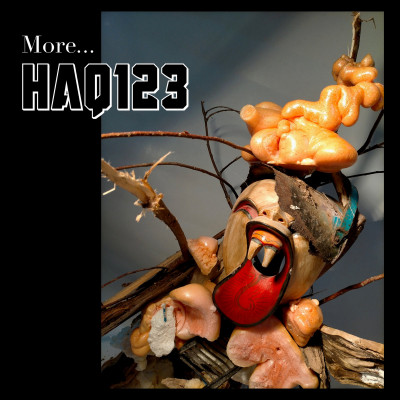 The fifth album from Birmingham’s teen titans Haq123, More sees them further honing their attack, condensing down their weirdo sludge punk into gut punch blasts. On their last album, 4, the ambient/prog synth and filthy sludge metal ends of their sound moved closer together than before. That continues here combined with a purging of anything superfluous. No lengthy horror drones on this one, it’s tougher and quicker on its feet, tearing through 13 songs in just over twenty minutes. Like a youtube super cut of their unique magic realist world. Less is more, as they say.

Last year they put out two albums that got exploratory, pushing the basic elements of the band out in all directions. Letting things unfold and expand. Gong epic ‘Denis and Roger’ was almost as long as this whole album. Never a band with time to waste the urgency of their work rate transfers into the songs here, zipping past in under two minutes, sometimes less than one. ‘The More’ rolls in on a fair old clatter from the drums before the fuzz bass and Dalek vocals kick in with a series of ominous declarations. What in the past might have been different sections of the same tune become separate songs but still tumble into one another leaving you little space to breathe. ‘Human Remains’ absolutely rips, a rubbernecking drive-by with queasy synth like ghosts departing the ruined bodies.

On ‘Day Trip To Ogmore’ a light and breezy, almost fairground, synth part takes centre stage while Millie cheerfully inquires about the demise of what we hope is a wasp, “hit it again, make sure it’s dead.” Loosely the songs alternate between uptempo ragers and more churning episodes. Longer and more like their older tunes ‘Fly Harmer’ seems set for a dose of wing pulling grimness but it turns out to be a measure of disapproval for the unmourned dead, “crack open the funeral champagne” it concludes. Millie is still gruesomely funny but she’s also fiercer too. Her voice getting stronger, more versatile. There’s some impressive full throated yelling on ‘Know It All’, a Fall-like chugger with some Casio meets tannoy keyboards to seal the deal.

More was due to be launched at a gig with fellow Brum sludgers Rainbow Grave, it was going to be my first one after all the 2020 joy but got pushed back because somehow we just can’t stop getting lockdown wrong. Always fun live, some of these songs are going to be great additions to the set, can’t wait to see them do the bouncing ‘Build ‘Em Up’ or ‘Oblivion’ which is so bright and rolling it’s positively perky on its way to the void. On final track ‘Th’Ole’ a great intro from Zac pushes us into the existential cave, floating in some dim lit subterranean dub space with heavily treated vocals and sickly synths echoing off the walls. It’s a pleasingly wonky end to a more direct album. On the whole More is concentrated, leaning into their punk side with its concision and attack. Their sound reduced down into dark bitter shots, double strength and gritty. The unfortunate, disfigured, head on the cover a perfect illustration of its surreal violence. The band claim it’s more of everything you already love about Haq123 and it’s difficult to argue. Five albums in four years and still getting better.