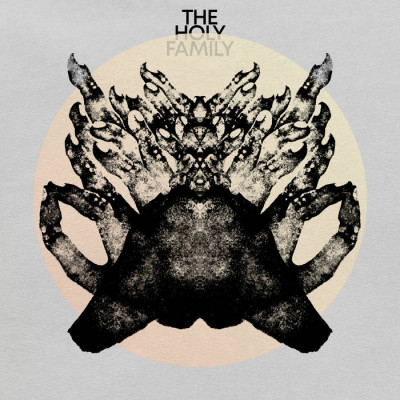 S/T by The Holy Family

What kind of foolhardy sonic adventurer would launch a new band with a double album of mind bending psychedelic rock? Not the fragrant chanteuse Olivia Rodrigo – at time of writing bothering the much coveted number one slot on the UK charts with ‘Good 4 U’. No doubt Ms Rodrigo’s “People” would advise her against sailing such a career-destroying course through the tempestuous waters of commercial pop. Much better to “do it for the kids” (or indeed, The Kidz). No, no pilgrim, The Holy Family are the ones to press-gang you aboard their leaky galleon and fare the sonic seas to the whirlpool of oblivion.

Who are The Holy Family you may ask? (Apart from the obvious, you may add), do they similarly, like Ms Rodrigo, have “People”? Well – yes – just not those sort of people – The Holy Family are the latest alien force to burst out of the chest of the space-cadets that are Rocket Recordings. In an uncertain and now plague ridden world Rocket Recordings will never let you down and we have come to rely on them for our space rock fixes, for our journeys to the Never-places.

Piloting this stunning album is the psyche-soul shaman David J Smith; his crew: Kavus Torabi, Emmett Elvin, Sam Warren and Michael J. York collectively from such fellow ghost ships as Gong, Guapo, Chrome Hoof, Utopia Strong, Coil. Together these cowled and pestilent necromancers have performed ceremonies, made sacrifices, observed the uncanny rites, to produce this extended head-trip into 70s folk-horror, murder, and the disintegration of ego.

The picture of David J Smith looks on. Impassive behind sunglasses, hat askew, a malevolent familiar on his shoulder – do we now regret taking his hand to be led down roads unknown? He claims this is a detective story – but Bergerac was never like this. Inspector Barnaby was never found laughing/crying naked on the streets of Midsummer. OK – Morse did go to a rave, but that’s another story to tell our children by firelight in the mutant haunted wreckage of our long dead future Earth. What does the detective do? They solve a crime, and for a short moment put a plaster over our shattered society? But often at what cost? Alcoholism, PTSD, failed relationships? Here Smith conceives of a detective as an acid-head – but it seems no answers are offered, save those we find by turning our inner eye upon ourselves as the waves of the music draw us under.

What can you cling to, traveller, as every thought you’ve ever had is melted down in the face of this lysergic onslaught? From the opening bars of ‘I Have Seen The Lion Walking’ our ears are first teased, then gradually bombarded with sounds and scenes to befuddle the unwary, to bring confusion to our certainties, to make a liar of our oh-so-cool exteriors. Is it a record or is it the key to unlocking portals beyond the crooked path? And as the intensity increases – are we lost for two hours in an album, or are we in fact pursued, hot with acid sweats, by the soul hungry minotaur through a briar labyrinth to an end which is not only uncertain, but will infinitely alter our puny minds?

By the end do we even have any answers? Does anyone? ever? We are become husks, become fissures of men, we are now their acolytes and will journey with them forever more.