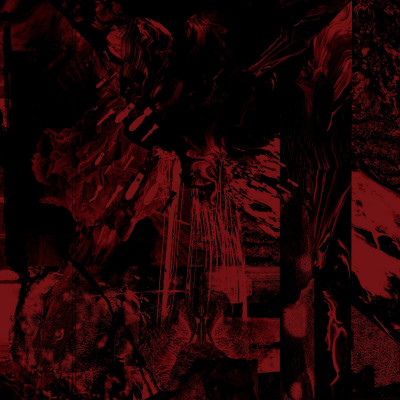 The Doorway by Vessel Of Iniquity

UK based conduit to unspeakable horrors, Vessel of Iniquity, play the most extreme of black metal with ear-scraping noise elements and dark cacophonies of pure terror. Sole member and constructor of hellscapes A. White, whose other projects include Thoraxembalmer and wicked experimental black metal band Crown of Ascension, takes no prisoners achieving the utter violence of Vessel of Iniquity’s claustrophobic sound.

With nine new tracks on offer, new abomination The Doorway opens the infinite horrors that previous full-length The Key unlocked. Monstrous guitar chords and striding drum strikes lead intro track ‘A Glimpse of the Pattern’ into satisfying audial hellfire and a cranial stomp of frenzied blasts. There’s a slight feel of Anaal Nathrakh’s ‘Castigation and Betrayal’ with its burst of uncontrollable rage and breathless speed, and that giddy feel of demo-era Nathrakh certainly feels strong on this record.

The stunning ‘Dying’ is an absolute ungodly beast that is best devoured when one doesn’t require use of their ears afterwards. A perfect funeral number when being fed to the worms! The cavernous ‘Self Not Self’ traverses through thick clouds of doom, frequently boiling to rabid eruptions of seething, demonic ferocity. ‘Ascension’ is a quaking mass of guttural tremolos, swirling ambience and pitter-patter drums with occasional volatile outburst into hyper-blasting. Two great tracks that progress into something more than just straight-up blastbeats and vomitous, abyssal noise, that demonstrate White’s flair for a developing soundscape.

The Doorway thrives on its ability to scare the pants off you with a sound some would find hard to endure, which in this case is part of the selling point. It’s music that’s so unforgiving and raw and densely packed into sheer aural assault that it simply sends you into a spellbound and mesmeric state of utter transcendence, that by the album’s end you’d swear you’ve had your skin flayed off. It lacerates with its flailing, dissonant background riffs that often melt into the unrelenting drums and become like the feint buzz of flies swarming around a mauled carcass. The blastbeats are programmed to devastating effect and are one of Vessel’s focal points. Raw, untethered and absolutely freaking insane, they spread like hellwaves to the unfathomable blackness below.

It’s not all fireballs, 12 minute epic ‘By Allusion Called’ is a slow trudge through atmospheric nightmares with its grunting guitars and gnawing, staticky background noise. The unsettling ‘Three Drops of Milk Before Retiring’, which my wife swears is something to do with witchcraft and summoning the Devil, continues the dreaded ambience with only a short stab of abstract black metal at its end.

Since debut album Void of Infinite Horror hit in 2019, Mr. White has consistently taken his music into more extreme territories and developed his sound further and further. The Doorway is another step in the right direction and a sensory overload of explosive black metal twinned with abstract and immersive harshness. The Doorway may be a hard listen for some but for others this is a glimpse into as perfect as savage audial terror can get.