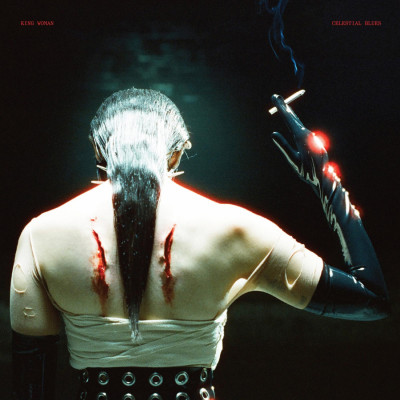 King Woman return with Celestial Blues, a second full-length record that I think of as their third since the initial four track EP Doubt was so fully realised it felt like a proper album. It took quite a few listens to get to know my way around it, but having given it that time it’s everything you want from a new release. It keeps all that was unique and powerful from Doubt and The Hierophant, but expands the scope and pushing the limits in places.

The most distinctive ingredient is of course Kristina Esfandiari’s vocal, partly the cough syrup tone (which here runs across more stylistic variation than previous incarnations), but mostly the brilliantly unusual phrasing. The doomgazey, spiky, slowish but urgent riffs and stark rhythms are comprehensively mastered by Peter Arendorf and Joseph Raygoza respectively, but its the way the vocal lines are delivered that makes you sit up and take notice: The intonation of syllables is languidly draped over the contours of the riffs, stretched out and strung out… Sometimes whole words are hastily pushed along, or a single syllable gets melted down and smeared all across a whole melodic horizon, or there’s a sense of patient/impatient holding off of harmonic resolution until she’s reached the end of some esoteric but, for whatever reason, intensely necessary roundabout route before an unlikely perfect ending on the right note at the right time. In the opening track, the line ‘I never felt like a normal person’, seems lyrically ordinary enough for outsiderish doom for sure, but here the first six words are hurried along until the first syllable of person prompts a wild unpredictable excursion before getting left out way late, prompting a hasty inhalation of the second syllable in order to get to the next phrase. The effect is fantastic.

Or at times there’s a kind of mumbling incantation feel, voices doubled as if in a kind of melancholic mirror, or pushed along through measured repetitive lines, that can simultaneously evoke a going-through-the-motions dissociative response to trauma, and a gothic sense of zombie ritual. This is quite the combination, but given the striking intensity of the performance of lyrics that make an apocalyptic refraction of the deeply personal, it works. There’s an expansion of vocal experimentation too, such as in the breathy, rhythmic ‘HaAH!’s that inrtoduce ‘Coil’ and also arise in ‘Psychic Wound’, as well as a pushing to more howling screeching extremes as in ‘Entwined’ or the viciousness of ‘Boghz’.

These reappearances tie the album together, as do some of the structures. More than previously, the songs made me think of a kind of weirdly stretched-out, nightmarish Pixies feel, for the famous quiet-loud contrast, but also their crushing-floating joinery between grumpy, grungy moodiness and a sublime melodic pop sensibility. There’s something cinematic, maybe movie-trailer-ish about the first 50 seconds of the title track, you catch the phrase ‘spirit of death’ in Esfandiari’s whispering vocals over atmospheric chiming. Then there’s a sudden lurch, like the unexpected acceleration that gets you in the back of the neck in a car, or waking up suddenly from a dream, swerving into a noisy riff and siren voice wail.

The titles and lyrics also lend coherence, taking obscure religious themes that were a bit more implicit in previous outings and making them more central, as is evident in ‘Golgotha’, ‘Paradise Lost’, ‘Morning Star,’ and in the latter, the iconic chant of “Lucifer… falling from the heights”. The cover image of Esfandiari as de-winged smoking angel encapsulates this brilliant new record which in an electric storm of sonic light and shade, articulates personal experience in gothically apocalyptic terms.