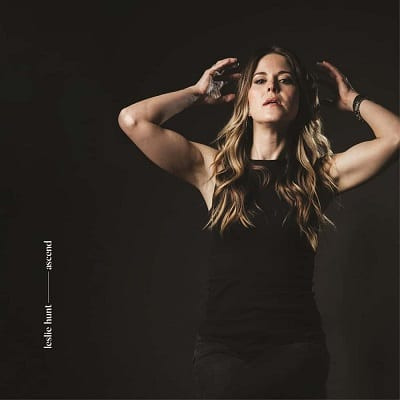 Leslie Hunt has come a long way playing music. Since playing piano and singing at the age of four, coming to recognition during the sixth season of American Idol, having three solo studio albums in the can, and being in one of the most powerful prog-rock bands with District 97, she’s broken free of being typecast as being the top female vocalist on American Idol. She is doing her own thing, and there’s not a single stop sign for her.

Her latest solo EP Ascend released on the Spirit of Unicorn label, showcases Leslie at her best. With honesty and beautiful structures that are like a movie inside your head, it is quite an adventure that is brought to the screen. I remember ten years ago when I was in college reviewing District 97’s debut album Hybrid on my blogsite, Music from the Other Side of the Room. I gave it a good review during that time frame. And then I had completely forgotten about them. Until listening to Hunt’s EP this year. It is a mixture between Art, Pop, Country, and Folk rolled into one. It is a trip down memory lane with the songs dealing with how we felt about being in love. For Leslie, she pours her heart and soul throughout the entire structure.

‘Starting Over’ is a Prog-Pop composition that is like a flower opening up to reveal its true glory. Sung in the styles of It’s a Beautiful Day’s ‘White Bird’, you can hear the reverbing Leslie guitars and Mellotron’s soaring through blue skies into the atmospheric structures of Montana at its finest. ‘There You Are’ is Leslie’s nod to both Journey’s Escape and Frontiers. She’s rocking it out with an ‘80s arena rocker with some heavy pummeling midsections while the riffs carry some reminiscent between the Scorpions and Rainbow’s Down To Earth-era,

‘Down the Road’ is at first singing at an echoing chamber of a church as Leslie is giving a sermon inside during Sunday services. As the hymns are vocalizing in the background, it kicks in with a Country-Rocking drive down the highway in the Mojave Desert with a spiritual healing. Crossed between The Eagles and The Byrds Sweetheart at the Rodeo, she had been listening to some of the great albums from the golden-era of the Asylum label.

‘Wolf Cried Boy’ is a mournful composition. Beautiful arrangements on the person that you loved is a womanizer, you feel that you’ve been stabbed in the back and being used as a pawn to get married as ‘Your Wind’ is a spiritual journey. With its steel guitars and organ work, you can imagine yourself going up in the attic and finding the good memories of childhood of reading you’re scrapbook of old photos you haven’t seen for many, many years.

‘The Key’ which closes the EP, is having us drive into a cliffhanger, not knowing where the story will leave us before the second and final part of the story. With it’s waltz that is crossed between a Beatle-esque atmosphere, the future becomes questionable of a romantic composition.

Ascend is Leslie’s journey from childhood to adulthood. It proves that she’s more than just both an artist on American Idol and a Prog goddess, but bringing us a road-driven EP that is needed to play when you start the next chapter in your life. Let’s see what the second part of the EP will have in store for us this Fall.