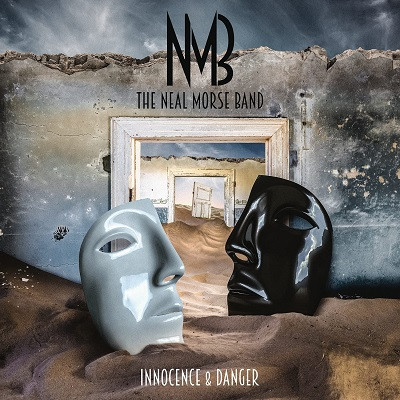 When you think of the alphabetic abbreviations in band names you think of; ELP, PFM, ELO, AC/DC, ABBA, BOC, and CCR. For a band like The Neal Morse Band, they’re joining the club as NMB. When I first heard about that, I thought it was very interesting idea for the band to carry on that idea. But it works well. Now understand, I’m not the biggest Neal Morse fan, but I always come to see and hear what the NMB will think of next.

Their follow-up to their 2019 release of The Grand Adventure entitled Innocence & Danger, which is released on the InsideOut label, showcases a step forward to take a big break from their conceptual storylines. Their fourth studio release is a return to writing individual compositions inspired by their own roots. The first CD from the album are shorter songs while the second CD is a gigantic door opening up for epic challenges that clock in between 19 and 31 minutes long.

So it’s time to delve into the NMB’s swimming pool and dive in to see what kind of mysteries that have in store for us. ‘Another Story to Tell’ carries that AOR vibration from the keyboard section reminiscing Hall & Oates’ ‘Private Eyes’ and Pilot’s ‘It’s Magic’. There is these lifting melodies from the backing vocals, watery synths, and Hackett-sque textures. The synth solo along with Gillette’s up-and-down guitar lines goes in for some hefty battles while ‘Bird on a Wire’ sets up into this epic Ben-Hur scenario thanks to Randy’s thunderous bass destruction. Arrangements are soaring throughout the world that gives listeners a chance to be free from the craziness that’s going on in the outside world.

While it is a nod the Duke-era from Genesis, Mike Portnoy’s Morse Code temptation gives both Gillette and Hubauer enough ammunition to bring out the heavy guns to fire on their instruments with some arpeggiated quest to meet these unexpected time changes. ‘Emergence’ sees this combination between the flamenco sun-rising virtue between Mason Williams and Ottmar Liebert. But on ‘Do It All Again’, which opens the album up in the first act, it becomes this counter clockwise scenery going from Genesis’ Wind & Wuthering to Rush’s Permanent Waves. It is also the dawn of a new day. The synthesizers are duelling like crazy as Neal details some uncovering evidence to move forward as Hubauer lends Neal a helping hand on the second verse going through time and space by setting things right.

The NMB’s nod to Yes’ take of Simon & Garfunkel’s ‘America’ with a bit of the ‘Firth of Fifth’ melody thrown in, you can tell Hubauer channels his approach to Tony Banks on the majestic cover of ‘Bridge over Troubled Water’. Mellowing jazz fusion with wah-wah textures and throwing in mellotronic vibrations with a grand symphonic finale. The 31-minute epic of ‘Beyond The Years’ is their imaginative movie brought to life. Featuring this Stravinsky-sque introduction, fanfare operatic tale with a piano morning section, there is a driven stop-and-go section honouring Devo’s ‘Jocko Homo’ as Portnoy and George do an intensive bass / drum improvisation to get some exercises between each other.

I love how there is this Gentle Giant-sque celtic foot stomping with a clapping rhythmic section before they delve into Tangerine Dream’s Force Majure-era and then honouring the late great Rick van der Linden of Trace and Bo Hansson thrown into the mix as it ends to a complete halt.

As I’ve mentioned earlier, while it gives the band a clean break from their conceptual story structures, Innocence & Danger is quite the trip to give the band members some ideas on what they want to do next. It may take a few listens, but it’s quite a bit of departure to understand that the NMB are more than just a conceptual rock band, but taking chances, and walking on tight ropes that can be very dangerous.