(((O))) Review: Silence is a Dangerous Sound – A Tribute to Fugazi 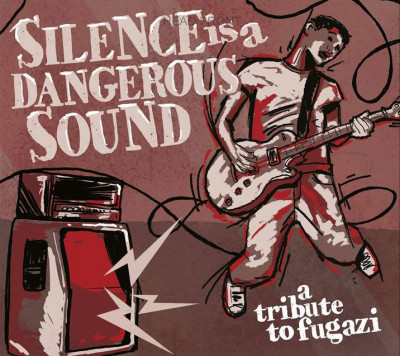 Silence is a Dangerous Sound by Various

Fugazi were my band. The arrived at the perfect time for me, in my late teens as I unconsciously searched for something with a little more substance than the Ramones. They were noisy, but not rowdy. They were clever without being alienating. They were po-faced, but about things that were important. In hindsight they were way ahead of their time, tackling subjects like corporate greed, body and gender politics and oppression via a sound that was sinewy and muscular but in the way that a gymnast is built, rather than a boxer. The legends surrounding their touring methods – sleeping on people’s floors to keep costs down, never charging more than five dollars for a gig, making them all-ages and chastising violent dancers – made them seem like decent people as well as good musicians.

There are still a surprising number of people who have never heard of Fugazi – they somehow became renowned worldwide without becoming famous. And all in the age before the internet, let alone social media.

And Fugazi fans are loyal. Many will tell you that their songs are not improvable. The urgent bark of Ian MacKaye, the sneer of Guy Picciotto, the interplay of the pair’s guitars – all locked in place by Brendan Canty and Joe Lally – all fit in place. It is difficult to imagine the start of ‘Waiting Room’ for instance, with anything other than Lally’s proto-reggae bass line followed by the pause, silence, tom-toms and chanting shout of “I am a patient boy… I wait, I wait, I wait.”

So it was with some trepidation that I pressed play on this compilation, collated to raise money for the Tribe Animal Sanctuary in Scotland. Would these 43 new-generation bands treat the songs with the requisite respect? Or would it be like a paint-by-numbers version of Picasso’s Guernica?

Thankfully almost all the songs work – particularly the ones that are transformed to something other than their original. Like Shai Hulud, who turn ‘Great Cop’ off In on the Killtaker into a breakdown-heavy metalcore song. Or ST Manville, who makes ‘Long Division’ from Steady Diet of Nothing into an acoustic slice of Americana. Or Snapped Ankles, whose take on ‘Give Me The Cure’ transforms it into something approaching a Mark E Smith creation. And USA Nails’ version of ‘Caustic Acrostic’ off End Hits makes you realise that it was always meant to be a filthy disco tune.

And the songs sung from a female perspective – ‘Reclamation’ and ‘Suggestion’, for instance – hit far harder when sung by a woman. The latter, by Jonah Matranga, is a very spooky synth version of Fugazi’s early song, while the former off Steady Diet of Nothing, by The Darling Fire, is an enormous, distortion-drenched thing of beauty.

Even the songs that stick closely to the original are worth a spin – if only to give you hope that the youth of today are also discovering the joy of a Fugazi song. Because let’s be frank, some of these band members were still singing nursery rhymes when Fugazi went into hiatus in 2003.

Highlights among the songs that stick close to MacKaye and Co’s vision include Pet Symmetry’s ‘Public Witness Program’ and Couch Slut’s version of ‘Full Disclosure’.

Meanwhile Batteries – the solo project of Bis’s Sci-Fi Steven – channels Picciotto so hard it is like he is in the room during ‘Target’. And Teenage Halloween give ‘Provisional’ the shimmering, jangly guitar line the due prominence that we always knew it deserved.

As you go through all the songs, one thing stands out: that they were very well written, way back at the turn of the century. Fugazi fans always knew that the songs were loud, occasionally catchy and sometimes challenging, but it is through this lens of people paying tribute that you realise that they are well constructed enough to be messed with and pulled apart and yet still deliver an impact.

And one more thing happened after a few listens: I realised that I hadn’t listened to Repeater in ages.