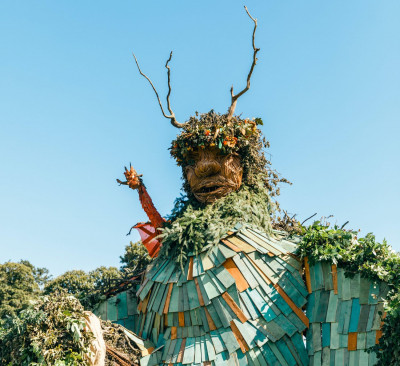 With just weeks to go, organisers of Wales’ beloved Green Man festival sent out an email with love and thanks to supporters, crew members, artists, and audiences. It also tentatively hinted at intentions to go ahead with the event while simultaneously voicing concern regarding the Covid pandemic, the ever-changing situation, and lack of clarification on a government-backed insurance policy. It felt like a long shot.

Then came the green light. All systems go. Full steam ahead. After such a long period of excruciating pain and darkness, a small, but extremely bright light shone, beckoning to the beautiful Black Mountains. The excitement and elation were palpable.

Despite a few last-minute pull-outs and an obvious lack of international bands, the line-up for Green Man 2021 was as impressive as ever, boasting an eclectic collection of performers, bands, artists, and comedians. This rich mix of talent was immediately apparent, as early arrivals were treated to two very different openers: the mesmeric, folk-soaked Shovel Dance Collective at the Walled Garden stage, and the post-punk duo Wet Leg at Far Out stage. “I’m a chaise longue, I’m a chaise longue, I’m a chaise longue, all day long, I’m a chaise longue.” The latter’s revoltingly catchy ear worm subsequently became a hummed hook for the entire weekend. Thanks for that, Wet Leg. 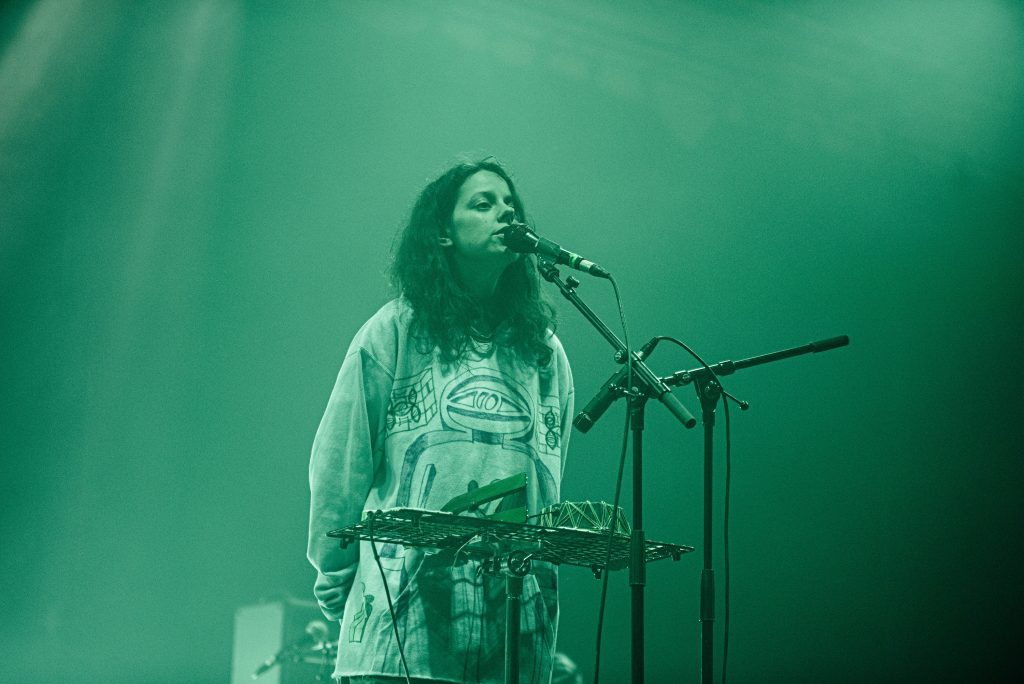 Tirzah on the Far Out stage. Photo by Eric Aydin-Barberini.

Later that evening, the sizzling nine-piece afro-jazz band Nubiyan Twist were led by guitarist Tom Excell through an assortment of magnificent grooves and extended jams. A special moment, which was followed by a late step-in performance by Tirzah. Although her vocal was lost in a sea of loud synths (and she almost disappeared a few times due to an overzealous smoke machine), her presence and adventurous sound were enough to keep many of the early contingent bopping happily.

Friday thankfully started with the soothing sounds of Fenne Lily. Playing tracks from her latest release BREACH as well as a few oldies from the wonderful On Hold, the Bristol-based music magician seemed right at home in the Welsh hills. Indeed, it’s not the first time she has played Green Man – we discovered her back in 2018 on the very same Walled Garden stage. Over the past few years, Fenne has refined her sound and become more adventurous, nailing the slower, more tender tracks like ‘Elliot’ that seem to be well within her comfort zone, but also adding speedier numbers like ‘Alapathy’ and ‘Solipsism’. It’s all pretty joyous to watch.

Another returning favourite of ours is Boy Azooga. The four-piece took to the Mountain stage and were joined by a small horns-section, adding an extra slice of pizzazz to their performance. Front man Davey Newington led the band through a set-list mostly made up of their fantastic debut album 1, 2, Kung Fu! There were also a few new numbers thrown in, which Newington reveals will feature on the second full-length, soon to be released. Keep your eyes and ears peeled!

Dressed in matching sports tops with “Fly Immigrants” written on the front, Sarathy Korwar and his band delivered a gripping performance decorated with lengthy jams and improvisation. Sitting behind the drums, he carefully directed the energy on stage, giving each musician space to perform and leaving room for the cutting spoken word of Zia Ahmed that was often delivered with venom. There is substance and meaning here, as well as brilliantly crafted pieces of music that ebb and flow before exploding. 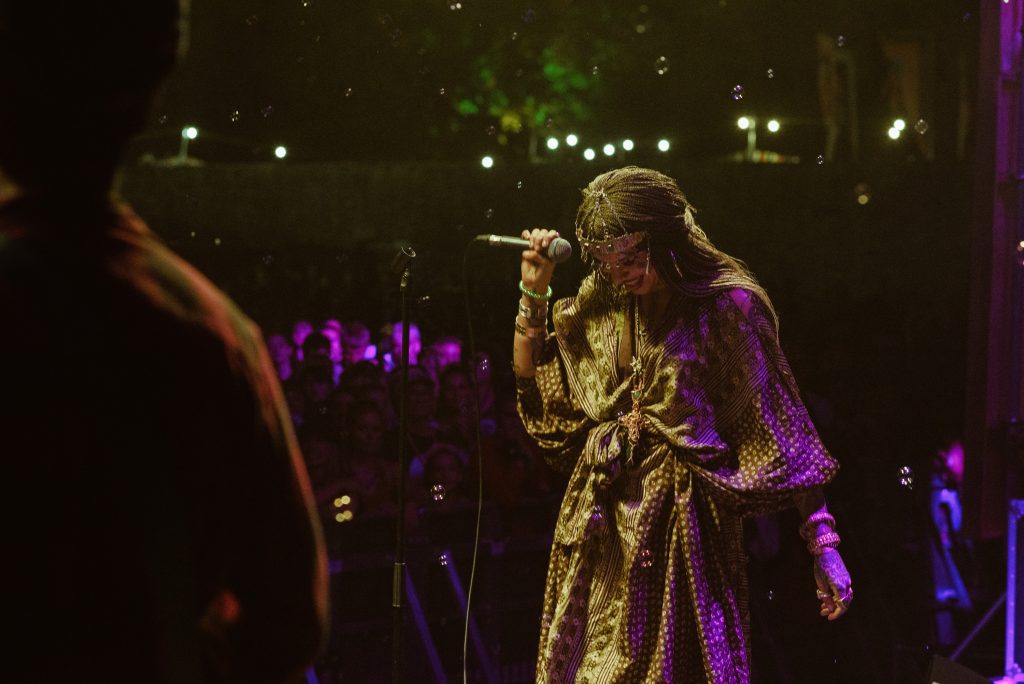 Creating a very different vibe – one that is extremely ‘vibey’– Greentea Peng took to the Walled Garden and produced one of the most engaging performances of the weekend. Opening with ‘Make Noise’, the first track off her debut album Man Made, she had the audience in the palm of her hand, dancing and swaying in a loved-up cocoon of goodness. “This is for your heart and not your mind, no man-made constructs, no divide.” Her soulful, rich voice delivered messages of love and togetherness – messages that feel extremely poignant.

Friday night headliners Caribou saw the dancing go up a gear. It’s easy to forget how many anthems Daniel Snaith has produced. With two drum kits placed centre stage facing inwards, he and his band kept rifling through banger after banger. ‘Sun’, ‘Home’ and ‘Never Come Back’ were among the closing songs, but ‘Can’t Do Without You’ rounded the night off.

An absolute treat lay in wait on Saturday, with Catrin Finch & Seckou Keita cooking up a delectable peppering of sounds and beautifully ornamented pieces. Maestros of the harp and the kora, Finch and Keita hail from Wales and Senegal respectively. Finch will often use the harp to deliver a bass part and chords, allowing Keita to wander off on meandering solos. They weave and construct a captivating sound, often balmy and calming, with long sections that seem to drift but always return to a point. It’s also no easy feat keeping a large audience entertained while sitting down beside two stringed instruments, but they somehow make it happen. 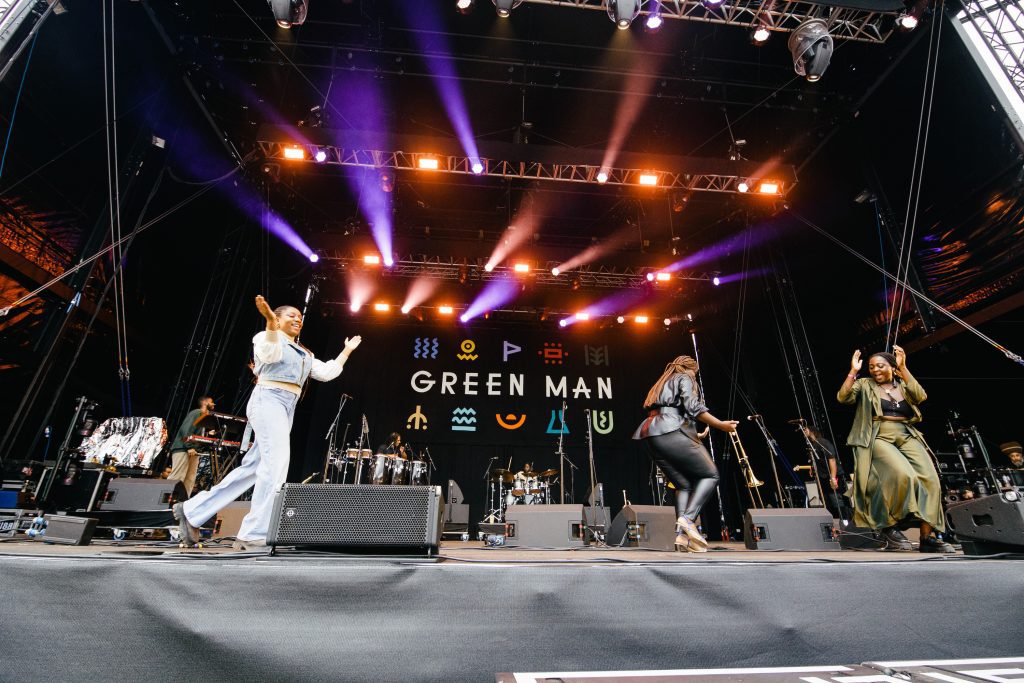 Kokoroko on the Mountain stage. Photo by Nici Eberl.

Having witnessed them play a mind-blowing set at the Camden Roundhouse in 2019, Kokoroko were a definite must-see at Green Man 2021. The eight-piece led by Sheila Maurice-Grey creates a fusion of Afrobeat and Jazz that is at once astonishing and infectious. Rounds of solos give each musician a chance to delve into the unknown, pushing boundaries and breaking rules before they re-join the group in a flurry of synchronised, rhythmic stabs and wonderous harmony. It’s like watching a firework show, with huge explosions crashing about one-by-one before they all join together in the grand finale to create a glorious whole. You never want it to stop, but it always does too soon.

Speaking of not wanting things to stop, Laura Marling’s secret set at the merch tent turned out to be not-so-secret. Eagerly propped on tip-toes at the back, her voice was barely audible above the chatter of those enjoying a pint of Growler in the Courtyard. She played just three songs, including the shatteringly gorgeous ‘Held Down’ from her 2020 album Song For Our Daughter, and then wizzed off to prepare for her next set.

Lump was worth the wait. With Tunng’s Mike Lindsay alongside her, Marling demonstrated how her musical genius stems beyond the borders of her solo work. The two have evidently polished their craft through their separate careers, and watching their worlds collide is a joy. ‘Animal’ and ‘Phantom Limb’ were among the standouts, the latter ending the set and making it difficult to see what could follow without sounding amateurish. 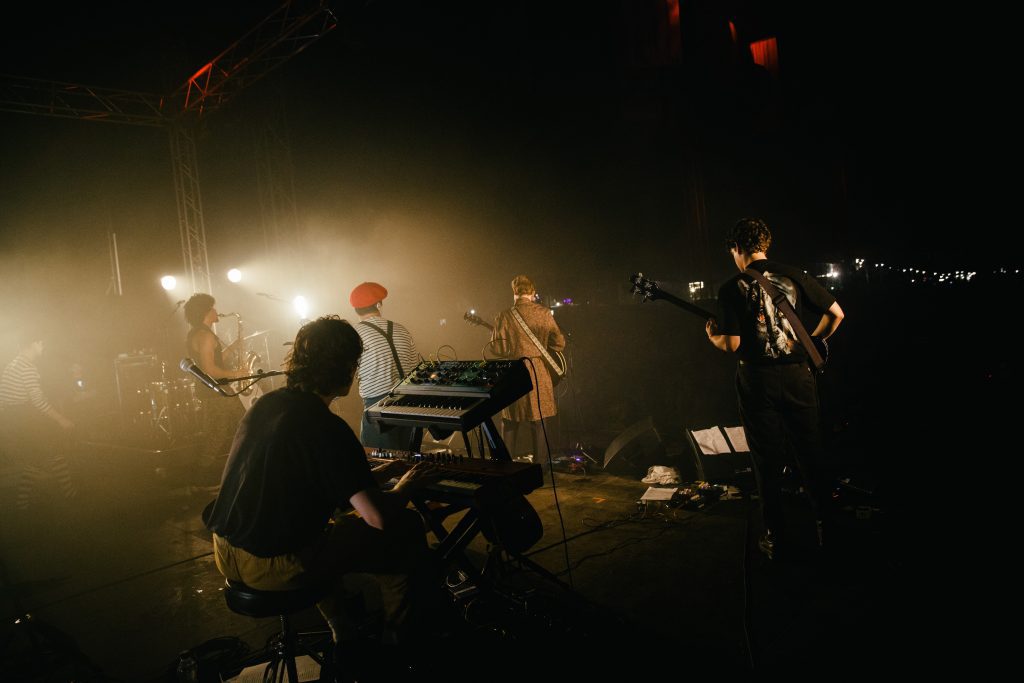 Black Midi on Far Out stage. Photo by Nici Eberl.

But fear not, up steps Black Midi. Furious and bizarre, angry and weird, and altogether nothing short of amazing – the London band have been described as avant-garde noise-rock, which isn’t a million miles off, but fails to acknowledge the swathes of post-punk, jazz, indie, and sometimes even disco-esque sounds that characterise their music. Guitarist and vocalist Geordie Greep takes centre stage and shuffles about in slippers and a silk robe, while sweat flies off drummer Morgan Simpson as he thunderously cracks through crazy complex patterns and speed-defying fills. There is no other point during the entire festival in which the crowd has more energy than during ‘John L’. A simply spectacular performance and, for all its weirdness, one that seemingly has so far left the biggest smile on people’s faces.

Showing just how eclectic the line-up is, Mogwai take to the main stage next, bagging the headline slot for Saturday. The Scottish post-rock stalwarts have consistently produced stunning music for 25 years, but it wasn’t until the latest album As The Love Continues that they started to make inroads with fans outside of the post-rock niche – it climbed to number one in the UK charts. What the heck does that really mean? Who knows, and despite some of the members looking morose on stage, Mogwai’s enormous sound and perfect execution of each song won them many new fans in the crowd. Instrumental music is finally becoming cool… who’d have thought?

Teddy Hunter kicked off Sunday on the Mountain stage after having won the Green Man Rising 2021 competition, and rightly so. Flanked by other Cardiff musicians, including Sam Barnes of Boy Azooga and Rhodri Brooks (both of whom also have solo projects), Hunter produces an ethereal soundscape assembled through twinkly keys and reverb-drenched guitars. It’s the kind of music that might accompany a person as they walk along the moon. On her Instagram page, Hunter fondly recalls past years at Green Man as a punter and barista at Table Top Coffee, but it’s on the main stage that she is most at home. We look forward to hearing more releases from her in the near future. 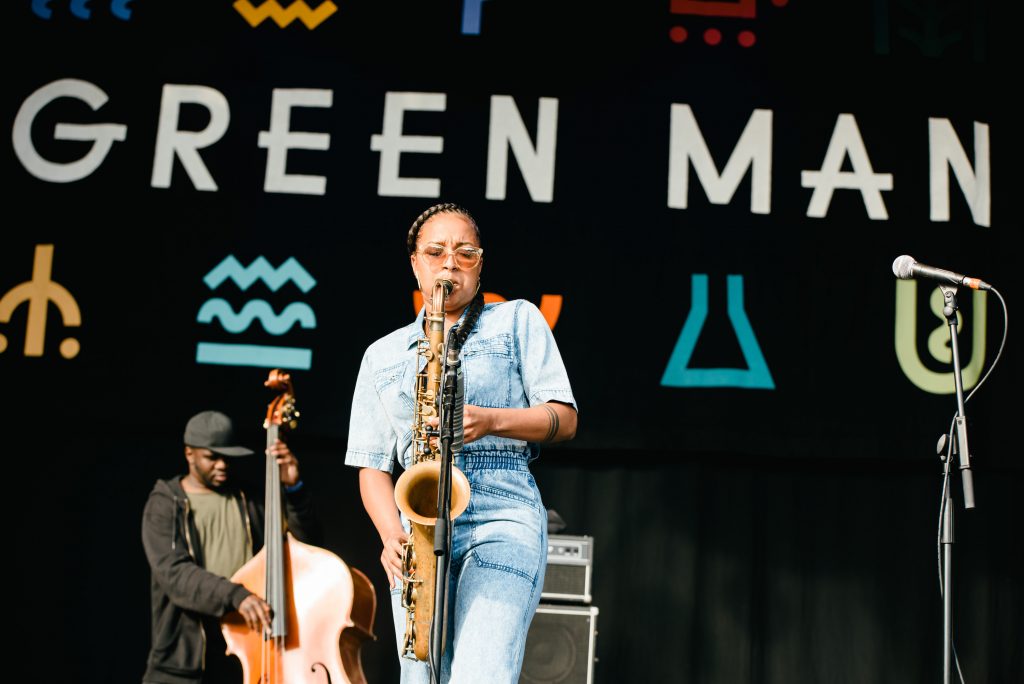 Nubya Garcia on the Mountain stage. Photo by Eric Aydin-Barberini.

Stepping up the energy on the main stage a little later was Nubya Garcia. As a bandleader and saxophonist, her presence at the centre of the stage is colossal, demanding all the attention of the early afternoon crowd that have been quietly basking in the sun. Her band never drop a beat, and the insatiable grooves of ‘The Message Continues’ and ‘Source‘ soon have people dancing.

A very different energy is created by The Staves. Playing songs off their magnificent new album “Good Woman”, the Staveley-Taylor sisters and their band create a sound that is immediately recognisable and polished to perfection. The title track from the album and “Devotion” are standouts, but there is something missing. Usually a trio, we are surprised to see only two of the sisters on stage, although later learn that Emily had been taking some time at home with her new daughter. It is still a breath-taking performance, but the magic generated by the three women as one immense unit is perhaps slightly diminished. 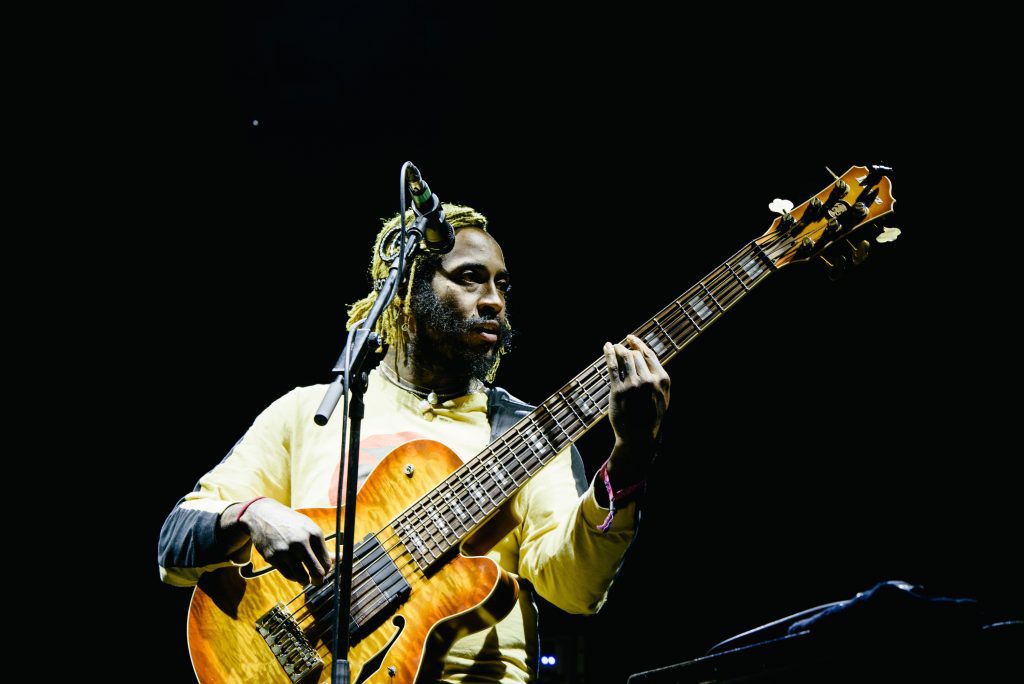 Thundercat on the Mountain stage. Photo by Eric Aydin-Barberini.

To top off an incredible weekend, it’s not the Sunday night headliner Fontaines D.C. that we turn to, but instead we set our sights on Thundercat. He doesn’t disappoint. Sauntering on stage to rapturous applause, Stephen Lee Bruner is dressed in a full yellow tracksuit, his dreadlocks also dyed yellow and adorned with sparkling Gucci pins. The drippy get-up matches perfectly with the performance. He plucks rich jazzy chords on his six-string bass while delivering wonderful funky falsetto vocal lines, and then dives into furious solos that seemingly feature more notes than is physically possible to play on a bass. It is both jaw-dropping and extravagant, a sensory overload. ‘Friend Zone’ and ‘Them Changes’ are among the many highlights, with the crowd screaming back “Nobody move, there’s blood on the floor, and I can’t find my heart”. We are left with spine-shivering tingles and an unfathomable sense of awe.

If there was a sliver of a silver lining in the shit-infused maelstrom that has been the past two years, it was that nearly every single band or artist had new material that no crowd had ever witnessed live before. Many also informed the audience that it was their first gig since before the pandemic, showing a giddy eagerness as well as a certain vulnerability in feeling out of practice. Yet there was barely a note wrong, a beat missed, or a line butchered throughout the entire festival. Instead, every performance was delivered with intense passion and finished with wide grins and confessions of love for live audiences. Everybody needed this weekend, full of music and laughter, good food and good company. It was much-needed therapy for the soul.