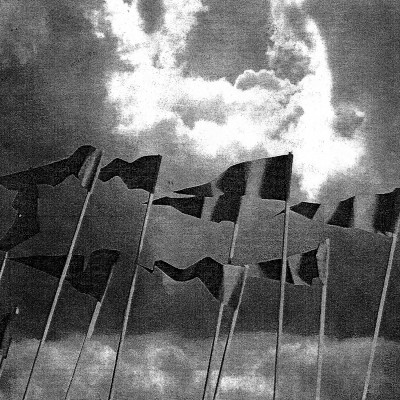 Iskandr present in Vergezicht a vast and ambitious record that nevertheless remains piercingly vivid. I keep listening to get a sense of the separate songs and realising I’ve drifted from one massive plateau of a song to another already, despite the hefty length of the tracks (six pieces, only two under 10 mins).

Of course there are differences, like the seesawing melodicism that’s continually busying itself around monotone growls in ‘Bloeddraad’ contrasting with the more impassive build of the opener ‘Gezag.’ And there’s choirish sounds, bells, horns, acoustic picking and all kinds dropped in, but despite the expansive hour-plus length, everything revolves around a particular kind of intense, monochrome but textured repetition, like a set of giant abstract charcoal drawings. (OK, I admit here my imaginary hearing world is totally influenced by the album cover for their earlier record Euprosopon, gothic arches that remind me of seeing an art exhibition of similar images in a gallery in Helsinki, and since I was the only person there, asking if they could turn the lights off so I could look at the pictures in the gloomier surroundings they demanded- more light doesn’t always mean more seeing…).

But there’s something about the chalky tangibility of air in empty churches or the faint audibility of incense residue in these tracks, whether the hushed singing that opens ‘Verbod’ or the warmly fizzing tones that shape the riffs throughout. ‘Gewesten der Tijd’ takes some influence from post-rock to my ears- but in a way the other way around from some of the post-black-metal that’s been going on for years. Here its not the cheap trick of an emotive sweeping long crescendo, but instead something about the grain of the harmonic distortion that’s put into the service of a charcoal-grey aesthetic. Its structure echoes the opening track, from acoustic twinkling, an imperceptibly slow gathering of feedback edges, and then a formal announcement of distorted guitar drops: in the first track, a distant trumpet, here a bell tolling for the arrival of a funereal clanging riff. Some of the vocals hint towards the declamatory style of legendary Dutch black metal originals Urfaust, and, as the longest track on the album, there’s even time for a modestly squealing solo even breaks out, allowable even in the sterner forms of 70s European psych that are an influence here.

Within these extravagant but taut pieces there’s a sense of harmonic nostalgia or something, a patient unfolding of hymns where hints of lighter, airy melodies break through, like stained glass glints stabbing through the heavy black drapes of murky droning riff cycles.