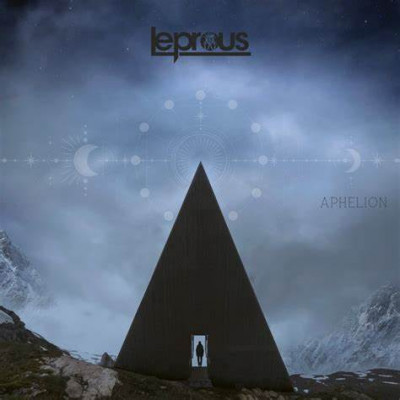 When an album titled Aphelion appears, it can easily be accompanied by a weary sigh. Meaning the point at which an object in orbit is furthest from the sun, its an interesting word, and a decent metaphor for the theme of depression and alienation that runs throughout the record. Yet, it is not a word in everyday parlance, the kind of word used by those desperate to appear more intelligent than they are. Certainly, as an album title if gives off more than a whiff of pretention.

Which, in the case of Leprous might not be far from the truth. The Norwegian progressive metallers have always been mysterious, enigmatic, even a little bit frustrating at times, with a tendency to head off in directions lesser bands would not even consider. Having long since left behind their early experiments with black metal (the guttural growls of that time have been almost entirely left behind, appearing here only in closer ‘Nighttime Disguise’, and even then, only briefly), the band have found a sound that works for them, an experimental yet emotional approach. As such, do not expect too much deviation from the formula – this is another collection of slick, complex compositions, that brush with anthemity before soon becoming lost in whatever rabbit hole the band decide. Yet, Aphelion is still the band’s best collection of songs since 2013’s Coal.

As ever, Leprous’ greatest strength is in bandleader Einar Solberg’s soaring, operatic vocals, and he is in full form here, veering from sullen and melancholic to full blown histrionics – often in the space of one song. Yet, this is a full band effort, and the presence of a cello and violin, carried over from 2019’s Pitfalls has added another dimension to the band’s sound. Indeed, opener ‘Running Low’ seems to have all the elements one could want from a Leprous track – beginning with a twanging menace, it’s a slow burning build up to a euphoric exultation of a chorus. Elsewhere, ‘Silhouette’ is a short and sweet blast of jittery electronics, ‘Have You Ever?” a reflective, robotic, reverb-heavy riot and ‘On Hold’ a slow burning epic. If it all seems a little morose and meaningful then it is good to see the band can still let lose, as they do on ‘The Silent Revelation’, by far the most upbeat track on this album caked in its creator’s depression. On the other side of the scale is ‘Castaway Angels’ – a superb little ballad, and by far the album’s high point.

Perhaps then Aphelion is the perfect title for this collection of songs. Sure, it is not a moniker that will attract the interest of casual fans, but perhaps that is the way Leprous like it – they have always been a band that have demanded a certain degree of involvement from the listener, a band that reward repeated listens with the depth of their compositions. Aphelion is another fine string in the band’s bow, a majestic collection of songs and one that could easily come to be seen as a high point by fans in the not-too-distant future.