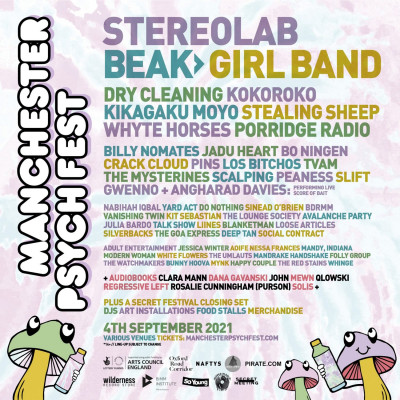 The Ritz’s famed sprung dancefloor is doing its bouncy thing beneath a leaping pit of bodies and the air is pulsing and expanding with energy and excitement. Up on stage, Girl Band are tearing the roof off, firing out great chunks of sound that explode against the walls, shaking the bones of the crowd, shocking deep muscle memory awake “Oh! YES!! This! I remember this!” Their brisk, wonky, noise sounds massive in here, overwhelming in a way that I’m surprised I didn’t weep for joy. It’s thrilling and challenging but mostly a welcoming embrace. As returns to live music go, you really couldn’t hope for better.

The video backdrop of vivid geometric patterns is periodically interrupted by the legend ‘THIS IS NOT PSYCH’ shooting towards us. What’s in a name? Girl Band, you might know, are not actually a girl band. Similarly, the line up for this year’s Manchester Psych Fest is notably light on acts considered to be unabashedly ‘psych’. Whatever that slippery little badge might denote. In rude health a few years back, British Psych seems in a bit of a lull just now. Not dead, as some suggest, but struggling to get up off the couch. Maybe it’s fighting long Covid.

The festival bill leans harder on the currently more popular mode of post punk. Heavily doused with noise rock this is roughly what Girl Band play but they stand apart from the crowd with music that is uniquely their own. Their songs’ intuitive paths making their odd shapes and abrasive textures feel both unpredictable and entirely natural. The fierce noises guitarist Alan Duggan calls forth from his machines are a quest for the new, Dara Kiely’s looping chants a kind of hallucinatory poetry of the ordinary. Their monster set closing version of Blawan‘s ‘Why They Hide Their Bodies Under My Garage?’ conjures a steadily intensifying vortex. Wild and celebratory it’s a transcendent obliteration of the every day. If that ain’t psychedelia, you can keep it.

A combination of cancellations and general anxiety have led to me re-joining live music at the rather full-on start point of a one-day festival but honestly, it didn’t feel that weird. Manchester Psych Fest is spread across a series of venues dotted around Oxford Rd. and a closer reading of the line-up reveals the old festival curse of the clash; you won’t be seeing 50 bands today, more like five – assuming you’re organised and get into the venue and/or are patient enough for the queues. Minor grumbles aside the organisation is pretty good and responds quickly to fast changing line-up adjustments. The day has a few false starts.

Opening band Kokoroko have to drop out and local lads The Goa Express step in to play a second set. We catch the very tail end of it and, well, let’s just say they are not doing themselves any favours with that name. If you’re picturing tablas and embarrassing gap year trousers you’d be dead wrong. They play the kind of vaguely sixties indie rock Creation might have put out back in the 80s and are altogether better for it. Porridge Radio are not as wet and unappealing as their name either but the live experience fails to shift my ambivalence about them. They’ve just arrived and take a while to settle. It’s OK, it’s got potential, but it doesn’t really do much for me.

Beak> take the stage in low-key style bringing an atmospheric mix of kraut and prog that’s less wildly psychedelic than it is a series of subtly shifting tones. Their onstage joking around is entertaining if a little at odds with their music. While it somewhat reinforces their image as three blokes dicking about on the weekend it does have the advantage of undercutting the sixth form earnestness they lean towards. Trust me, there are a few in the crowd taking it a bit too seriously but their muso chin stroking isn’t reflected by the people onstage, cheerily taking the piss out of each other and us. There’s worse reasons to be in a band than having a laugh with your mates, after all. Still, as the set draws on they talk less and concentrate on their pleasingly amorphous grooves. Even live there’s still something oddly intangible about them, as if they’re drifting in and out of focus. Endearing more than compelling they bring a kind of hazy pastoral mood to bustling central Manchester.

Laetitia Sadier is smiling and all is well. Stereolab are enjoying themselves. Across the stage Tim Gane is doing that eyes closed, head-shaking thing he does, like an avant-pop animatronic. If Virtual Abba are going to conquer the future can we at least get some vintage arcade machines retooled so a puppet Stereolab dances mechanically to ‘Jenny Ondioline’ for 50p? That thing would take all my change. Although, right now, we have the real thing. A couple of years back when they reconvened to tour with a bunch of reissues and a container load of merch I rolled my mental dice on band reformations and it came up ‘no’. Subsequent reports from friends in several places suggested I had made an error so I’m happy to get a chance to correct that. They’re in fine form tonight playing a condensed best-of type set kicking off with ‘Brakhage’ and the Marxist pop of ‘Ping Pong’, taking in the steady groove of ‘Metronomic Underground’ and hits in a better world ‘Miss Modular’ and ‘French Disko’. Even a little guitar pedal glitch cannot dim the rushing, shimmering, wonder of ‘Super-Electric’ still, perhaps, their greatest moment. Dispensing with the encore charade they close with one that might match it: ‘Lo Boob Oscillator’ is a single serving guide to everything great about the band. Opening as a bright francophone pop number about the moon, all sighing backing vocals and retro organ pulse, it shifts gear midway into a kosmiche drone beast, it’s perfect. Their set is an absolute joy.

From swooning at the apparent freedom of the moon we bump on down to the wearying reality of earth. One of the venues had to close earlier in the week with the bands due to play moved over into a couple of others. Noise-rock duo John are up next but in order to satisfy some licensing requirement or other the place has first to be emptied. Uninspired by the idea of queuing to get back into where we just left, we cross the road to close the night in Gorilla.

I’ve not really paid Stealing Sheep any attention before but I like the way they mix up pure pop instincts with more abstract approaches; I like the cool AV stuff they’ve got happening, and I like their inflatable hazmat bunny suit outfits. I like everything about them it appears but the music, which is fine enough while it’s happening but lacks anything memorable to make me seek it out again. It’s getting late.

The last band are TV Priest, who are not much to look at. They sound like the middle of a Venn diagram of The Fall, Idles, and Girl Band but with hopefully just enough individual weirdness to wriggle free of the pack. A chunk of that is down to Charlie Drinkwater’s words, unfortunately largely obscured tonight by the roar of the band as he paces the stage. Their music narrows too, losing some of the colour and shade of this year’s Uppers album for a bludgeoning post punk assault on stage. It feels a bit route one, all the time, and the crowd thins. Stepping in late for the injured Scalping perhaps they aren’t quite match fit – their short career so far, marked by lockdowns, leaving them with an accomplished debut album but only having played a handful of gigs. One to watch.

We are released into the warm dark night. Earlier in the day The Orielles had been announced as a surprise closing act, only to be cancelled a couple of hours later. So it is that across town The Goa Express step up to play their third set of the day, hopefully ruined with drink and having the best night of their lives. Live music – have you forgotten how good it tastes?