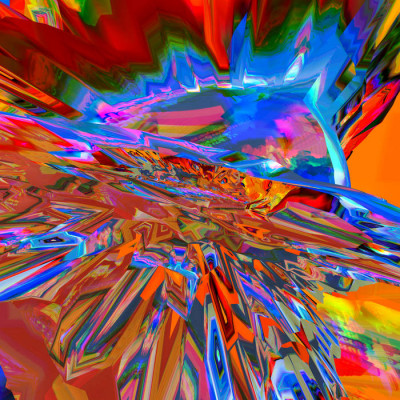 As a long-standing champion of music that doesn’t quite sound like anything else, Reversels have stormed into the top rankings of my AOTY list. LeSabre is somewhere between electronic, pop, avant garde, synthwave, techno, industrial, goth, trap, trip-hop, funk and post-punk. This album is what happens when you give a platform to a unique voice; in this case queer artists with what is literally a cult background. It proves the exact point that myself and the website’s founders amongst others have been trying to make about diversity and inclusion, not only is it fair and logically moral but, it’s for the greater good of artistry as a whole, we can’t find the future of music if we keep looking in the same places and at the same people. The cis-het white male perspective has been milked dry and moving away from that homogeny is to the benefit of everyone at this point. This album is one of the most singular releases I’ve heard for a long time. Not only that, it’s absolutely fucking brilliant, the use of melody, production and the overall performance is absolutely enthralling.

From the first few pulsating seconds of ‘Gravitron’ I could tell the production on this album was gonna be excellent, the fact that it oozes into a kind of bizarre hybrid of Teeth of The Sea and Depeche Mode afterward is just the icing on the cake. The contrast between the deeper, more gothic vocals and the more melodic high pitch vocals with syrupy autotune backing is just sublime. The lyrics “tell me that you want me” and “lay your magic on me” uniting the two vocalists in a longing for acceptance and human connection all with beautiful melody and a foundation of epic guitar lines, huge sounding bass synths and electronic drums that sound like they shouldn’t work with anything but, absolutely slay it here. ‘Azael’ manages to cross into the album almost seamlessly from its astounding 9-minute predecessor with a new set of beautiful synth tones and heavenly vocal melodies. The basslines in this track and on the album as a whole, are fucking awesome. The lyrics sing about donning make-up and shattering gender constructs and norms;

“You put on your makeup, both a warrior and a queen

Mastering the magic that we’ve all been kept from seeing

Are you male or female, are you somewhere in between?

It’s effectively an awesome anthem about non-binary ideals of espousing traditional gender roles and instead pursuing your own comfort zones. The programmed beats are really cool in this track too. I won’t really have the time to talk about all thirteen tracks in full but, what I love about ‘Relentless’ is the huge bass and drums sound and the huge, bold vocals. The vocals on this album are absolutely killer. I like the guitar hooks too. ‘Absurdity’ has these really great rhythm breaks and synth top-line melodies, I think coming from a more proggy or maths background will really make you fall in love with that track.

‘Torch Song’ is a song I have absolutely fall in love with. The wet acoustic guitar, the vocals that croon in “I’ll be your toy, I got what you need. I’m just a boy, you’re just like me”. Are so fucking deep in tone and full of pathos and yet, they’re razor-wired and full of lust and pain and enmity. As the track goes on they became more and more sinister. I love it. I love when people fully tour their brains when they perform vocals. For me, this album has kind of plugged a hole that used to be filled by Mechanical Animals-era Marilyn Manson… I stopped listening to that guy’s music when it was brought to light that he and one of his bandmates were both fucking rapists. Well, if you like that, here’s an artist (or rather a duo: Pretty Boy Floyd and Story) who represents a marginalised and often abused community that is taking music in a totally new direction. The electronics and the vocals as this track progresses are just so amazing. I can’t even really explain how fully I love how passionate and emotional and cathartic the whole album feels. I fucking love it.

That epic stripped back song is then followed by “Pretty Boy Floyd’ which is an amazing dream pop track with what instantly one of my favourite hooks ever in one line “take the rich man’s money, you can give it to us Daddy”. Anything about wealth inequality and taxes or even outright robin hood robbing the rich is something I’m instantly gonna love because billionaires simply shouldn’t exist when there’s children starving in the wealthiest countries in the world. To add that kind of kinky subtext in as well is just perfect though. But, the track is not just good for the lyrics, the vocal harmony between the two singers and their multi-tracks and the heavy duty bass and the synth arpeggios that go with it, all play a huge role. It’s fucking awesome. I can’t really sell this album enough because it’s basically the best new thing I’ve heard in over a year. “SoftBoy Rabbithole” is another great dream pop kind of song on the album, I love the kind of auto tune vocal hooks on this one. I would really love to just have all the lyrics in front of me to refer to them cause often I can make out really cool stuff but, I’ve still not learned most of it.

‘Wonderland’ is a really interesting track because it’s quite stripped back but, it’s also extremely rich but, simultaneously opiate and full of mystique. ‘Cupcake’ starts kind of minimal but, then has excellent brass hooks and a rap section that kind of reminds me of Weird Al to be honest, it’s kind of cheesy but, it’s also really fucking cool as well? Kind of like Beastie Boys, it’s not supposed to be cool but, it just really is…’Boom Kitty’ takes things further into the trap zone, with deep, spooky vocals, big brass hooks and a lot of intensity.

‘Skin’ is another track I love on the album, it’s extremely raw and direct. The lyrics open “I don’t need your attention, I don’t need your affection, I don’t need no redemption, I have my skin”. I love the whole message of independence, self-sufficiently and self-acceptance. I like to think of it as a song about being “thick skinned”, essentially, reaching a point where you stop caring about all the people who spit venom at you because you’ve realised it doesn’t matter. There’s just something really engrossing about this track.

‘Dissolve: Resolve’ is another cool Reversels-style dream pop song on the album with hooks about unity and working together and I like to think it’s about dissolving who you were before you could decide who you want to become and ‘My My’ ends the album heavy and sparse. The focus on the pounding on the toms makes for some really nice mixing and the percussive use of synths adds to the groove of the song overall. The vocals are really interesting on the song too, lots of depth in the layering and effects, there’s a narcotic element to it all.

I think that LeSabre is probably my favourite album I’ve heard this year so far. It’s not exactly surprising when it’s essentially a queer, genre-surfing, electronic, left-field, goth pop, industrial synth-wave album which for me summarises very well what I want from 2021. The lyrics are great, the production is great, the performances are great. I had never heard Reversels before LeSabre and now, I love them.