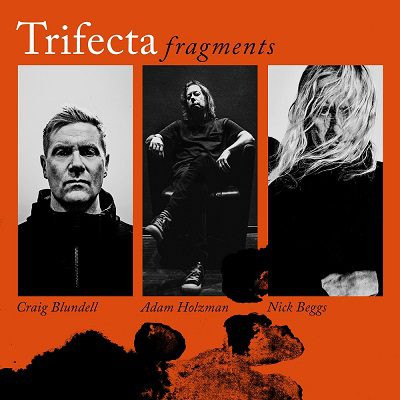 Three years ago something extraordinary had happened. I was at the House of Blues on 20th seeing Steven Wilson for the first time, promoting his fifth studio album To The Bone. It was a concert I will never forget. Seeing not just Steven, but Adam Holzman, Craig Blundell, Nick Beggs, and Alex Hutchings lending Wilson a helping hand as the rhythm section. He wasn’t only performing classics from Porcupine Tree, but also his solo career as well. And it brought the city of Houston to a standstill.

Now in 2021, Beggs, Blundell, and Holzman are leaning forward to a sound of “Fission!” After they finished the tour with Steven, the trio had enough track ready to record. Throughout various projects, they decided to call the project, Trifecta. Their new album released on the Kscope label entitled Fragments, is their love of the music.

You can tell that they’re having a ball with the music they were creating. Each of the recordings that was done at their home studios whilst mixing the album in the Big Apple. Listening to ‘The Mute Gospel’ is Trifecta’s answer to the melodies of Queen’s ‘All Dead, All Dead’ inside a church. You can hear raindropping effects, slap bass, church organ arrangements, and Holzman creating these wailing vibrations.

‘The Enigma of Mr. Fripp’ has these cat-and-mouse textures channeling the compositions between Larks’ Tongues in Aspic and Red. Alarming atmospheres for a full scale assault, the blaring sounds of the mellotron and intensive drum work sets up this tidal waving cliffhanger.

‘Sally Doo-Dally’ has electrical bebop grooves while Adam channels the inner vibes between Thelonious Monk, Herbie Hancock, and Randy Newman. You can imagine yourself walking down the aspects of bright, bright lights in the heart of the Broadway streets across 42nd street while ‘Proto Molecule’ features an intensive duel between Blundell and Beggs laying down the funk.

With a trip-hop drumming intro and the finale at the end, it has the sense of humor honoring Raymond Scott’s ‘Powerhouse’ that goes into a groove. ‘Clean Up on Aisle 5’ blasts us off into outer space. Mahavishnu territory for the trio dancing into the inner mounting flame with Genesis’ A Trick of the Tail structures on its climatic opening, ‘Dance on a Volcano’.

Adam goes up in the air as he takes his keyboards to unknown worlds between synths and the organ as Beggs and Blundell are part of Holzman’s orchestra. Not knowing where’s he’s going to stop next in this symphonic jazz rocker, ‘Pavlov’s Dogg Killed Schrodinger’s Cat’ is a noir mellowing composition.

Beggs sings about how science got it all wrong over the dog’s murder of a paradoxing cat. Mourning remembrance on where the dog finally had enough of the feline’s quantum mumbo-jumbo nonsense, ‘Nightmare in Shining Armor’ is a fast-speeding groove down Holzman’s highway as Nick channels Jaco’s improvisation.

When I was listening to the track ‘Lie 2 Me And Take My Money’ I thought at first Trifecta were Metal up our asses, but then Nick takes the Chapman stick with some blaring guitar work, fuzz tone electric keyboards, and hay-wiring effects. It becomes this cannon blast for the trio. They have a huge amount of ammunition with some mathematical Crimson effects that is waiting to erupt at any second.

Trifecta are something extraordinaire. Fragments isn’t just a Jazz album, but a no-holds barred Fission release! And while we’re still going through these tricky times, Trifecta has given us a chance to come inside their house and enjoy the party. I hope we get to hear more from Trifecta in the years to come in the roaring ‘20s.