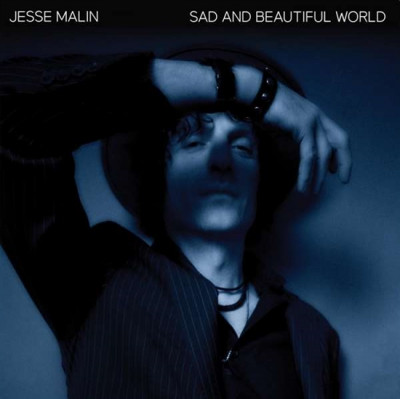 Singer-songwriter Jesse Malin’s last record, 2019’s Sunset Kids, was produced by Lucinda Williams and she also performed on it and now appears on a couple of tunes on his new one, Sad and Beautiful World. Why am I telling you this? Well, Lucinda Williams is the real deal and Americana royalty, so if she works with you then that’s like a kite mark of quality and a mighty fine stamp of approval. Now maybe he didn’t need it, eight albums into his solo career, but I guess it shows Jesse’s earned his stripes and is very much part of that community. He wasn’t always, you know. Jesse was a punk rocker, he came from the New York hardcore scene and then fronted the rather cool D Generation, a sort of glam punk outfit who released a couple of very solid albums in the 90’s.

Yes, Jesse is feeling and sounding pretty confident right now, as evidenced by this new double album with themes attached to each half – ‘Roots Rock’ and then ‘Radicals’, although it’s all rather loose and the songs are interchangeable to some degree. There are absolutely no duff songs here at all, but I definitely have my favourites.

The first set sounds like it was largely written at the piano and is fairly restrained and downbeat, but never down and out. The second set is a bit more fleet-footed, groovier and displays more of the artists’ New York roots. What I have found most surprising about this album is that several of my favourite tunes remind me of Billy Joel, an artist I’m not a fan of and have previously given little time to. Billy, is of course a fellow New Yorker and his pugnacious but poppy output in the 80’s seems to have had a strong influence on some of the more upbeat numbers here. ‘State of the Art’ off the first set is street tough, loquacious and smart, but driven by a desire to get you moving. And then there’s ‘A Little Death’ which is clearly a tribute to Blondie and struts to a classic disco beat.
‘Backstabbers’ takes the New York groove down grubbier streets. Despite an intro full of bright keys and perky percussion Jesse is clearly channelling Lou Reed on the verses and the whole thing rides along on a melody not dissimilar to ‘Get A Grip On Yourself’ by The Stranglers.

The ‘Roots Rock’ tracks can take longer to make an impression, but the first side throws up it’s share of decent moments. Where the songs are slightly hampered is by Jesse’s voice, as he has a sulky, mildly nasal voice that can give the songs a more miserable aspect than the lyrics really intend. His range is similar to Tom Petty, a big hero of his, and he scratches a particular itch here by covering ‘Crawling Back to You’ from Wildflowers. In truth he doesn’t do anything new with it, but it’s a decent stab. What is surprising is that the following track, Jesse’s own ‘’Tall Black Horses’ is a song that Petty would have killed for. A ballad of real pathos and heft with an anthemic chorus made for stadiums, it’s probably the tune here that really marks him out as a top-notch songwriter.

Several songs deal with loss; ‘Lost Forever’ seems to be about an absent parent and ‘Todd Youth’ is written from the perspective of his deceased D Generation band mate “I never say goodbye, it just ends” but there is little misery or self pity. Jesse is always looking to the bright side, to the future, to ‘Greener Pastures’ as he does on the opening track. In fact whilst a lot of the songs were written in lockdown, the pandemic is rarely directly referenced in the lyrics until the closing tune ‘Saint Christopher’. Over a jaunty, almost giddy backing Jesse sings “Hey man, what do you say, I’m all fucked up in the USA, Hey man, where do I go, it’s happening all over the world” against a piano run that sounds like it hasn’t a care in the world. It’s a great way to end the album, with a shrug of recognition of our troubles, but excitement at new adventures afoot. Here’s to that.