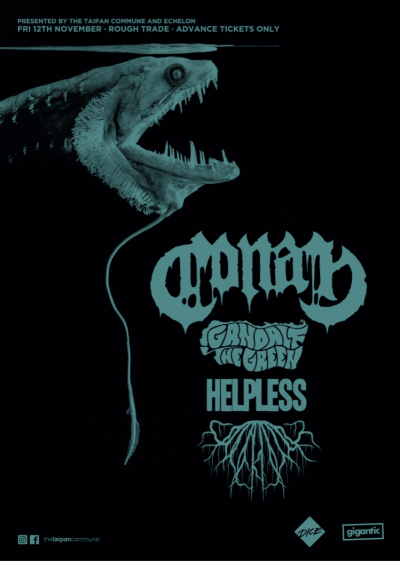 On a rainy Friday night in November, the long awaited Conan tour (rescheduled twice for obvious reasons), hit Nottinghams Rough Trade venue and as nights of sheer heaviness go, it was more than worth the wait since and the sold-out audience definitely agreed.

Nottinghams own Underdark were up first, and their vicious black metal and hazy shoegaze style atmospherics started the night off brilliantly with vocalist Abi’s formidable shriek over the bands brutal but beautiful music shaking the venue to its core. The music Underdark played from their debut album Our Bodies Burned Bright on Re-Entry was well received, especially the title track from the record, and they demonstrated exactly why they are one of the best new bands from the UK underground.

Helpless followed, and their hypnotising groove and frenetic grind gave a relentless edge to proceedings as they powered through material mainly new to the Nottingham crowd. Energetic from start to finish, Helpless impressed with a razor-sharp display of ferocity, and their technical take on grindcore with a hint of powerviolence was one that was a definite crowdpleaser.

Gandalf The Green were up next and the band play grooving stoner rock the way it should be played, massive riffs on top of massive riffs that sounded brilliant. A hazy introduction kicked things off well and then it was a journey through riff-land. A stirring rendition of ‘The One Ring’ from their King Of The Ashes EP was a set highlight but all the material they played went down brilliantly, especially the much faster new song they played; and as they ended with a grooving jam to finish, it set the scene nicely for tonight’s headlining band.

Conan came on and from the very first piece of mammoth noise that emitted from the speakers just destroyed and devastated all corners of the Rough Trade venue. Kicking off with ‘Krull’, Conan took no prisoners as vocalist/guitarist Jon Davis, bassist Chris Fielding and drummer Johnny King blasted through a whole host of brilliant doom metal songs. Material from the band’s last album Existential Void Guardian like ‘Volt Thrower’ and the ‘Paincantation’ went down really well, as did older tracks like ‘Foehammer’ and ‘Hawk As Weapon’; and the whole set was delivered with energy and power with an abundance of volume delivered in spades. It felt amazing seeing the band live, doing what they do best, and even though it had been long awaited it was definitely worth the wait. As Conan finished their set with ‘Horns For Teeth’, it was clear that they had slain Nottingham tonight and their set was rapturously received as the closing notes rang out. It was so well received, they actually played an unplanned final song in ‘Battle In The Swamp’ that gave the crowd one last chance to enjoy the Conan experience. All went home happy, and the band showed exactly why they are masters of what they do.

One final thing that was great about tonight, apart from, obviously, the performances and the reception they got from the sold-out crowd, was that the four bands all played different styles of heavy music, but all went down extremely well. It shows the depth of extreme music in the UK, and long may this continue.