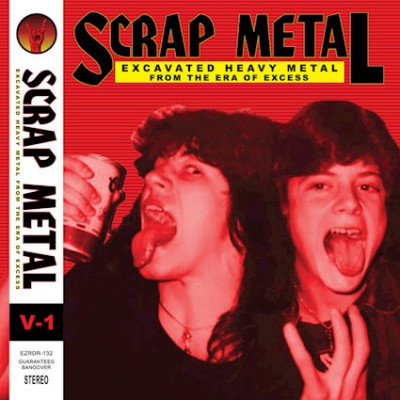 In the final episode of the 2006 docuseries of Heavy: The Story of Metal from VH1 Classic which covered the Thrash and the future of the Metal genre, the late, great Malcolm Dome described on how the kids were getting fed up with bands from the Hair Metal scene, wanted some real energetic vibes. “What was going on was a new generation of kids coming through who wanted serious, straight-forward, undiluted Metal!”

In the ‘80s Metal was supposed to be about the music instead of Girls, Girls, Girls and having all of these Roses in its thorn. “For me, it’s about the music than getting laid”, Anthrax’s Frank Bello said in the doc, “I’d rather have a great riff, and a great song, and feel good about it, than having my…” you get the general idea. That’s what Metal is supposed to be. Fast, hard, raw, brutal, and energetic.

Taking the inspirations between Punk and the New Wave of British Heavy Metal, Thrash had attitude. But so did the obscure sounds of what is known as Scrap Metal. RidingEasy and Permanent Records have teamed up for a new compilation for the first volume of the series by following in the footsteps of the Brown Acid stories.

Recorded between the late ‘70s and early ‘80s, most of the songs that the bands and artists self-released these songs with its raw powering attitude to seek and destroy what was happening during that time frame. The music itself is a pure motherfucking beast ready to attack!
Don Cappa’s ‘Steel City Metal’ is a tribute to Pittsburgh. The drums sound like a brutal construction sound, followed by brutal riffs and electric improvisations that sounds like a full scale attack with machine guns blazing while Resless’ ‘The Power’ is a combination from the Paul Di’Anno-era of Iron Maiden with Rob Halford’s high screaming vocals.

Double-edging swords of dueling guitars riding down the Marquee to knock their socks off, it is giving the Hair Metal scene with the biggest middle finger than you ever see as it reaches the top of Mount Rushmore. But, that is a real corker for a band that could’ve been bigger than both Maiden and Metallica.

Dead Silence’s ‘Can’t Stop’ is a motorcycling revving composition. The drums, guitar, and vocals are ascending towards an interstellar overdrive arrangement for a gang war that’s going on in the streets. But with an attitude as if Dee Snider and Scottish Metal band Holocaust wrote it as an anthem to prepare for one of the most bloodiest wars that’s will be talked about in the years to come.

Real Steel’s ‘Viking Queen’ sounds like something straight out of the Kill ‘Em All-era from Metallica. The vocals have this James Hetfield-like epic preparation to be in battle dressed up in your Viking uniform singing along to the majesty her queen with haywiring midsections and a raw sound of Black Sabbath’s first two album thrown in the blender.

The Pete Townshend-sque riffs in the style of ‘I Can’t Explain’ on Rapid Tears’ ‘Headbang’ has bits of a Punk attitude answer to banging your head as if The Clash and Diamond Head had teamed up to blast the doors open of the genres to make it cool all over again while the Maiden sound returns once more for Air Raid’s ’69 in a 55’.

I only wish this song could had been on Neal Kay’s playlists at his Heavy Metal Soundhouse and it would had audiences doing air guitar-like riffs and headbang like no other as we return back to Punk once more with a Glam attitude, the right way on Hades’ ‘Girls Will Be Girls’.

With its crescendo opening, it may be too Metal and Punk for various clubs back in the late ‘80s, but holy shit in a fucking handbag this band could had brought everything to a standstill as if they were Riki Rachtman’s house band at the Cathouse in the Sunset Strip in L.A. during that time frame.

Fast guitars, eruptive drums, and a powder keg waiting to erupt, Scrap Metal’s first volume is a great introduction to start the series with a bigger bang! This compilation is like searching for more unearth treasure that awaits us! RidingEasy and Permanent have struck a ginormous amount of fucking gold that is waiting to be unleashed!