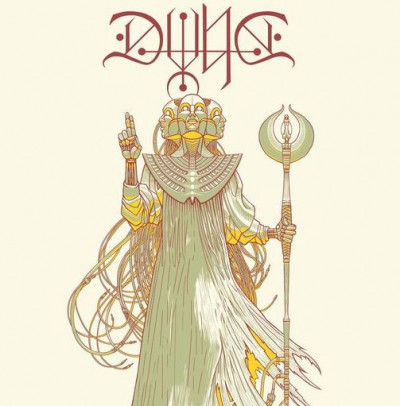 I remember DVNE from way back, when all this was fields, even before they were just Dune and they were called Scapegoat1. They were a bit rough, and only ever played a handful of gigs. But even then, they showed promise. Line-up changes, name changes and lots of gigs ensued. They kept on getting better. They were attracting attention.

And now, fresh from their ‘Best Metal Act’ triumph at the Scottish Alternative Music Awards, they’re back in Edinburgh, playing a rare home gig to showcase their recent new album, Etemen Ænka, currently causing ripples in many AOTY lists.

But first, Glasgow’s technical death metal (deathcore?) lads Godeater – fellow SAMA nominees – do a fine job of warming up the growing crowd, drawing them in from the bar at the back of the room, the traditional responsibility of the first support band.

‘Come forward!’ singer Josh Graham demands. And we do,

‘Make some fucking noise!’ And we do2.

Godeater rip through a ferocious set culled mostly from their All Flesh is Grass album and the entirety of their 2020 lockdown EP, You Are No Exception, apparently delighted to have a chance to play some of the newer material in front of an audience at last. They’re still angry, though. Many ‘rock’ shapes are thrown.  Many, many riffs are um… riffed. And there is some excellent gurning from big Ross Beagan on guitar. Great stuff.

Meanwhile, the smoke begins to thicken on the stage.

Locals King Witch are also more than happy to have a chance to play material from THEIR lockdown album, Body of Light, and give us a galloping set of their doom-tinged classic rock; a thunderous, turbo charged blend of Sabbath and Maiden, with the colossally voiced Laura Gilchrist a formidable presence up front.

Now, if I’m being absolutely honest, I have to say that this particular flavour of metal is not entirely to my taste3, but I can’t deny the quality of the product. They’re not the most showy of bands, but they’re rock solid and quite clearly know what they’re doing. Guitarist Jamie Gilchrist’s work is nimble and expressive, and you couldn’t budge the rhythm boys with dynamite.

They close with the epic, prog-doom monster ‘Full Moon King’, a proper crowd-pleaser, and they’re done, leaving the scurrying crew to clear the stage4 for DVNE in the ever thickening fog.

So, by the time DVNE arrive on stage it’s like a bloody pea-souper in here. I have to assume that this is deliberate, and it’s not that somebody has left the smoke machine switched on by accident. Maybe they’re getting in some practice for their tour with those notorious smog monkeys, Bossk, which kicks off tomorrow5.

Anyway, there they are. Victor Vicart and Dan Barter, twin guitars/vocals in one of the country’s most promising ‘new’ bands. There are others – Greg Armstrong on Bass, Evelyn May on keyboards, and Dudley Tait, a ghostly mantis-like figure on the drums – but they’re seldom visible6 and let the two frontmen hog the limelight. So to speak.

Like I said, up there somewhere, DVNE are here to play through their newest record, Etemen Ænka, and so they do, albeit rearranged somewhat. From the swirly synth intro and the gut-punch of  ‘Towers’ with its Cult of Luna-esque post-metal passages and galloping Iron Maideny bits to the thunderous set closer ‘Of Blade and Carapace’, DVNE are simply colossal. Tighter than the proverbial waterfowl’s cloaca. They blend so many genres – doom, prog, space-rock, black metal, etc – and turn them all into pure DVNE. They’re ferocious and they’re delicate and they’re brutal. It’s astonishing how much they have improved and developed over their career, particularly in the vocals department. It always seemed that Victor wasn’t a natural singer, maybe a little weak, but no longer. He mostly handles the clean bits, but his high-end growls complement Dan’s guttural bellowing perfectly now.

The two of them work together almost organically, as natural as breathing. Guitar duties are shared, as with the vocals: Dan providing most of the crunchy stuff and Victor handling the widdly bits with his trademark custom-built 9-stringers. That’s not to say that Dan can’t widdle, or Victor can’t crunch, they both most certainly can and do, but mostly they stick to what they do best.

The rest of the band? Greg’s an amazingly talented and creative bass player, Evelyn expertly fills in all of the gaps with her swooshing  sci-fi keys, headbanging like a maniac in the murk, and Dudley is an absolute machine on drums. Beyond that, I can’t really say much, because they were mostly invisible in the smoke. Yes, I know, I keep on bitching about the smoke – I just don’t like smoke! But I can’t deny that, combined with the dazzling backlighting, it creates a spectacular, almost alien, atmosphere on stage, entirely appropriate for DVNE’s sci-fi/fantasy concepts. So, yeah, I should just shut up about the smoke.

They come back for a brief7 encore, ‘Thirst’ from the Asheran album, I think, and they’re done. DVNE have been utterly spellbinding. Majestic. They have become something very special. Absolutely, ridiculously, immense. If there is any justice in the world of metal, they will soon be right at the top of the tree. Will they get there? Up to you lot, really.