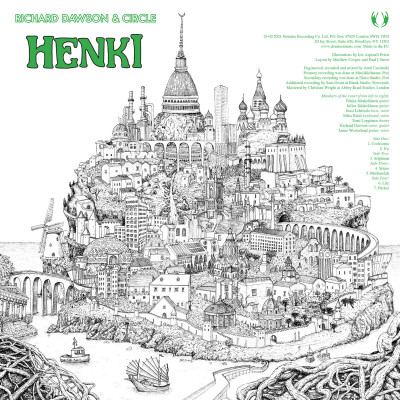 What sonic sorcery is this? Long has the three word charm ‘Folk-prog-epic’ proven most efficacious at repelling my interest. Yet it is undoubtedly a fitting descriptor for Henki, an album which only grows in my affections with each successive play. Typically genre defiant, Richard Dawson & Circle take up my musical red flags, using them to decorate their ship as they set sail for the mythical city pictured on the cover.

Much anticipated ever since it was announced, this collaboration between the beloved Geordie folkie and Finnish heavy metal weirdos always promised to be interesting but the results are truly amazing. Given that Circle are restless shapeshifters and Dawson has been making varied music in collaborative projects Bulbils and Henn Ogledd the direction they might take together seemed wide open. So when on first listen it drifted by making only the slightest impression on me, I think it was because what it most sounds like, is Richard Dawson fronting Circle. Which might seem obvious but was by no means guaranteed. What they’ve made is a surprisingly direct, rich and polished album that blends Dawson’s remarkable storytelling abilities with Circle’s quicksilver music to delirious effect.

While the things Circle do to challenge the shape and identity of their band should perhaps not surprise us anymore, allowing someone else’s songs to take centre stage is undeniably a bold and generous move. Although, for all that they’ve travelled to the four corners of rock and sailed the seven seas of genre, Circle have never really been a band who had songs. They have a singer, Mika Rättö, but he sings in a made up language and spends more time playing keyboards and throwing extraordinary shapes onstage than singing. Dawson seems to lead everything he does with his words and voice, fascinated by its possibilities. On his last couple of albums he’s expanded the instrumentation but, as great as they are, he has seemed a little uneasy with the idea of himself as bandleader. A problem neatly solved if you happen to be invited to join your favourite band in the world.

Henki feels like a natural progression from Peasant and 2020, knocking away some of Dawson’s more ragged edges, holding his wayward songs in Circle’s sturdy hands. Nominally a plant based concept album his lyrics sweep wildly through botany, antiquity, mythology and the supernatural. Opener ‘Cooksonia’ sticks to the plan with a soft journey through the life and work of botanist Isabel Cookson set to a swirling and increasingly pretty backing. Then about two minutes into ‘Ivy’ we go careening off around the planet crashing through familiar fragments of myth and legend and across time in preposterous but absolutely thrilling style. The lengthy ‘Silphium’ rocks serenely along before wandering out for five minutes of ambient space in the middle. Rättö’s piano, a melodic thread across the record, taking something like the lead here, flowing beautifully through the track and offering a steady counterpoint to Dawson’s “how we are lost” vocal.

If it’s no longer leading the songs alone Dawson’s voice sits more comfortably within Circle’s arrangements, even as he finds more wide ranging ways to use it. There’s some impressive metal wailing here and there, especially on the closing ‘Pitcher’. While the song structures are a long way from simple verse-chorus templates they provide a dependable framework within which the considerable talents of the assembled can all shine. Like a coming together of two great houses, Henki succeeds in being greater than the sum of its parts, a near mythic feat. Both literally and figuratively epic.