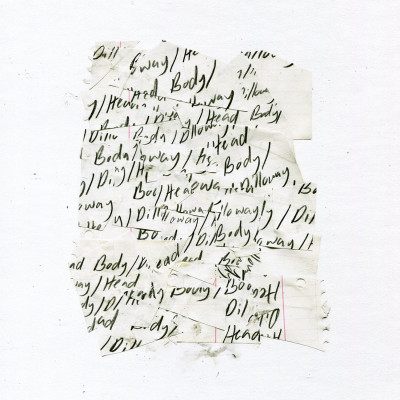 “For those who look to music for a vector of order, there is only one question: what are you afraid of?” Francois J. Bonnet – The Music To Come

Aaron Dilloway is on a roll. That’s not to say that he’s been off the boil but last year in particular his output was especially abundant. If he’d solely released the sensational split with Lucrecia Dalt, that would have been more than enough to sate eager ears. But he didn’t stop there. We were also treated to Hallucination Review, appearances on a whole host of compilations, and now this brain-blending collaboration with the formidable duo of Kim Gordon & Bill Nace.

If you’re not previously familiar with Body/Head (the nom de plume of Gordon & Nace), they’ve been inverting expectations in the worlds of free rock & noise for the best part of a decade. Through Gordon’s naked lyricism and the pair’s dual guitar attack, Body/Head created improvised discombobulations that dug their way deep into your hippocampus. Throw former Wolf Eyes-man and general disturber of looped sounds, Aaron Dilloway, into the mix and you have something that might intimidate even the most seasoned of Cafe Oto attendees.

Body/Dilloway/Head is a challenging listen but it’s also fun and inspiring. Made up of 3 tracks that range from 6 to 17 minutes long, the (relatively) short form ‘Goin’ Down’ hits weird and fast with Nace & Gordon’s guitars leading the pack. Casually looped and discordant notes are complimented by a whirr of tugged anxiety as if the piece is formed from dancers caught in an endless jive. This jilted repetition is oddly reminiscent of renowned bigot Robert Kilroy-Silk being cursed to repeat the phrase “Take care of each other” at the puckish hands of Chris Morris.

But it is the longer form pieces that gift us moments to cling to, something to use as an anchor. Fuelling the question – Why do we need that?

Opener, ‘Body/Erase’ is best likened to the small boy in Gaspar Noé’s Climax being stuck in a boiler room with a head full of acid. Electronics throb. Garbled voices plunge in from all directions. Their language impenetrable. Sometimes slowed, sped up, pitched beyond recognition. Rewound, distorted. Loops of speech manipulated until the sounds are more akin to struck chords than shaped mouths. The first 10 mins is like trying to wrestle a remote control from the hands of a gradually ageing toddler determined to make use of their newfound proclivity for button pressing whilst Ren & Stimpy skitters, mangles, and flails in the background. But this isn’t random or purposeless, there is a sense of coherence, of understanding to the increasingly deliberate mischief. Rhythms emerge. Sounds swipe like raised hands. It is mutilated to the point of tape disintegration. Strummed notes appear gently through the violent fug. So deftly interweaved with the rioting tapes that they could have been lurking for aeons. Glitching electronics take shape too. These meld and congeal like a sonic trifle left out in the scorched sun. The separate entities all blurring together but making an absolutely lip-smacking concoction. Where others might elbow for priority, the various elements present here embrace and intertwine, thickening the distorted gloop like an unnerving musical hug.

It’s not all frenzied amalgam, however. Just to confound expectations further, a lush build up occurs in the midst of ‘Secret Cuts’. Drone loops veer about whilst Gordon’s voice peers out through cracked goggles, breaking the stumbling, juddering veneer. It’s a dub reworking of ‘Shadow of a Doubt’ by someone with a sputtering electrical system prone to power outages and uncontrollable surges. Slashing guitars tremble beneath reams of electronic hocus-pocus and it all converges to create a demented alchemy that dribbles unsettling gold into wary listener’s ears. It is impossible to predict. It is full of lunges, left turns, cut backs, spins, spirals, back tracks, and halts. It’s like orienteering with magnetised wasps or cooking with a recipe book written by Escher. No sooner are we anchored than the hook is snapped and returned in a new, unrecognisable form. It could be playing backwards or maybe it’s inside out? Oh… No. It’s both playing over each other at once. Every reiteration of the loop is altered. It evolves, transforming, until just as you might expect, it ends just like that in the middle of a sente…