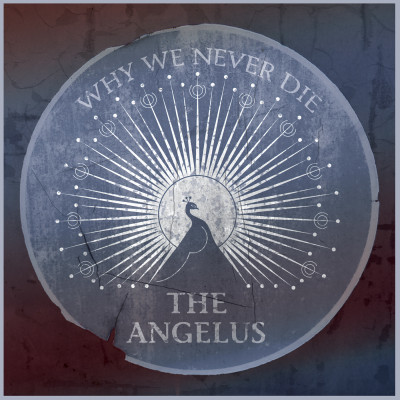 Why We Never Die by The Angelus

There will be no peace. There will be no mercy. Doom is upon us. And yet, the doom that is coming has a fantastic soundtrack. Its finest exhibit is Why We Never Die, the third studio album by Texas doom-folk trio The Angelus. But, despite its mournfully apocalyptic atmosphere, there’s a sense of hope buried within.

Why We Never Die immediately demonstrates two things: that the band have managed to consolidate a core sound from their first two albums, and that they have managed to grow from those roots to produce something truly excellent. Their mix of doom, folk, and post-metal is breathtaking: pacy without feeling rushed or hurried and miserable but not funereal. Reverb in the guitar lines mesh with the ominous rumbles of the bass and the haunting vocals to create a truly atmospheric sound. It’s as if Ancient VVisdom, Lord Huron, and Louise Lemón had a jam session around a campfire out somewhere in the Texan desert. The riffs on offer here are catchy, driving the songs forward with a palpable sense of urgency, but Justin Evans’ drumming keeps things at an even tempo that ensures that the apocalypse being heralded isn’t over in a flash. Instead, it has time to truly unfurl over the listener, anchored strongly by the ominous rumbling basslines of new bassist Justin Ward. Evans’ backing vocals merge well with the mournful keening of lead vocalist Emil Rapstine to create an arresting siren’s call to the listeners, drawing us in.

The question is, to what exactly are we being drawn? According to ‘Hex Born,’ it’s everyone’s ultimate destination: the grave. “Come lay your head beneath this heavy stone/Come carve your given name,” Rapstine intones. Never has the grave seemed so inviting. But there’s more to it than just an invitation to the great hereafter. The idea of carving ‘your given name’ on your gravestone suggests the audience are being asked to shake off our given identities – those thrust upon us by society at large – so that we might assume our true selves. By killing that social identity, we might be reborn into something greater.

Rebirth is itself the central theme of the album. The artwork depicts a white peacock in the guise of a phoenix: blending a bird noted for its beauty with the ultimate avian symbol of rebirth the artwork illustrates the beauty inherent in being born anew. The lyrics might have their own individual meanings, which to truly parse require multiple listens, but the overall thrust of the album is that we need to shed the current skins in which we are suffocating and dying so that we can bring about a better world. This is most explicitly stated in the title track: “from ashes, rise up again.” Personally, I prefer ‘Of Ashen Air,’ one of the album’s strongest. The bleak imagery of the lyrics prominently evokes the fires burning our world down around our ears. But there’s a little surprise in there. Rapstine says “Burn it all down, from the air to the ground, I won’t mind.” It’s not apathy (hopefully). It’s hope for a better future. Burn the current world down so that from its ashes we can build a new and better one. Rapstine sings this above some of the most frantic, driving, urgent riffs of the album, and the melody and atmosphere they all combine to create is beautifully bleak. All of this evokes resignation to the impending ecological collapse of the planet. But in the context of the album as a whole, it feels somewhat more hopeful than that. The song title is also a pun, and a little gallows humour can offer a little hope to even the most miserable of nihilists.

Fortunately, the album’s all-encompassing gloom is a short-lived one – it’s all over in 35 minutes. The same is true of There Will Be No Peace, its thunderous older brother. But there’s never any point at which the music feels rushed. Each song is perfectly timed. Not a moment feels wasted. There is no bloat, but nor is there anything that feels like it could have gone on just a tad longer. This careful composition really helps the themes on display come across without feeling half-finished. Even the more experimental flutters, such as the synth sounds on ‘Another Kind’ don’t feel out of place. I cannot wait to one day behold it all in a live setting. Production-wise, a tip of the hat goes to Alex Bhore, who recorded the album, and Sarah Register who mastered it: between them, they ensure no one member of the trio overshadows another.

That said, Why We Never Die does not present itself as a concept album. This doesn’t mean it is just a disparate collection of songs, however. It all flows together thematically as a cohesive whole. No one song can be taken out, and none of them feel like filler, which really is remarkable. But it is not, at any point, an album that sounds happy. This is, perhaps, a commentary on the nature of hope and rebirth: you have to go looking for hope. Hope is a small thing, struggling to survive at the bottom of Pandora’s Jar, but it is there nonetheless. Rebirth, too, must be worked for. We cannot begin to shed our identities and be reborn into the better world we both need and deserve without working to ensure that that small seed of hope is able to bloom.