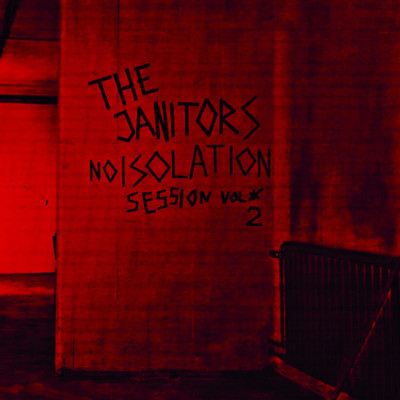 Noisolation Sessions Vol. 2 by The Janitors

Psych bands love a good session, and not the kind of session which involves a bunch of cans and an ounce of weed. Instead a psych band session is a band setting up and jamming through a bunch of songs then releasing them to an unsuspecting public (granted, cans of beer and weed is invariably involved anyway). Slap the name “session” on it and they avoid it being called an actual album. A weird psychological impact on the listener who then judges it as something outside of the bands usual work.

The Janitors love a good session, and here present volume 2 of the Noisolation Sessions. Ironically, volume 1 was, for all intents and purposes, there actual next real album, but then COVID hit, and with nothing better to do, they disappeared into the studio to create volume 2. A much darker beast to its predecessor, the ominous over-bearing world events from the virus plague every pore of these songs. It’s a claustrophobic journey from a band hardly known for their lightness of touch.

Dark, fuzzed out riffs drone into view from ‘Bellwellhell’, a tortuous psych treatment which is the band at their very best. This continues on the grinding ‘Rymdamnden’ and by now it’s clear that The Janitors are not in a good mood. There is a distinct heaviness to these songs which drives a directness into the heart of the music. The Janitors rarely let you down, but here they sound like a band with a purpose as they churn out the riffs into a droned out haze. As the chiming, rotten, industrial,heart of ‘Rymdamnden’ finally comes to a close, anticipation levels of what’s to come are most definitely heightened.

The funky bass line of ‘Hum In A World Of Noise’ sounds almost alien against the twang of the guitar and the song develops into a hypnotic mantra. Almost as if they were the bastard son of Faith & Devotion era Depeche Mode and Joy Division, they revel in the bleakness of sound. As if there is no return, or answer, ‘Vile And Lost’ pretty much eats itself in a squall of noise. By the time ‘Thin Line’ bursts out of it’s lo-fi beginnings it becomes a clanging sound of hell itself. No light allowed in whatsoever, just bleak darkness.

What stands out most in this series of songs is how much The Janitors revel in their own sound. Dark begets darker, and the band become the centre of a ever swirling soundscape of noise, drone, and fuzz. Where in the past they may have gone all out, here they let the quiet invade, and within the ominous sounds are moments of calmer response which becomes almost an acceptance to the inevitable bleakness that surrounds them. ‘Levoton’ truly sounds like the soundtrack for our times, as it slowly builds into a cacophonous noise.

Unlikely bedfellows for what has become known as a “lockdown” album, The Janitors may be the truest reflection of the angst and concern that we have all felt over the last 18 months. That their tour of the UK recently got cancelled due to COVID only makes this all the more meaningful, and you feel that once they do manage to hit the stage there are going to be a lot of like-minded souls ready for a cathartic release from the seemingly endless winter.