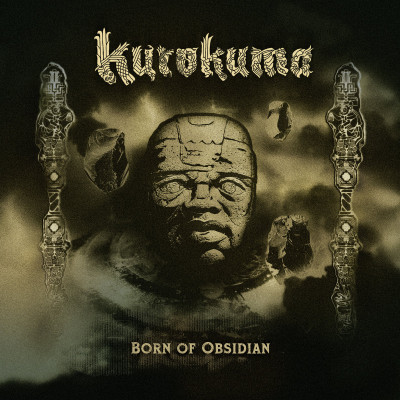 Born of Obsidian by Kurokuma

Sheffield has long been a bastion of heavy music in the UK scene and Kurokuma has been no stranger to it since founding in 2013 and releasing a demo the following year. Although the band has continually released music over the years, Born of Obsidian is its first full length and the wait has been well worth it. A fascinating mix of stoner, sludge, heavy psych and doom creates moments of dark majesty which bore right into memory with hooks and rhythms galore.

Kurokuma takes inspiration from historic studies of Mesoamerican civilisations and the music does a superb job of making those influences clear with stunning song writing. The percussion has a strong hypnotic vibe and when combined with the lead riffs it causes a trance inducing feeling. Lead single ‘Jaguar’ exemplifies this as its swirling guitar is punctuated with cowbell and great use of toms to give a samba sound but instead of a carnival the feverish vocal delivery makes it clear that spirits are being awoken from the ground.

The genres certainly get a good work through here as each track hits something different but the atmosphere is a clear bonding strip through the five tracks. As well as going slow with doomy stoner riffs the band isn’t afraid to let rip either as evident on opener ‘Smoking Mirror’ and ‘Sacrifice to Huitzilopochtli’ where a more metallic attack rings from the guitar and the drums forcefully batter. The balance between the variations is hit perfectly to avoid repetition but also keep a harmony and relationship between the tracks.

From getting hooked on the first listen to ‘Jaguar’, Born of Obsidian does not disappoint. The variety and quality remains ridiculously high throughout and as well as touching on dark ceremony there is also a bubbling rage which explodes with ripping vocals and sublime guitar work. Not only does the album show the almighty power of the cowbell but it also demonstrates how to link a theme to the music without stooping to cheap gimmicks or stereotypes. Born of Obsidian was a long time in coming but the quality in its tracks will ensure it will endure for even longer.