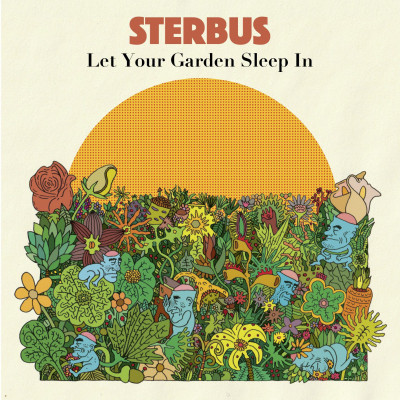 Let Your Garden Sleep In by Sterbus

OK, mention Italian pop to most punters and they’ll probably draw your attention to Måneskin’s glorious Eurovision winning glam-racket ‘Zitti E Buoni’, but they aren’t the only group from that country making catchy, inventive rock. Sterbus (Emanuele Sterbini and Dominique D’Avanzo) have been plugging away with their unique Italian twist on English language pop for some years now. Both are confirmed Anglophiles, with a love of UK acts such as XTC, Cardiacs, and classic melodic 60s rock such as The Monkees, The Beach Boys, and of course The Beatles.

Following up from the epic Real Estate/Fake Inferno double-album, Let Your Garden Sleep In is arguably less frenetic than the previous record, but it is – in its own right – a gorgeous piece of arty whimsy which takes as it’s theme a person from the far future looking back at today, when we had music and gardens, but perhaps didn’t appreciate what we had at the time. Well, when do we ever appreciate what we have? The other thing to note (rare E&D gardening tip here) ‘letting your garden sleep in’ is also the practice of not turning over your soil, pruning, or cutting back soon after the winter – thus giving pollinators a chance to build strength while still sleeping in your plant stems. It’s a gentle image which seems appropriate in an album full of songs which seem like sleeping giants in their own way. I really like the album, it has a laid back, timeless appeal, and is thoroughly deserving of a wider audience both here in the UK and in Italy.

While I would probably frame this album in terms of the less boisterous end of 1990s UK indie, it also has a strong sense of progressive rock – but refreshingly without the bombast – and often the two things are combined to make something altogether transcendental, take in particular the last song on this collection – the sublime eight minute ‘Murmurations’, but there’s also plenty of upbeat numbers, simple, direct from the heart, and the record is all the more powerful for that.

At the end of the day, Sterbini and D’Avanzo are really great songwriters, they manage to mix instinctive musicality with a lyrical playfulness and are unafraid to let different genres cross into their own compositions. Throughout the album you’ll find passages that are Beatles-like or Belle and Sebastian-like, as well as the previous mentioned nods to indie and prog. It’s well worth exploring, as is the whole Sterbus back-catalogue, should you feel so inclined to do.