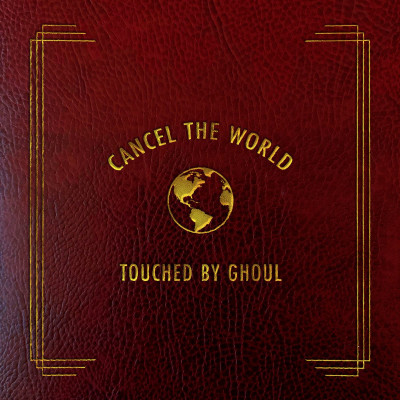 Cancel the World by Touched By Ghoul

Firstly, let’s talk about that name. What’s wrong with a little determiner? Exactly like the one in the previous sentence? It make my brain trip and fall every time I think about it. What would otherwise be obviously sinister becomes alien and uncertain. Touched By Ghoul – What does it all mean?

Well, at least that album title should be pretty self-explanatory though, right? Cancel The World. An ironic statement on the culture wars. If not that then perhaps a wish for the end to our current pandemic scarred existence. Nope. This, their second, album was recorded some time before our factionalised Covid age became quite so established. Looking at the lyrics for the title tune “The skies are burning, and the oceans all turned black, looking now, it all just hurts, make it stop…” it points to another warning of ecological disaster. Maybe it’s more personal than that. I don’t know.

Thankfully we know where we are musically, with this Chicago four-piece being in line with that city’s fine heritage of rock bands and who at times, unashamedly hark back to the golden age of U.S. alt-rock bands of the 1990’s. Angela Mullenhour, who along with being chief songwriter and guitarist is a lead vocalist with the same sort of girlish yet knowingly seductive tones of the Deal sisters and the playfully kick-ass attitude of Nina Gordon and Louise Post of fellow Chicago-residents Veruca Salt. You can get all that from opening tune ‘Better Than Me’, the type of stubbornly buoyant grunge-pop that The Breeders have always excelled at. Built on several catchy-as-hell riffs and very loud caveman drumming from Paige Sandlin, it’s like a charm offensive dressed in stripey tights and a Babes In Toyland t-shirt.

Hang on though, second tune ‘God Hospital’ lunges out on a doom tune that Trouble could have conjured. The torpor is regularly broken up by manic flurries of percussion and the heavenly, lullaby tones of  Mullenhour, although listen to the lyrics and we’re still definitely in doom metal territory “God is a ghost, my friend. And he’s cold”.

That’s the thing with Cancel the World, on first listen you grab onto all the familiar signifiers, but after a few spins you pick up on all the little twists, turns and flashes of individuality that the band (completed by Andrea Bauer on guitar and Alex Shumard on bass) bring to a genre that most of us can dip into with happy if rather blasé confidence. Admittedly not every tune distinguishes itself, and mostly the lyrics are just the wrong side of cryptic to reveal their exact meanings, but what gets you through the actually quite a brief running time is the bands abundant charm and expert way around a catchy riff. Mullenhour has said that most of the band’s songs start from a riff, and that’s easy to believe when you hear numbers like ‘Suicide Space Camp’ which sounds like The Breeders covering early Nirvana, and ‘Yacht Problems’ which rocks like Tad pogoing with The Pearl Harts.

Occasionally songs step out from the semi-oblique into the realms of the instantly profound, such as on ‘Lost at the Costco’, which takes The Clash’s ‘Lost in the Supermarket’ and strips it of its anti-capitalist undercurrent and replaces it with a breezy, suburban ennui. Played, unusually for the band as a gentle acoustic strum it adds a touch of the everyday observational poetry of Courtney Barnett to an album which is probably only missing a bit more of that universal feeling to really make the songs pop.

Generally slow to reveal their meanings but eager get you up rocking, the songs on Cancel The World bear many repeat listens and maybe at some point the band will lean in on the dancefloor and whisper their secrets in your ear.