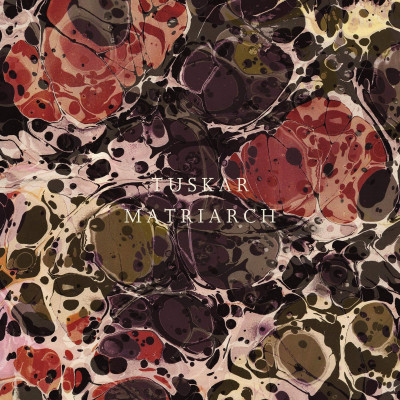 The new album Matriarch, from Tuskar, does not get off to the most auspicious of starts as the deep, sludgy riff of the title track immediately places them as Monolord soundalikes. It’s a somewhat demanding start, but also a bit of a red herring as it is pretty dissimilar to what follows.

Raising quite a profile on the metal scene from some incendiary live shows, their debut album follows on from their Arianrhod EP with some expectation, and for a duo that could be quite a weighty feat. That there are only two members holds absolutely nothing back from the noise that they create though, and once you get past that opening track, you are treated to an absolute wall of sludgy riffs.

‘To The Sky’ is where the album bursts into life as the tortuous riffs of guitarist Tom Dimmock meet the explosive drums and vocals of Tyler Hodges. Again, there are similarities to a multitude of doom bands, but this is music that never really makes great strides, with the point being pure annihilation of the senses. That said, the curveball that is ‘The Trees, The Trees, The Trees’ does show a more progressive side to the band with the acoustics bringing to mind both the quieter moments of Black Sabbath, and the more esoteric fare on the old Vertigo label.

The syncopated rhythm of ‘Halcyon Gilt’ displays a quiet/loud approach to music, although the quiet here is more of a rowdy gallop before the entire world comes caving in on you. ‘Into The Sea’ is head-banging manna which evolves into what is the best track on the album, once again bringing a real progressive edge to their sound. ‘Shame’ drips in heavy emotion while tapping once again into that quiet/loud mentality, whilst ‘Grave’ is a little more optimistic in its delivery, albeit within the confines of the bands doom-filled world-view.

Matriarch is an assured debut offering from a band who offer more than enough to stand out in the current doom scene. Whether there is legs in the two musicians approach remains to be seen, but at least here they demonstrate that they can surely create a noise. The influences are writ large, but they also have an edge which shows they are not afraid to take those influences into new places.