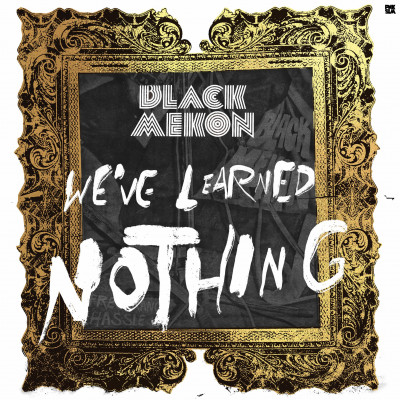 We've Learned Nothing by Black Mekon

Them Black Mekon brothers are back, worrying decent folk with a double dose of grimy punk blues racket. Can you believe it’s been fifteen years now this low rent pair of miscreants been pushing this primal rumble around? Ain’t learned much of anything in all that time and don’t appear to give a damn, free range or otherwise. Indeed, it is perfectly clear that this latest affront to decency represents some kind of defiant and perverse pride in their intransigent failure to progress. We’ve Learned Nothing they holler. With their chosen path being that of the convulsive exorcism at the heart of rock ‘n’ roll, what use then do these boys have for fancy ideas or elegant chord progressions? That stuff just gets underfoot.

That being said, I don’t really know how to explain that We’ve Learned Nothing is basically a concept album and a double at that. Suspect, alien ideas in garageland you’d think, but they never were all that risk averse, or even risk cognisant, I guess. Look, I was wary too but don’t be alarmed. Although this is a two album package Black Mekon aren’t about dragging their feet. The whole thing only runs a couple of stops past your regular old school 45 mins. A sight shorter than the general post-this, post-that, earnest prog tedium and fast and loose enough to hold your attention. Yeah, sure, it all sounds the same, the first album is rockin’ an’ reelin’, the second one all squallin’ an’ squealin’ but you can most definitely eat both in one sitting with no unwelcome bloating or drowsiness.

Speaking of which, the Mekon boys are wanting to have their cake and eat it with the whole ‘concept’ they’re indulging here. The first half is a re-recording of their debut Free Range Hassle with the second being a straight up answer record, updating us track by track on the twisted tales of the first. Things might have changed for ‘Backseat Bebe’, the ‘Mean Drunk’ or ‘Comeback Kitty’ but Black Mekon are an unchanging constant around which this lurid demi-monde turns. Or something. That’s some arch manoeuvring to say you’re still sat in the same chair. This is not a ‘Taylor’s version’ type situation. Pretty sure they weren’t cheated out of a fortune in royalties and there’s no noticeable reworking of the songs.

The idea they might have been after a better quality recording is laughable too, or at least opposed to their myth. Everything is distorted, beautifully so, it’s the absolute heart of their sound but it’s not accidental. You don’t get razor sharp two minute arrangements with decent separation between the competing elements just by turning everything up to 11 and dicking about. Still, what kind of killjoy points that out? Black Mekon world is a strange hyper reality charged with such contradictions. This time out we’re entertaining the idea that one set of story songs is being updated with a companion volume. As if we were dealing with lyrical poets or you could even make out half the words through Black Mekon’s frenzied delivery.

Free Range Hassle 2 matches its predecessor track for track with varying degrees of relevance but wraps up the whole caboodle with an extra final track. Coming at the end of a thrilling non-stop joyride ‘Used To Be Good’ pushes right on over the edge. A runaway train carrying wild slide guitar, overheated theremin and probably as many words as the previous twenty four tunes combined. Hammering out at a hundred miles an hour they seem to tell the story of the band in swaggering style only yelling that “it used to be good” for a chorus. I wish I could make more sense of it, I wish I could see them do it live. Black Mekon are superheroes, when they put on the mask amazing and opposing things are made possible. Ask yourself this though, if someone hands you a piece of cake, what else are you going to do with it?