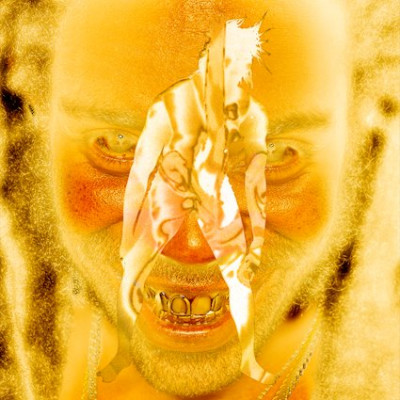 The first time I saw Ho99o9 was at their Brooklyn takeover of my place of work The Lexington, London way back in 2018. That show made me a huge fan, they had props that were being hurled in all directions, (including blood soaked popcorn) and a vicious stage presentation. It was an awe-inspiring performance that I still remember years later, even after the pandemic time warp. I hope that Skin as an album is able to drag me further into the live presentation in a way that the first album didn’t quite manage to do for me, as much as I enjoyed it. I wonder if this second album can finally match the energy of what still remains one of the best gigs I’ve ever seen in my life.

‘Nuge Sight’ opens the album, compressing static into nuclear fission to create an explosive opening statement. From the off-set, there’s shattering electronics, screamed rap vocals and wonky synths. The track’s twists and turns see mild melodic tones bludgeoned to obscurity by noise and dissonance. Isn’t this exactly how you would want an album to begin?

‘Battery Not Included’ has a really engrossing rhythmic pulse in its synthesisers. The lead sound is fucking awesome as well and the track quickly escalates from something trappy into some kind of industrial techno with Ho9909’s signature chaos imbued into every second. The breakdown is almost astonishing when it finally lands complete with a friendly sounding chorus. That is immediately slapped down by belligerent screams. Anyone missing music that is genuinely intense, expertly performed and well-produced, this album is currently unparalleled and that’s even from the second track.

It’s interesting because whilst it seems to fill the gap of early SlipKnot, ’Bite My Face’ features Corey Taylor on guest vocals. The track is probably Taylor’s finest work since ‘Psychosocial’. The song itself seems to fit with the albums ADHD, rapidly rising and falling in dynamic and emotion as it satisfies its own machine gun attention span. The vocals are fucking amazing. The song is heavy as hell. It’s kind of hard to pick it all apart but, I don’t really think this album is about intricate sounds. I think it’s total sensory overload. I can really see how this material fits in with the band’s chaotic live performance. ‘Slo Bread’ ft. Bun B unravels things into a more groove-orientated passage.  There’s a seedy club vibe about the track, everything about it seems waved-out and disorientating. The refrain at the end of the track reminds me of Eminem’s ‘Without Me’, but that’s not a bad thing.

‘The World, The Flesh, The Devil’ is quite possibly my favourite song on this album. The melodic keys at the start sound fucking awesome. The screaming is great. The flow is engrossing and generally, it seems like everything is given room in the mix to shine. Besides, the refrain is really memorable. There’s a vocal moment that I can’t even describe that just sounds like some kind of amazing pitch shifting experiment. The ending is fucking awesome. Reminds me a bit of ‘Ahead of Ourselves’ by Nine Inch Nails. Really cool track. ‘Protect My Bitch Pt.2’ bursts onto the album relentlessly. Like a lot of this album it has a kind of Death Grips-esque trappy chaos about it. It’s bombastic and belligerent and in your face. The ending of the track is extremely animalistic, it’s fucking brilliant. ‘…Speak of The Devil’ is another instant hit with really engrossing and melodic vocals that descend into clear and direct screaming. Another contender for my favourite song on the album.

To be honest, I find it extremely difficult to write about this album because it is so multi-faceted but, I am pretty confident this is one of the best albums I’ve heard for a very long time. No one else makes music like Ho99o9. You can hear that the band like a lot of different music and juggle it all effortlessly. There’s not a single dull moment on the album. ‘Skinhead’ ft. Saul Williams is in many ways, a straight up hardcore punk track delivered with Ho99o9 style production. As a NIN fan, I’m well-acquainted with Saul Williams’ work, he’s a fucking amazing poet, rapper and artist in general. What I’m seeing from this album is not just is it excellent on the tracks with no collaborators but, they’re actually getting the best out of all their collaborators.

‘Lower Than Scum’ takes things briefly into death metal, but thankfully it lasts about as long as death metal should before going into some kind of fucking insane thrash type thing. I do wonder how these guys manage to scream so much and for so long without fucking their vocal chords because it sounds legit. But, I’m in awe. ‘Devil At The Crossroads’ is the one track on the album that didn’t land with me at all but, I’m sure other people will enjoy it. ‘Limits’ ft. JASIAH brings things back on track, the music is great once again but, the vocals on the forefront just have so much energy and ferocity. This is music I want for my dissociative days. Music like this is great for when you’re zoned out cause it essentially jackhammers through the white noise by bashing the listener repeatedly about the ears.

‘Dead or Asleep’ brings the album to a close, the chorus vocals are really interesting again here. I have no frame of reference for what they’re doing off the top of my head. The climax of the song is absolutely unreal. It seems to come out of nowhere. It’s weird the amount of chorus on the vocals makes it sound almost like Ozzy Osbourne at times, it sounds brilliant though. It is such a brilliant conclusion to the album even though, it comes as a massive shock to the system.

Overall, Skin is an astonishing progression for Ho99o9, it brings their live performance to the studio expertly and adds memorable songs to their repertoire. I think the next step for the band is to explore a greater level of dynamic diversity and even more focus on melody, in the same that Slipknot had their self-titled, then Iowa and then Vol.3: The Subliminal Verses which is in my opinion their best album. But, with that said, I fucking love albums that are absolutely relentless and this is almost certainly going to be my album of the year because it is totally unhinged and I love it.