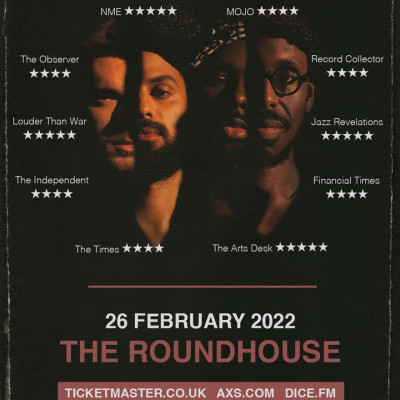 Sons of Kemet at Roundhouse, Camden

Sons of Kemet put on more than just a gloriously fun and energetic show for an audience starved of live music and the buzz of a crowd: London’s finest prog-afrofuturist-jazz quartet makes the former into a political statement.

Rewind a couple of hours and DJs Errol & Alex Rita do a grand job of getting this atmosphere started. Mixing soul, funk, broken beat, and all sorts of other energetic genres to set the tone, people are dancing already and I’m sure I’m not the only one who’ll scour their playlists for recommendations after the show.

Support comes from North London DJ/rapper/producer Lex Amor and strikes a tone which mixes the laid-back with the ominous and the intense. “Are we alive?” asks Lex, and the genuinely rapturous response shows how hyped up this crowd already is: “Yes we are!” Lex’s words are spoken, sung, rapped, chanted, shouted; the beats she stabs into the drum pads are two-step, trip-hop, dub-step. All perfectly supplemented by subtle, lyrical sax and a guy on keys whose playing to my ears sounds like a jazzy take on Kid A-era Radiohead.

Lex was writing during lockdown, with songs considering “what normal means…about needing to go out”. I’ll have to listen to her recordings for further detail, but I catch snippets of dark, brooding lyricism, like the visions of a twenty-first-century William Blake: “On darker days, a hundred angels gathered here.” ‘Through the Night’ is about “making do with the shit,” which seems both personal and political. The final track showcases our saxophonist – until now keeping his lines minimalist – who steps up, firing off melodies that drift and twist without meandering. It’s a short set, lasting maybe twenty minutes, and I could have listened to a lot more.

Sons of Kemet have the best compère ever: the poet Joshua Idehen, whose words bookend tonight’s set as they do the band’s latest album Black to the Future (2021). If he’s exuberant and hilarious in his intro, he’s burning with passion and anger by the set’s close. I’ll never do his intro justice here, but it involves Tupac Shakur turning up at your house, either covered in honey and wearing latex panties, or to play Call of Duty with you all night, according to personal preference. More seriously, however, just in case you’d missed Kemet’s political sub-text (2020’s Your Queen is a Lizard features tracks like ‘My Queen is Harriet Tubbman’ and ‘My Queen is Nanny of the Maroons’), Idehen makes something very clear: “Any Tories or policeman here, the exits are here and here. Son of an immigrant! Just sayin’.”

For the next hour and a half, Sons of Kemet rip through one of the most energetic and uplifting sets I’ve ever experienced. If you didn’t at least attempt to dance to this, you might be a lizard. The set veers towards their latest album Black to the Future, of course, playing most tracks including ‘Field Negus’, ‘For the Culture’, and ‘In Remembrance of Those Fallen’; but also ‘In Memory of Samir Awad’ and ‘Afrofuturism’ from their sophomore album.

The line-up is mainman Shabaka Hutchings on tenor sax, Theon Cross on tuba, and both Edward Wakili-Hick and Tom Skinner on drums. If you’ve ever thought that having two drummers is a gimmick, well, I get where you’re coming from, but this is most abundantly not the case here. The drums in Kemet essentially form a kind of textured platform for melody. Wakili-Hick and Skinner are utterly hypnotic to watch; they’re masters of dynamics and subtlety but maintain unrelenting speed and body-shaking-groove. When they want to, every beat operates as one Big Phat Beat; when they don’t, they trade fills, sprinkle seasoning on each other’s parts or slip it in on the off-beats. They must have their kits tuned to distinguish themselves, and it’s the sharp crack! of a super-tight snare, reggae-style, that lingers in the ears long after the show.

Bro, do you even tuba? Bust out a big bit of brass and you get attention, and the crowd is clearly all over Mr. Cross. His tuba takes the bass frequencies for Kemet. If you’re having doubts about the instrument’s capacity in this regard, do not doubt that the tuba can be heavy: you feel it rumble in your belly. It’s deep, rich, bombastically funky, and surprisingly versatile. Cross is cheeky, too, and he peels out a brash squawk like a vuvuzela now and then, probably just for fun.

Kemet don’t take solos like trad jazzers, but each member does have a moment in the spotlight. The most memorable of these is when Hutchings switches his sax for a wooden flute, in a sudden quiet moment during one of their craziest, most energetic songs yet.

I discovered Sons of Kemet via a Bandcamp search for ‘Ancient Egypt’, because that’s the kind of nerd I am. If the song titles referencing science fiction, black history, and often the combination of both didn’t suggest that this was exactly the sort of modern jazz I was looking for, the Polar Bear references (through former powerhouse drummer Seb Roachford) sealed the deal. Prior to the gig, I listened to their albums a lot and loved what I heard, but it took a live show to really feel their power. Initially, on record, their sound is engaging, complex, frantic and frenetic, with moments of amazingly uplifting melody. Live is a whirling, feverish explosion of colour, rhythm, dazzling musicianship, glorious fun, melodic sincerity, and an utter celebration of what it means to be alive. Life-affirming is too pedestrian a phrase. Spirit-affirming, however, is an adjective made for Sons of Kemet as Hutchings makes clear in his only vocal comment of the evening: “Take the energy you’ve made here with you out into the world. Keep the spirit rising!’ As Hutchings says, “the music speaks for itself”, and – to me – it says that equality, culture and life are the highest values to which we should aspire.

The set closes with ‘Black’, a call for institutional change in the UK – “Son of an immigrant: I AM STILL HERE!” – with Idehen at his most powerful, his most poetic, and his most angry: “Right now, recharge, BURN IT DOWN!” In this way, everything about Sons of Kemet is the antithesis of a Downing Street “party”: a scathing indictment of hypocrisy and inequality, and a call-to-arms for all people to come together to challenge them. Finally, while I can’t help but feel guilty about dancing as the dire situation unfolds in Ukraine, let there be no doubt that Kemet put on an absolute monster of a good time.