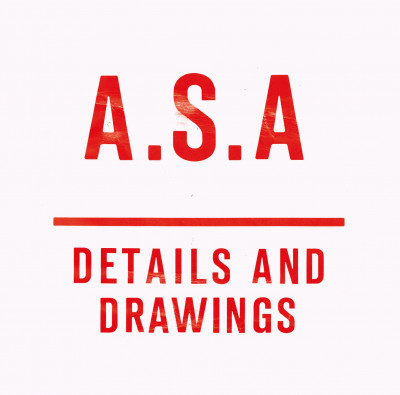 Details and Drawings by All Structures Align

“We’ll take five years but we’ll make all these structures of wood.” This is the opening line of Details and Drawings, delivered in a hushed vocal over delicately picked guitar. Combined with the band’s name and album title it offers a suitably low key statement of intent. Care has been taken here, patience and craft are involved. Everything will be in its right place. It has the atmosphere of a slow and meticulous project created in a shed, away from prying eyes. What’s less obvious at first is that these clean and well proportioned structures do not settle for tradition but unfold an idiosyncratic vision. I’m tempted to say the album has surprises but really even its more dramatic turns come about entirely naturally within the patterns of their sound.

All Structures Align is the work of the Ineson brothers, Adam and Tim. Way back in the 90’s they had a band called Nub. They made a few singles but plans to make an album came to nothing and they kind of disappeared. Nub were not playing britpop, which may account for industry indifference, instead drawing on various strands of the American post-Nirvana underground. You can find their stuff on bandcamp, it does not require a huge leap of imagination to see that the same people are involved here. It’s a bit more ‘post’ and a little less ‘rock’. Careful compositions carried by subtle guitar parts and understated vocals create a flowing and meditative sound.

Tim’s soft vocals are embedded in the songs in a way that makes them simultaneously integral and opaque. I’ve been listening to this album for weeks now and while its slow release melodies have rooted in my mind like I’ve known them for years what he’s actually singing about is still an absolute mystery to me. Their warm and comforting mix of math rock/post-rock/whatever carries you with it, lost in its sway you sometimes come-to in one of the spikier sections with no idea how you got there. ‘Cylinders’ begins in hazy circling guitars and builds steadily over ten minutes to a roaring dystopian end. ‘Springtime 87’ cuts off its shoegazing pop riff for an elongated section of atmospheric uncertainty. It comes back around but as you think it’s playing out they rack up the tension instead.

Every track is a winner and each is different. While the stuff they draw on goes back to the 90’s there’s no real sense of nostalgia or tired genre moves. ‘Cable Street’ might be close to the centre of their sound, unwinding dreamily across oddly ticking percussion and hypnotic, murmured vocals is finds its way to an urgent peak of chiming guitars. After that ‘Exactly According to Plan’ (another perfect ASA title) arrives like sunshine, sparkling and bright, full of effortless vocal melodies and submerged orchestral drama. It’s weightless, breathless and absolutely gorgeous. This might be their first record in over twenty years, and I’m sure they had jobs and families and other stuff to keep them busy, but the music’s quiet self confidence feels like they’ve been steadily working on their skills in the background that whole time. It’s beautifully made, a calming joy to behold.