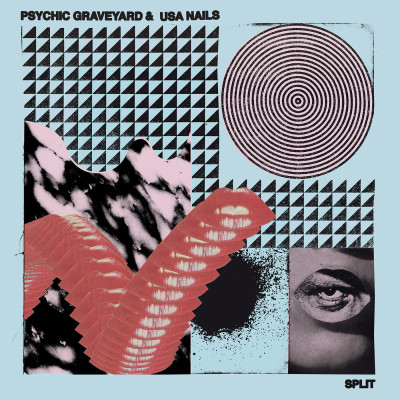 Hands across the ocean. Hands around your throat. US/UK noise punk tag team bring the loud discontent in sharp bursts of tense racket. A meeting of minds. Befitting the current state of their respective countries and the world in general it’s a record of pent up fury. Psychic Graveyard and Skin Graft Records on the US side and, ironically, USA Nails and Box Records in the UK come together finding common ground and hopefully some catharsis in yelling about how terrible everything is.

Up first, the name Psychic Graveyard sounds like a lost Butthole Surfers tune but the band is more in the Devo/Chrome line of attack, dense future noise and squirming sickly electronics. Veterans of several other bands they’ve been busy in their short few years together. First tune ‘Building You a Rainbow’ pours scorn on a partner’s attachment to new age woo while making empty promises to stop mocking them for it. Harsh and hilarious Eric Paul’s vocal drips with such sarcasm it’s almost possible his own sneering superiority is as much the target as bogus spirit animals and tarot cards.

Then ‘Strangest Hobbies’ opens with the sort of religious TV sample much loved by 90’s industrial bands and you realise hostility rather than self reflection is what we’re about here. Apparently they still start these songs on guitar although you’d be forgiven for thinking they’d totally abandoned it such is the mangling it undergoes into raw edged artificial sound. Packed in too short helpings their teeming noise is married to a knack for pop hooks, or at least an unlikely sing-a-long quality to their tunes. ‘What Happens At Zero’ is a point of crossover, a song you can imagine on either side of the record. Rounding out side one ‘Wrecked At The Yankee Swap’ layers some old phone conversation tapes over a slightly more abstract track to winning effect.

USA Nails don’t waste any time, ‘It’s All In The Context’ squeezing an extraordinary amount of song into less than a minute. It’s a fine demonstration of their intense and no fat approach and the compact quality of their tunes. ‘Two Footed Jump Into A Wall Whilst Chewing On Fingernails’ seems a pretty good description of it too. The guitar is more obviously present in their stuff than Psychic Graveyard but here too it functions as a discordant sound generator. Angular, clipped and machine like. Their tunes are claustrophobic and relentless.

I don’t know if the title of stand out track ‘God Help Us If There’s A War’ is a phrase used on both sides of the Atlantic, but here in the UK it’s been a darkly muttered expression of dismay at the younger generation since at least the 60’s. Over churning bass and scalding guitar noise a blank vocal lists points of interest on a tour of the generation gap. “It is not anger about bin collection schedules, it is depression, it is debt” being my personal favourite. Bad tempered but enjoyable Split leaves you feeling a bit bruised but slightly less alone. I’ll leave you to make your own special relationship jokes.