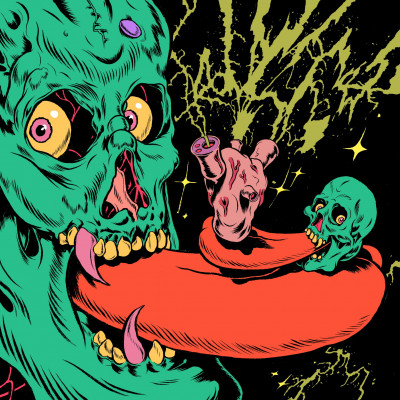 Beware Greeks bearing riffs. Black of hoodie, bearded of chin, Athens quartet Krause play oppressive noise rock in the AmRep/Touch and Go vein. Churning bass, heavy guitars and relentlessly hard drums all coated in that thick lovely distortion you like. After a couple of great albums on Riot Season their third, The Art of Fatigue, pushes everything a little harder and faster than before. It comes wrapped in a truly magnificent sleeve featuring a cartoon skull on the tongue of an even bigger cartoon skull, balancing comedy and menace in lurid colours that seem at odds with the monochrome contents. Musically everything here is loud, bad tempered and in a hurry.

The titles also bear a sardonic wit, which helps as you can’t make out all that much of the yelled and distorted vocals but they say the songs “reflect our disappointment with our own selves and humanity under capitalism” and it’s not hard to pick up the familiar sense of frustration and defeat. There’s not much let up from the storm of despair. ‘Ignorant Acts of Crippled Visions’ powers in on the first of Nick Prapas’ many great drum fills straight into a wall of roaring guitars and screaming vocals. Prapas may well be the star of the record for me, just absolutely smacking his kit as hard as hell, snare cracking right through the hail of distortion, direct but never dull. Powering the whole thing along like he’s dragging the others to go faster.

Most of the tracks here are under the three minute mark. Lead tune ‘The Stuff of Tired Eyes’ is one that runs a little longer with a great tension building intro before racing away like Rocket From The Crypt fuelled by anger and meth. Or possibly just sleep deprivation. This is the album’s friendliest moment, after that it’s back to the brutal two minute beatings of ‘Talentless but Connected’ and ‘Bootstrap Reactionaries and Alienated Intelligentsia’. Bitter and invigorating. They don’t go much on guitar histrionics which makes the widdly-widdly-screw-face solo on ‘Steeped in Disaster’ seem positively sarcastic, especially as its soon dwarfed by squalling waves of noise.

The bendy riff on ‘Stressworld’ reminds me a little of In Utero although the overall sound here is a lot more like Thou covering Nirvana (which is something you should definitely check out if you haven’t). Reviewing bands by pointing to a bunch of other similar ones is generally weak and to be avoided but Krause are so clearly finding their own seat while riding the same bus as Unsane, Helmet, WHORES., Part Chimp and the like it doesn’t even feel rude. If this kind of abrasive aural assault is your thing, you should give them some time and attention. On The Art of Fatigue, Krause get harder, faster, filthier, gnarlier.