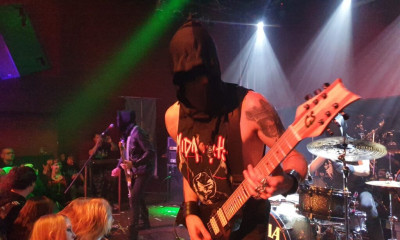 With the tragic postponement of ManorFest 2022, which should have taken place across 27–29 of May in Towcester, Midnight found themselves in Europe, at a loose end and eager to bring more torment to their fans in London. And so a hastily arranged gig was arranged at the New Cross Inn, with their touring buddies, Night Demon, tagging along too.

Both bands make the best out of a bad situation, exacerbated by the fact that the airline lost a lot of their gear on the journey over, although Night Demon at least have their back line to play in front of. If you’re unfamiliar with the venue, the stage is on the ground floor of a high street pub and it tickles me no end to think of locals passing by and catching a glimpse of the noisy bacchanalia happening inside.

Night Demon’s lead vocalist and bassist Jarvis Leatherby relays all the bands tribulations and then screams, “It’s a punk rock gig, right!” Well, in the case of Night Demon, it may be punk rock in spirit, but that’s not where they’re coming from musically. The band play as classic a blend of old-school metal as you’re likely to hear, heavy on the melody and big epic riffs, the one touchstone I keep coming back to is Diamond Head. There’s also the galloping metal of early Maiden in there and the band cover every inch of the stage, flying V’s zooming about like jet fighters as this power trio give it everything they’ve got. Their latest release, Year of the Demon, is a compilation of early singles and cover versions, including Thin Lizzy’s ‘The Sun Goes Down’, which the band play about midway through the set. Now, I’m a huge Lizzy fan and not many bands have the chops or swing to cover Lizzy properly (I’m looking at you Metallica) but Night Demon do a pretty decent job, punking up the latter stages of the song, speeding it up and making it more punchy. I’m slightly worried when after that they go into ‘Overkill’ by Motorhead – is this going to turn into classic metal karaoke? But after a verse and chorus they move back into their own ‘Dawn Rider’. The crowd are lapping all this up, by the way, which is impressive as you suspect their taste generally leans towards the darker, nastier stuff. In fact it could be argued that Night Demon’s heavier songs fare less well tonight, with tracks like ‘War In Disguise’ not hitting home quite as well. The set hits its peak with ‘The Chalice’ and the appearance of the bands own Eddie-esque skeleton figure, who prowls around the tiny stage. It’s a bold move for a support band playing in a pub – but fair play to them, you have to admire their determination to put on a show!

The crowd have barely drawn breath, with many still outside having a smoke and a chat, when Midnight, without any ceremony, hit the stage. It’s kind of disappointing – you expect Midnight, who in so many ways remind me of Venom, to come on amidst a barrage of explosions, a fog of dry ice and after the sacrifice of a least a couple of virgins. Midnight really are a lot more punk than their support act though, and with no backline, no intro tapes and no dancing mascots, hoods aside, this is as stripped down and unfiltered as metal gets.

About those hoods – yes, all three members of the band are hooded and faces covered with black cloth, part Skeletor, part public hanging victim, but what is surprising is how charismatic they remain. Athenar (Jamie, to his friends) is a superb rabble-rouser, when not singing he’s atop the monitors pumping his fists, or banging his head against the neck of his bass guitar; and the unknown guitarist is equally lively, hurling himself about and throwing shapes – they’re another classic power trio, really.

The band draw from the full length of their back catalogue tonight, including early filthy favourites such as opener ‘Vomit Queens’, ‘All Hail Hell’ and ‘Unholy and Rotten’. There’s very little variation in pace or style, you know what to expect with Midnight, it’s just one blackened speed punk banger after another. Don’t know the songs? That doesn’t really matter as with the earlier mentioned Venom, Midnight’s song tend to have choruses that just repeat the title over and over in an unpleasant, agonised growl. You’ll soon be singing along to ‘Satanic Royalty’ and ‘Who Gives a Fuck?’.

Perhaps surprisingly only three tunes from the rather good new album Let There Be Witchery are aired, back to back. The excellent ‘Telepathic Nightmare’ is probably the pick of the bunch, although the slower grinding menace of ‘More Torment’ does at least vary the pace a little for once. You can hardly say the band’s style has progressed much from old to new songs, but I guess there’s less obvious D-beat worship in songs such as ‘More Torment’ than the likes of early template/mission statement ‘Fucking Speed and Darkness’. We do, naturally, get treated to the band’s all time classic ‘You Can’t Stop Steel’ and you know, there’s a little bit of classic-metal crossover there; it’s a song in the mould of Judas Priest and guaranteed to get fists and horns in the air wherever it is played.

And just like that, before you know it, they’re done. The pit, which has been a constant, frothing nightmare all night, dissipates out into the cold rainy night, the wet black leather and spikes glistening all the way down New Cross Road.