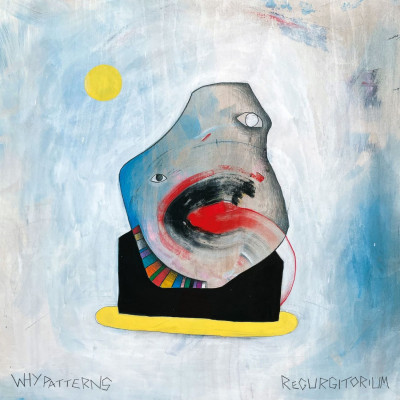 Why Patterns are a talented trio of musicians. Bassist Seb Tull is the drummer in London post-metal greats Wren. Drummer Dan McClennan also drums for experimental noise duo Warren Schoenbright. Frontman Doug Norton is a member of Deleted Narrative. Combine that with the fact that their debut album, Regurgitorium, has been recorded by Petbrick et al’s Wayne Adams, who is rapidly emerging as one of the UK’s most prominent and gifted noise rock producers (notwithstanding his background in electronica), and you have the ingredients for a very accomplished and enjoyable racket. Does Regurgitorium live up to the combined promise of all the talents involved? In a word, yes. Released via Modern Technology drummer Owen Gildersleeve’s increasingly reliable Human Worth label, home to some of the UK’s most exciting, angular, and abrasive noise rock bands like 72% and X’ed Out, Why Patterns’ debut undoubtedly delivers the goods.

As could be seen at the band’s recent gig supporting We Wild Blood at New River Studios in Harringay, the band benefit from a rhythm section that work in lockstep with each other. Opening track ‘Parapraxis’ demonstrates Tull’s remarkable talent for cranking out a trebley racket akin to Daughters’ panic chords on the bass whilst also delivering the track’s rumbling low end. A tricky technique to accomplish in a live setting, certainly, but it works very well on record. McClennan also starts pounding the drums like nobody’s business within the first 20 seconds.

This is not to understate the importance of Norton’s vocals, however. On songs like ‘Bachelor Machine’, the echoey, ghostly-sounding warbling enhances the rhythm section’s malevolence very effectively. Songs like ‘Elective Affinities’ and ‘Wretched Makeshifts’ also showcase Norton’s impressive screaming abilities. At certain points in the verses of the latter song and ‘Unstimmung’, Norton manages to sound like creepy Simpsons character Artie Ziff. On ‘Bone Apple Teeth’, the singing sounds positively deranged, whilst the Lightning Bolt influences Why Patterns cite in the album’s press release come to the fore in McClennan’s drumming. The spoken-word ‘Silentium’ and ‘Quotidian’ are rare but forgivable weak points.

The way in which Adams mixes together a cacophony of conflicting voices chattering over each other on ‘Railway Spine’ really shows how skills acquired as an electronica producer can be transferred very effectively to producing noise rock bands. It’s a counter-intuitive move, but one that Adams has pulled off with great aplomb, and his mastery of both musical forms is on full display in Regurgitorium. It is to Why Patterns’ eternal credit that they selected him as a producer for the album, and the two parties’ respective playing and recording abilities complement each other beautifully. ‘Vomitorium’ makes for a deeply satisfying album closer. Norton cackles along maniacally, whilst Tull’s rumbling bass recalls that of Thad Calabrese from the excellent Austerity Program.

Overall, Regurgitorium is a very impressive debut album. Why Patterns and their producer make maximum use of their sparse instrumentation, creating a sound that is far denser than one would expect from a band comprising a rhythm section and a vocalist (Lightning Bolt have clearly been a very positive influence on them in this respect). Tull’s bass-playing is simultaneously heavy and angular, and McClennan’s drumming works as a robust anchor for the band’s overall sound. Building upon positive impressions they have made as a live band, Regurgitorium serves as proof that Why Patterns are even more talented and intelligent musicians in a studio environment.