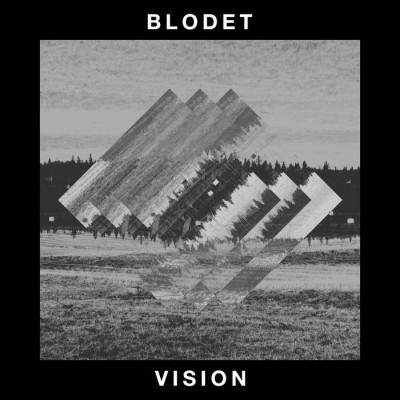 In music circles, it’s a clichéd boast to say “I was into them before they were cool”. Trust me when I say you’re going to want to get into Blodet before they get big. Because, if their latest EP Vision is anything to go by, they’re going to be the next big thing in post-metal.

Not a band interested in conventional song structures, Blodet instead make luxurious post-metal soundscapes. Theirs is not the angular sound favoured by Cult of Luna, nor is it the angst-laden gut-punch of Amenra. On Vision, the band leans closer to post-rock, mixed with doom-laden sound comparable to that of Esben and the Witch. Treating the songs as if each were a classical symphony helps in discussing them: there’s a common theme, a link to all of them, but each has distinct sections. On opener ‘The River’, Heller’s voice drips like honey over a pensive riff. As those languid vocals continue into what might be best dubbed the song’s second movement, the bassline and drums take on a sound like a heartbeat. It is truly a hypnotic experience – rather like staring into the soul of a river. Never once does the tempo feel hurried, nor too slow. It really does pull you in, as if you are being sucked into the titular river.

That restraint continues throughout the EP, allowing ‘She Remains’ to amp up the ethereal nature of Heller’s singing. This gives the whole track the feel of a séance at which a ghost makes an appearance. Her voice haunts the song, hovering just above the ominous bassline and menacing guitar motifs. But when the band finally let themselves off the leash, as it were, at the climax of ‘Vision,’ it is a climax that feels earned, and it hits all the harder for it. Heller’s voice becomes a siren, warning of danger. When the warning dies away, the angular, frenetic guitar riffs that replace it feel like an avalanche enveloping the listener. Or, to tie it in to the title, it feels like a nightmarish vision finally consuming the visionary.

Blodet have released a small handful of singles since 2016. All of them are unique in their own way, but the overall effect is of something new starting to build. The runtime of some songs might challenge the impatient, but plug in some good headphones and allow them to unfurl over you, and you’ll see why the band is such an intriguing prospect. The emphasis on melody makes for a more accessible sound on Vision than is present on earlier works. It also allows Heller’s haunting vocals to really stand out. The title track, which closes the EP, highlights this most effectively. You can feel Heller’s voice work just as palpably as the sense of doom that arises from the murky, rumbling bass and the crashing drums that build together to a climax around the 11-minute mark. After a moment’s pause to let the ears breathe, a frenetic, Amenra-esque guitar then picks things up to push towards the finish, leaving the listener breathless in anticipation for more.

If there is any justice in this world, Blodet will go on to great things. Certainly, based on the strength of Vision alone, they have an enigmatically hypnotic pull that is sure to gain them more and more and fans until they release their debut album. Here’s hoping we do not have to wait too long for that glorious day to arrive.