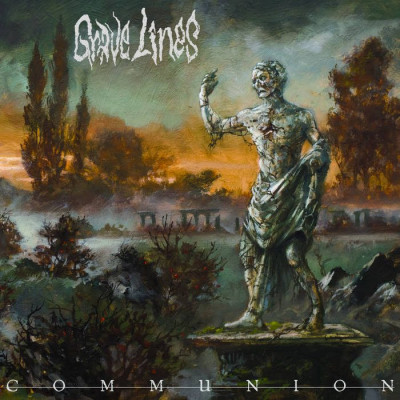 Communion is the latest album from New Heavy Sounds’ masters of sludgy, gothic, doom metal, Grave Lines. It follows 2018’s remarkable Fed Into The Nihilist Engine, a title that ably sums up the experience of listening to the band. Deep, dark and full of woe, this London four piece exude an unremittingly bleak aura of despair, whether crushing you under colossal riffs, chilling you with cold monotonous synths or depressing you with folky, mournful laments.

On the face of it Communion sounds like a cheerier title, being defined as “the sharing or exchanging of intimate thoughts and feelings, especially on a mental or spiritual level”. That is indeed what is going on here, but vocalist Jake Harding’s lyrics, the thoughts and feelings he is sharing, are grimly nihilistic, revealing the very worst of mankind’s personal struggles, brutally exposing the horror of existence.

The album begins with ‘Gordian’, referencing the Gordian knot, nearly impossible to solve, symbolising perhaps an unending search for salvation or enlightenment “you are nothing wrapped in pain”. The song moves from a fairly energised riff, to slow grind and ends with a howl of blackened intensity, as if a fierce fight has slowly come to a terrifyingly bad conclusion. Right from the offing it’s fair to say that the work of guitarist, Oliver Irongiant, is very impressive. He has the knack of playing everything ‘just so’, never a note or riff out of place. Always serving the song, he always creates the required atmosphere without over-playing.

We move onto another lively (for Grave Lines) number, the intriguingly named, ‘Argyrphaga’. The only reference I can find for this word relates to a Costa Rican parasitic wasp that forces a spider to make strong webs to host the wasp’s cocoon. This concept of parasites and of malevolent outside forces controlling your body seems common amongst the band’s lyrics. The songs are rife with Cronenberg-ian body horror, skins are created and shed, tongues are uncontrollable, and pieces of your body are hacked away. Again the song breaks down, this time into shuddering, crashing chaos, feedback and screaming.

The eleven minute ‘Lycaenid’ (a type of small butterfly), showcases the band’s more gothic, atmospheric side with beautiful post metal guitar lines and Jake’s fine clean singing voice. A crescendo is reached halfway thru the song with more ,refined but enormous sounding riffery, tremolo picking and Staggerin’ Matt’s deep, deep bass emanations. An acoustic guitar then emerges for a folky denouement as Jake croons “when you awake you’ll find another empty cage”. Harding uses the imagery of cocoons, as if a creature is constantly changing shape, never settling on a satisfactory one. In general on Communion the bands mix of styles is more cohesive, whereas on the previous album we had a folky song, then a heavy song, then an electronic one. ‘Lycaenid’ moves beautifully through many moods and shows the bands growing mastery of progressive song writing.

The brief ‘Tachnid’ (a parasitoid fly) startles, shaking you from your calm. Nothing but a bleak, harsh electronic drone with Jake shouting furiously over the top, it shows a different use of electronics by the band, who on ‘Fed Into the Nihilist Engine’ used them for the softer moments – clean, almost pretty interludes between the filth, whereas here ‘Tachnid’ is possibly the heaviest track on the album.

We haven’t yet mentioned new drummer, Sam Chase, who has replaced the excellent Julia Cooper, and it’s time we did as his performances are notable on the next two tracks. Cooper’s slightly unorthodox, less is more style was another winning element to Grave Lines moody brew, but Chase does lend enormous power to the heavier moments, including the stately, Sabbath-esque ‘Carcini’ (a paristic barnacle) and ‘Broodsac’ (a parasitic flatworm – look that one up yourself, it’s particularly gross!). ‘Broodsac’ whips along on a magnificent, circular riff from Iron Giant that summons up classic Celtic Frost, a band I’m often reminded of when seeing them live. In truth we could do with one or two more of these direct, full-on metal assaults as the album can be a challenge if you’re not giving it your full attention, the heavy gloom and endless misanthropy makes for a foreboding listen.

The closing ‘Sinensis’ begins with Jake Harding singing solo, a beautiful croon, leading into acoustic guitars. The song then builds into an industrial epic, synths pulse, a simple drum pattern grows in power and guitars move from classic doom metal simplicity into elegant, post-metal artistry. It’s a sophisticated, slightly restrained end to the album that has built itself on harsh, pummelling spitefulness and signifies the band’s continued creative development. And ‘Sinensis’? – it’s a tea plant, so we finish with a nice soothing brew after all the torments of the body and soul. Grave Lines, you are spoiling us!