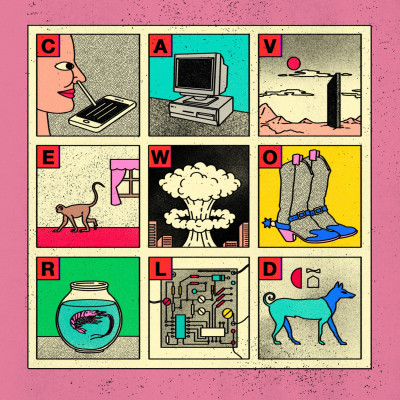 Dogs! Drugs! Scumbags! Shrimp! Viagra Boys lead singer and song writer, Sebastian Murphy, is a man of curious obsessions, to which you can now add cavemen and conspiracy theorists. Cave World is the band’s third album, and you may be surprised to hear, their second concept album. 2021’s Welfare Jazz was largely the story of a bad boy settling down, moving from the unpleasant moocher of ‘Ain’t Nice’ to part of a happy, dysfunctional couple on ‘Despite Ourselves’, the woozy cover of the John Prine classic which closes out the album.

How much Murphy’s lyrics are autobiographical is always up for debate, certainly the frequent odes to douchebaggery, to which we can now add ‘Punk Rock Loser’ and ‘I Ain’t No Thief’ seem to based upon Murphy’s past, but on Cave World we go deeper with freewheeling ponderings on his mental health struggles and surprising evolutionary theories. It all comes to a head on the soul-inflected ‘The Cognitive Trade Off Hypothesis’ in which Murphy relays the idea that we are descended from the weaker apes, pushed out of the trees by their communities, developing language to better deal with the new dangers on the ground, losing our detailed short term memories and other crucial skills. “Is there some sort of connection to my A.D.D?” Murphy cries. It’s pretty deep for a man perhaps still best known for drawling “wiener dog” on the single ‘Sports’.

On the breathless, post-punk funk of single ‘Troglodyte’ Murphy suggests that some of us are still evolutionary dead-enders, describing internet trolls and mass-shooters as cave dwelling outcasts. On the punishing squall of ‘Return to Monke’ they combine the ape chat with the conspiracy theorist stuff. In what is probably a typical unscripted, epic, freeform rant, Murphy brings in Covid 5G loons, a plea for a simpler life where we return to the jungle and spend all day masturbating and a chilling spoken word part where a beheading takes place in a Japanese office and how the event is calmly dealt without any emotion. What Murphy seems to be driving at is that mankind’s evolution cannot keep pace with the modern world we have created. We are all still monkeys or troglodytes, hankering for a simpler life, unable to assimilate, baffled, frightened and incoherently furious.

There’s no doubt to me that Murphy is becoming one of our times most entertaining lyricist and he provides another incredible performance on ‘Creepy Crawlers’, which has all the queasy, maniac glee of Jello Biafra’s solo records. Here Murphy plays a part (I hope) – an internet ghoul, spreading rumours and expressing horror at kids being harvested for their adrenochrome by lizard people and creepy crawlies in the Covid vaccine, collecting information as they scurry through our veins. “I told you to do your research, man!”  It’s flat out fucking insane and sickly addictive.

As previously stated there are still the obligatory scumbag anthems that we’ve come to expect. The banging, rave funk of ‘Ain’t No Thief’ and ‘Baby Criminal’ are both guaranteed to get you dancing wild eyed and sweat-stained. It is tunes like these that make you appreciate what an incredibly tight outfit Viagra Boys are, this Stockholm-based rabble are like a cross between LCD Soundsystem, Gang of Four and the JB’s. I can’t wait to catch them live next year.

Last time out on ‘Despite Ourselves’ the band hooked up with fellow outsider Amy Taylor of Amyl & The Sniffers and here Jason Williamson of Sleaford Mods joins in the fun on the Beck-ish, hiphop blues of ‘Big Boy’. Williamson comes in near the end to continue the bigging up “In a room full of privileged villains, let’s have a real baddie”. It’s not the best song on the album, but as a guest spot, it’s on point, and who wouldn’t jump at the chance to get involved with this incredible band?

Viagra Boys debut, Street Worms, was gloriously eccentric though perhaps a bit too sprawling, whilst Welfare Jazz was a little constrained by its concept, Cave World may have got the mix just right. As profound as you’d ever want a party band to get, Viagra Boys are the drinking man’s thinking band and right now they seem unstoppable.