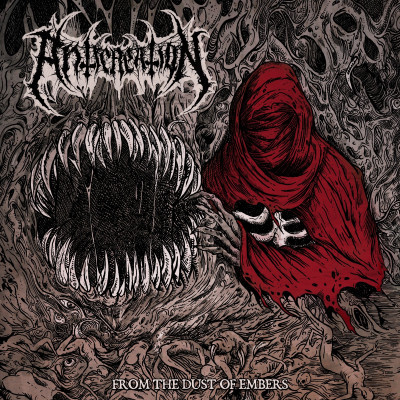 From The Dust Of Embers by Anticreation

>Mysterious Greek duo Anticreation seem to have materialised out of thin air, as if emerging from a smokey black cloud of nightmarish abhorrence with the aim of spreading their misanthropic vision across this earth. Very little is known about the grim twosome, whose faces are concealed by the blackest of hoods like corporeal Dementors.

The band consists of Necro on guitars, a man well-known on the scene having played in bands such as Merciless Crucifixion and Burial Hordes and Noctus on bass, with both sharing vocals duties so seamlessly that it’s difficult to tell them apart. One is raspier and one has death growls and when in alliance is like one formidable and wretched entity. Joining the duo on drums is the insanely talented young session musician Krzysztof Klingbein whose drum cover videos I’ve been enjoying for years.

Title track from the debut album From the Dust of Embers immediately kicks up a storm of malefic dirt, wasting no time by slapping you across the face with swirls of unholy dissonance, thumping blastbeats and lumbering, sharp guitar strikes shredding ominous riffage. Simple in execution but still dripping black with asphyxiating terror. ‘Abomination Reborn’ slowly builds up in measured tension, carefully seething and rising to severity like an abhorrent, hulking beast crawling free from stigian depths. Sinister and doomy stringwork alongside baleful, threatening tremolos soon bring us to a storming rhythmic section of groove-laden beats. Shackles unleashed as Klingbein’s devastating blastbeats tear through an assault of menacing tremolos.

‘The Last Perception’ delivers on all deviant levels, making this one hell of a rager that delves into various horrific depths of blackened, vitriolic metal. Finger-flaying whirlwinds and cataclysmic riffage lead a furious onslaught into quaking blastbeats before easing off into an angular climax. ‘Unborn’ is a hideous, shapeshifting entity slithering from the most brutal outerworlds, blazing with dissonant, atonal anger and fiery, venomous riffs. Mid-pace blasting carries imposing stringwork throughout utterly sulphurous realms of darkness and Necro’s cruelly twisted, serpentine shredding will be burnt into your brain for days. Spoken, Cshiser-like vocal declarations add another portentous, nuanced layer giving this track a ritualistic feel and my personal favourite track of the album.

Anticreation play abstract death metal from the convulsing hellscapes and void-worlds of the blackest places the soul can bear. It’s utterly abyssal and cavernous with a dense, claustrophobic sound seemingly pulled from the mouth of hell.

This is slamming, blackened, avant-garde death metal and utter chthonic chaos of the highest order. It’s raw, suffocating and crawling with despise, spewing absolute bile. It’s the genre of music that makes you feel like horrific, oily-black tendrils are consuming you into the dirt below. From the Dust of Embers is a satisfying and scary release and this terrific band will be the scourge of this putrid creation.