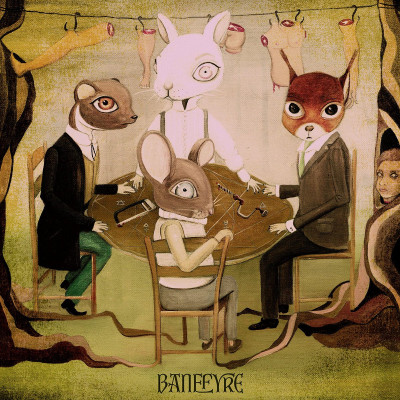 Since their inception in 2004, Crippled Black Phoenix (under the tutelage of multi-instrumentalist Justin Greaves) have been a voice for the voiceless with their distinct and unique sound. The constant companion for Greaves is Belinda Kordic, whose voice adds a tenderness and beauty to the often-dark tones of the instrumentation. These two artists have always sought to shed light on the human condition and inequalities that befall humankind and its creatures. With their new album Banefyre, the band really set about challenging not just themselves, but also the listener, with some seriously weighty music and themes.

Adding in new Swedish vocalist/guitarist Joel Segerstedt, the band also feature the sublime talents of Helen Stanley (piano, synth, trumpet) and Andy Taylor (guitars). Recorded in Lincolnshire and Sweden and mixed by the brilliant Kurt Ballou, this album sounds fucking immense from start to finish. Greaves was conscientious of not making another album that sounded like previous albums, and he has certainly succeeded with that. Clocking in at almost 100 minutes, I had intentions of writing a concise review, but that’s nigh on impossible as there is so much going on that warrants mention.

The striking ‘IntroIncantation’ is possibly the weirdest start to any album I’ve ever heard. After a minute of terrifying otherworldly tongues, perhaps casting a spell, the introductory piece is a spoken word monologue referencing Steve Jobs (“that motherfucker”), being born rich, Lucifer, dreamers, Salem Witches, the different, and there’s a general sense of a bloody and violent uprising incoming. Actual opening song proper is the booming ‘Wyches and Basterdz’ which swings in with a sturdy and regal proclamation of clattering drums and distorted guitars. Belinda’s voice is sweet yet chilling, pitch shifted to add an eery menace. There’s not another band on the planet that create music this magical and powerful. As the track erupts into a powerful finale the tone becomes hellish with an undercurrent of growled voices and ghostly twists.

When I first listened to ’Ghostland’ on my own I felt a presence behind me, the droning witchy chants and throbbing grinding menace of the song bringing a fear that I’ve never felt before listening to music. This is some seriously powerful shit at work on this album. The atmospherics the band create are hard to describe, you need to hear it, feel it for yourself. ‘The Reckoning’ begins with the sound of a hunt. Crippled Black Phoenix have long been very vocal in their disgust at such vile activities and the first song to feature Joel on vocals finds him angry and ready for action growling ”the time has come, to pay the price, the cruelty’s been going on for years, the hunt will take a new turn, cause now the rules have changed”. As the track swells with thunderous drums and furious guitars Joel leads the charge for “retaliation”. It’s impossible not to be swept along in the moment, the adrenaline pumping through your body, this will be immense live.

‘Bonefire’ is one of those dark ‘pop’ moments that Crippled Black Phoenix like to surprise us with. Swirling guitars and a shimmering lead line drop down to allow Belinda to sing a tender and lovely melody over some hefty chugging guitars, before Joel joins in for the chorus asking “how do you sleep at night?”. The musicianship on display throughout this album is exceptional and the end guitar solo that sets fire to ‘Bonefire’ is simply exquisite. Up until this point there’s been a relentless bleak anger and fury driving the music on, so the reflective shimmering guitars at the start of ‘Rose of Jericho’ are the first real moment of melancholy and relief. Erupting into a glorious full-on crescendo like Godspeed You! Black Emperor, the added choral voices bring a euphoric feel and little light to proceedings. As if it’s too much, Joel swoops down, like the prince of darkness, as the track is enveloped by murky guitars and ghostly tones. Reaching out to an exhaustive 13 minutes in length the band head into an instrumental passage that rages like a tempestuous ocean, rising and falling with force and grace in equal measure.

The terrifying ‘Blackout77’ (about the 1977 New York Blackout), is immersive and cinematic with some John Carpenter-esque synths and sampled speech excerpts from an American news channel. The vision the song creates is apocalyptic and set against the backdrop of real-world horror, a little too close for comfort. Even when the song cracks into a gloriously melodic section it still feels absolutely nightmarish. Joel appears to revel in the trauma and horror (perhaps in the mindset of a looter) roaring “who gives a fuck about tomorrow? Because tonight I really feel alive!”

The elegiac guitars opening ‘Down the Rabbit Hole’ are weirdly comforting but that’s soon dissipated as Belinda shakily sings the opening lines. As the music gets louder, she sings with defiant vigour “To the rescue, there’s a place I know…Hey there darkness, you were so bold, I’m stronger than you…you have no claim to my soul”. After a passage of experimental trippy atmospherics, the final moments of this 10-minute opus elevate to a progressive metal section. Eventually Belinda intones that “we’re gonna be alright” and as the band soar with some uplifting gang vocals you finally feel like the dark clouds that have been encircling are parting for some life affirming rays of hope.

‘Everything Is Beautiful But Us’ is another gloriously uplifting song with some warm and memorable melodic guitar lines, like a merciful oasis in a never ending desert of lost hope. Yet it still retains an overriding feeling of impending doom. ‘The Pilgrim’ opens with Love era Cult swirling guitars, creating a kaleidoscopic soundscape, as Joel finally sounds like he might be seeing some light “I feel so desperately alive…I have found a little spark”. The track ends with a flurry of psychedelic guitar soloing and mountain sized drumbeats. ’I’m OK, Just Not Alright’ creepily starts with the sound of crying and a broken fairground ride, before striking doom laden guitars drop a mother load of damnation. Yet there is a transcending hope in the guitars that swoop down between Belinda’s melodic verses that reference a face being well slapped. I find a wondrous comfort in the gorgeous guitar arcs that rise at the end of this song as Belinda sings a beautiful line “I’m Ok, but I’m not alright”.

‘The Scene Is A False Prophet’ may have the title of a GY!BE track but the rolling pianos and tumbling drums have a warmth and a yearning that band would rarely engage. With the guitars left to one side, there’s a languid calm to the song for the first part. But from the ether, you can feel the tension rise and the fear return as the song veers and lurches wildly like a plane dropping from the sky. As droned sounds screech and shriek, the track does eventually twist into something the aforementioned cinematic post rock pioneers would create. As the guitars feel their way back, the song ups the volume and the rage, the dynamic twists are truly astounding and brilliantly crafted. As I said earlier in my review, there is some seriously powerful shit at work in this album. How can Crippled Black Phoenix ever attempt to better this? They must have been exhausted pouring over the detail in this album. The instrumentation is so densely layered, so deep, so fucking epic, that it beggars belief how it has so much going on.

What should have been the end of this immense album is eventually and downright perversely given an almighty kicking with the full-on metal onslaught that is ‘No Regrets’. With punk rock fury Joel screeches and wretches a foul vocal turn over murderous riffs and pounding drums. Perhaps this is the band just kicking out the jams after the intensity of the previous songs, letting all of that pent up anger and fury at the state of the world out in one violent vomit to remind you to not let down your guard and FIGHT!!!! (Just remembered, they ended their last album in a similar way).

With Banefyre, Crippled Black Phoenix have created an album that is truly mesmerising with so much content yet is one tough bastard to sit through in a single sitting. You really need to get strapped in and let the music take you on a journey. Past recordings have maybe found the band slip into something more comfortable, but there is no doubt that the state of the world today, has caused the participants to have newfound fury, fire, and ultimately heartbreak, at what people have become. This is not an easy album to listen through. This is the sound of a band at the absolute height of their musical ability reaching far into the depths of their creative minds. Banefyre is a vital record for these terrible times.