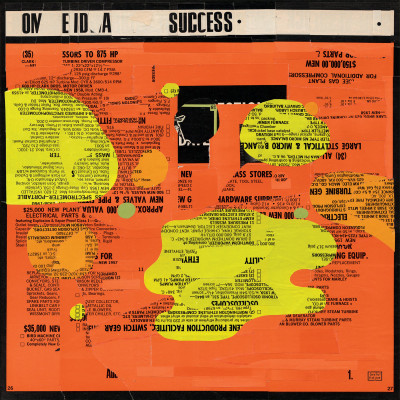 At this point Oneida are a venerable Brooklyn art rock institution, having produced over twenty years of exploratory music drawing on a wealth of previous experimental strands but always stretching and renewing them through their own idiosyncratic lens. That said, they’re still more of a hidden gem than a marquee attraction, tucked away on a side street behind an unspectacular frontage, sought out by the curious and devoted. A band beloved of other bands and music geeks, who’ve maintained a lower profile than comparable long running acts like Yo La Tengo or Tortoise. Maybe that’s deliberate, maybe they don’t care, maybe they’re just too odd. They’ve certainly pushed pretty far out into abstraction at times but Success marks something like a return to first principles, a streamlined and accessible version of the band that could offer a welcome introduction to the unfamiliar.

Success is a fun, summery, record. Upbeat and bright. ‘I Wanna Hold Your Electric Hand’ comes on like The Replacements do Stereolab before expanding into a beautifully layered final section topped off by a bright circling melody that can’t fail to make you smile. ‘Beat Me To The Punch’ opens the record with a one chord two chord indie-rock jank that zips along and gets split apart by a wild in-the-red solo that recalls The Velvets’ ‘I Heard Her Call My Name’. A distillation of minimalist rock ‘n’ roll spiced with a more avant garnish is the drink of choice here.

It’s been four years since their last, Romance, the longest gap between albums of their long career. A result of the recent corona virus misery. If we might have expected another bumper three disc concept extravaganza from that it’s clear the band have felt a little more urgent once they finally got to play together again. Shorter, sharper, tunes and a much shorter runtime. If there’s a track on Romance that points towards Success it’s raging outlier ‘Cockfight’. ‘Opportunities’ rushes past in two New York Punk Rock minutes and feels rudely truncated as if it crashes into a wall. Likewise ‘Rotten’ is a short ‘n’ snarky rager that throws in a handful of random old Fall lyrics for good measure. Repeat listens reveal its scratchy rumble is delicately offset by a sweet and minimal organ part hovering in the background.

Of course, they haven’t gone fully Ramones and these more tightly structured songs alternate with a few looser jams. ‘Low Tide’ sees them stretch out a little, while ‘Paralyzed’ really breathes deep and opens out to let the krautrock in. By the band’s own standards it is still a fairly contained and well organised groove on familiar moves. The final track ‘Solid’ perhaps leans hardest on the prevailing framework of Velvets + Can filtered though their own impulses. These are well worn influences and Success is an album that moves within a well established tradition but it never drags or pales. Oneida are smart and self confident enough to openly channel their sources to produce music with its own energy and vitality. Unlikely perhaps but for some of us this is the feelgood sound of the summer.