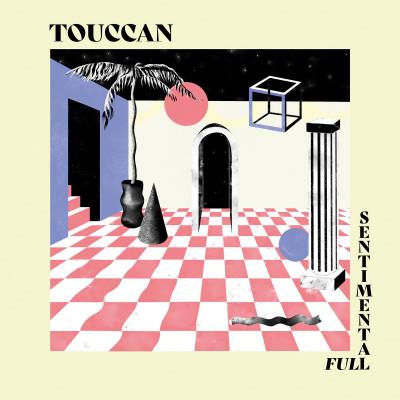 When it comes to debuts, there’s always something quite exciting about a band who sound familiar, as if they’ve mainlined directly into a part of your adolescent ego, yet somehow defy classification. Case in point, Touccan. The Lyon duo are, on the surface, a jaunty math-rock powerhouse, all brimming over with squiffy melodies and off-kilter tempo shifts, but then they throw out some screamo vocal licks, or a post-rock cascade of sound, or even little glimmers of gorgeous simplicity and all of that pigeonholing goes out the window. All of this, though, feels timeless – the hooks, the vocal delivery, each twist and turn; it all feels like a loving homage to decades listening to heart-on-your-sleeve bands that sparked lifelong obsessions for so many of us.

As both a two-piece and as a unit that largely eschews vocals (only 4 of the 11 songs here have any lyrical component), one of Touccan’s most surprising strengths is they are remarkably expressive. They switch up styles and tempos with frequent abandon but demonstrate a degree of control in their diversions, making each twist a fluid movement that furthers an emotional narrative. ‘Silky Walrus’ is bouncy and optimistic, its juddering stop-start rhythms feeding a sense of doubt that gradually comes to dominate the album; ‘Siistiä’ mirrors this, a brisk intro filled with hope descending into a melancholy mid-section and just enough distortion to unsettle.

Part of the reason that their approach works is that they never try to be more than they are. No matter how complex it gets, they always sound like two musicians. Rather than burying compositions under walls of sound and cluttered loops, the sound of Full Sentimental is clean to a fault. Both Val (drums) and Clo (guitar) err on the side of restraint and the sense that both are working on the same wavelength is evident. There’s a lovely synchronicity when they dip into a particularly weighty crunch (check out ‘Ça va aller Jacques’ for a lesson in just how well the two can turn on a dime) and it lends an additional emotional weight where often there isn’t one being openly expressed.

he lyrical elements are equally diverse, often focusing on an earnest scream that wrenches feeling from the air with every syllable, but with the inclusion of euphoric gang vocals (‘Sta Piangendo’) and soft vocal flutters that hang in the air like the down of angels (‘Niemand’), they manage to tap into the same unpredictable energy of their melodies. Both hard and soft comfortably co-exist, and there’s a joyous weirdness as they meld and juxtapose elements that wouldn’t normally find themselves on the same record, let alone the same song.

As if all this hasn’t made it clear, Touccan are a promising band. Both are capable musicians with the chops to nail a wide cross-section of styles with minimal embellishment, and they are already showing that they can sound eclectic without sacrificing melody or momentum. More than that, they’re simply a fun band to listen to. ‘A New Name For Some Old Ways Of Thinking’ is the kind of brash, jangling ditty that is just made for repeated summer listening, be it on the road or simply jumping around in your bedroom like someone half your age, and Full Sentimental is so full of these triumphant moments that it could quickly become your new favourite record without your ever realising it.